Back to homepage »
Share:
At a time when the world is fighting the pandemic of the coronavirus and the number of infected people is increasing hour by hour, the Croatian Army has once again put its capabilities and resources at the disposal of the Croatian people. 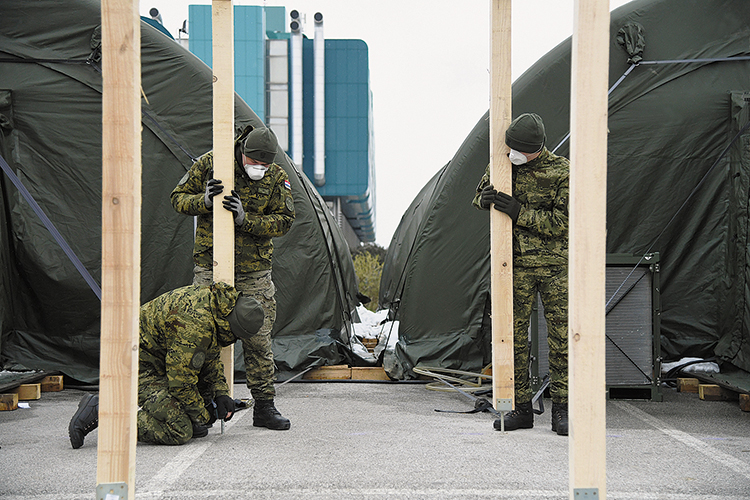 Members of the Croatian Armed Forces are providing assistance to the citizens  during the COVID-19  pandemic – a self-sustained expeditionary camp was set up in front of the Dubrava Clinical Hospital within two days, and are ready to do more, and in support of the Civil Protection Staff

At a time when the world is fighting the pandemic of the coronavirus and the number of infected people is increasing hour by hour, the Croatian Army has once again put its capabilities and resources at the disposal of the Croatian people.

In just two days members of the Croatian Armed Forces set up an expeditionary camp with the capacity of 270 beds for the reception of patients with coronaviruses in front of the Dubrava Clinical Hospital in Zagreb. The decision to engage the Croatian Armed Forces as a component of the Homeland Security System to provide  addiditional space for medical care of patients through the setup of a self-sustained camp and Alaska tents for a primary intensive care to  assist the Ministry of Health was adopted by the Government of the Republic of Croatia, as a function of the need to implement measures to protect the citizens of the Republic of Croatia during the COVID- 19 epidemy.

While the set -up of the camp of the kind normally takes five to seven days, the members of the Croatian Armed Forces managed to pitch the tents within two days only, says the Commander of the Support Command Major General Mladen Fuzul.

It is a self-sustained 15-tent camp that accommodates a unit of 300, primarily in the initial phase of combat and peacetime operations in extreme conditions, but is also intended for civilian use in the event of humanitarian disasters.

“The camp is a self-sustained facility, but in this case is used for accomodation only. In this phase the unit can accomodate over 200 persons“ said Maj.Gen.  Fuzul.

The camp was toured by Prime Minister Andrej Plenković, by the Defence Minister Damir Krstičević and by the Minister of Health Vili Beroš, and the Chief of the General Staff of the Croatian Armed Forces Admiral Robert Hranj and the  Commander of the Support Command Major General Mladen Fuzul presented the function and purpose of the expeditionary camp in combating the COVID-19.

Prime Minister Plenković expressed gratitude to members of the  Croatian Armed Forces and to the Defence Minister for the swift and efficient response and for the camp set-up, and also to the Minister of Health and to the Dubrava Clinical Hospital Director Prof. Dr. Srećko Marušić and the Hospital staff for the succesful coordination.

The Minister of Health explained that the Dubrava Clinical Hospital was planned to accommodate patients should the University Hospital for Infectious Diseases capacities become overstretched, and expressed  the hope that the situation would not escalate to the point that all available capacities were needed.

On 21 March the camp was toured by the President of the Republic and Supreme Commander of the Croatian Armed Forces Zoran Milanović, accompanied by the Defence Minister and the Chief of the General Staff Admiral Hranj.

“I came to see firsthand what I already know – the Croatian military is ready to complete a task within a very short time. The camp has been set up,and I hope there will be no need for this capacity. To combat the disease it is necessary that everybody acts responsibly“, said President Milanović.

The Supreme Commander commended the contribution of the Croatian Armed Forces and of the medical personnel and expressed the hope that the situation would end as a valuable disaster management drill.

Minister Krstičević underlined the engagement of the Croatian Armed Forces to assist the Croatian citizens in COVID -19 pandemic crisis.

Having set up the self-sustained 15-tent camp at record speed, the members of the Croatian Armed Forces (the personnel of the Support Command and of the engineer component)  also built a roofed space – a 350-m communication corridor  – connecting the Dubrava Clinical Hospital with the tents within the Camp.

A member of the General Logistic Support Battalion  of the Support Command 1st Lieutenant Vedran Jemrić said the communication corridor was built to connect the camp with the hospital entry, and the Alaska tents were interconnected  to enable protected movement of patients through the camp.  The task normally takes up to 10 days, said 1st Lt. Jemrić.