Back to homepage »
Share:
The eighteenth anniversary of the establishment of the International Military Operations Training Centre was marked in Barracks “Vitez Damir Martić” in Rakitje… 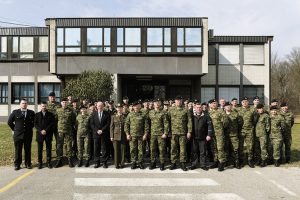 The ceremony, which was held on 1st March, was attended by the Commander of the Croatian Army Major-General Siniša Jurković, Ret. Major-General Jeronim Bazo and other military and civilian guests.

General Jurković greeted the guests and congratulated the commanders and the employees of the International Military Operations Training Centre on 18 successful years of operations. He pointed that that it had been them who had been training enlisted soldiers, NCOs and officers to become promoters of peace, tolerance, co-existence, human rights, justice and democratic values in parts of the world that are affected by crises and conflicts. He also reminded that the Croatian Armed Forces continuously developed their international activities and planned out new areas of co-operation. Therefore, new requests related to the training of the members of the Croatian Armed Forces for deployment into missions and operations were being made all the time. “I expect the employees of the International Military Operations Training Centre to continue conducting pre-deployment training as successfully as they have done until now,” General Jurković concluded.

The Commander of International Military Operations Training Centre Colonel Ivan Miloš thanked everyone for coming to the ceremony and recalled the Centre’s wok so far: “To date, the Centre has conducted pre-deployment training for numerous peace-keeping operations under the United Nations’ command. It has given its contribution to the pre-deployment training of each Croatian contingent in NATO’s peace-keeping operations in Afghanistan and elsewhere. It is also actively involved in pre-deployment training for operations under the European Union’s helm.” Colonel Miloš emphasized that the planned restructuring of the Croatian Armed Forces did not ignore the Centre; rather, it gave it an active role in the upcoming period. At the same time, the Centre planned advances in several key areas. These included the Survival, Evasion/Escape, Resistance, Extraction (S.E.R.E.) programme, which the Centre plans on expanding to other NATO member countries.

During the ceremony, meritorious employees of the Centre received awards and commendations for their above-average results in their service. Colonel Miloš recalled the important role that former and current employees of the Centre have played: “There is no doubt that generations of NCOs and officers who passed through this Centre, headed by their commanders, have left their mark, along with the current employees. Their selfless work is responsible for the reputation that the Centre has today.”