Back to homepage »
Share:
The Chief of the General Staff of the Croatian Armed Forces, General Drago Lovrić expressed satisfaction over the Combat Aircraft Squadron rounded out and emphasised the important role of the Croatian Air Force and Air Defence in control and protection of the Croatian (and by […] 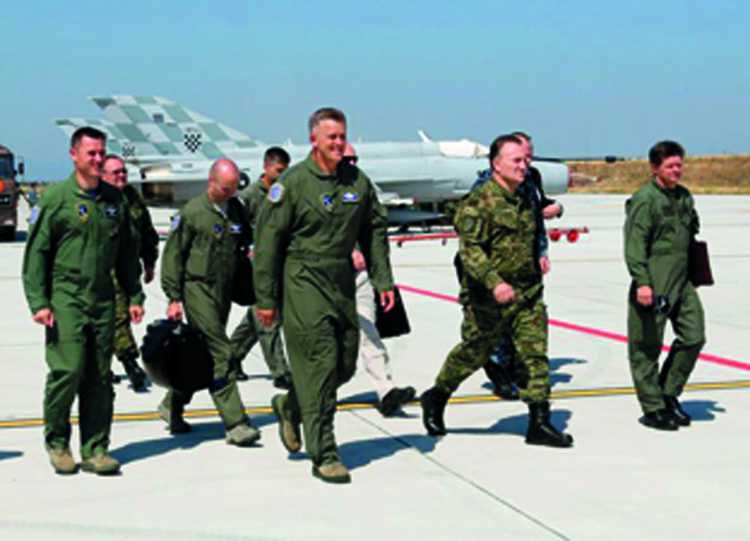 The Chief of the General Staff of the Croatian Armed Forces, General Drago Lovrić expressed satisfaction over the Combat Aircraft Squadron rounded out and emphasised the important role of the Croatian Air Force and Air Defence in control and protection of the Croatian (and by extension NATO) air space.
The 91st Croatian Air Force and Air Defence Base in the “Pukovnik Marko Živković“ Barracks at Pleso hosted the presentation of its Fighter Aircaft Squadron on 22 July 2015. The presentation was attended by the Chief of the General Staff, General Drago Lovrić, by the NATO AIRCOM USAFE Commander, General Frank Gorenc, the Croatian Air Force and Air Defence Commander, Major General Dražen Ščuri and other senior military officials.
On 16 July 2015 the 12th MiG-21 of the Squadron completed the last tests and flight trials, which proved its airworthiness. The MiGs uprade and overhaul have been completed, their life span  extended and the Squadron rounded out.
“The Croatian Air Force and Air Defence may be a small unit but it is highly efficient. We now have overhauled and mission-capable MiGs-21 and the radar systems. The Croatian air forces are engaged on a 24-hour basis, assisting the civilian institutions with fire fighting, emergency medical transportation and the search-and-rescue operations“ , said General Lovrić.
General Lovrić expressed the Armed Forces’ approval of the overhaul. “The  Armed Forces insisted on receiving each aircraft fully operational and airworthy. The Squadron is now complete and ensures full combat readiness as an essential requirement“.
General Frank Gorenc expressed satisfaction over the visit to the Croatian Armed Forces and the Air Force, as well as over the co-operation with the Croatian colleagues. An airman himself, he then visited one of the MiG-21 aircraft’s cockpit.  Lieutenant Colonel Stanko Hrženjak,  a MiG 21 pilot, stated that the pilots approved of the overhauled aircraft condition and informed that two new pilots were undergoing the training to fly the aircraft.
The Squadron presentation featured a demonstration exercise of Air Policing in real conditions and  in compliance with the NATO procedures. The Exercise scenario featured NATO air surveillance service alerting the Croatian Air Force’s air guard pair on duty of an unauthorised entry of an aircraft into the Croatian air space (the Croatian PC-9M). Immediately upon the notice the MiGs took off to intercept the aircraft and forced it to land. The procedures within the integrated scenario were implemented by the pilots of the air guard pair on duty , and the Croatian Air Force and Air Defence forces engaged in the exercise were assigned to the Combined Air Operations Centre from Torrejón, Spain.
The Exercise was followed by a flypast by three MiGs-21 practicing flying in column for the Military Parade of 4 August in Zagreb.
In late 2012 the Republic of Croatia made a decision to retain the national capability of the air force control. Consenquently, and also considering the restricted funds available, the Fighter Aircraft Squadron the existing MiG 21 fleet was to be overhauled.
In July 2013 the Croatian Ministry of Defence signed a 133-mil kuna (cca 17.523,788 EUR) worth contract with Ukrspecexport  on acquisition and overhaul of 12 MiG fighter aircraft (seven aircraft of the Croatian Air Force and five aircraft acquired from Ukraine). The contract stipulates the 24-month guarantee following the delivery of the aircraft successfully tested and handed over to the Croatian Air Force and Air Defence.

“Croatia is a small and strong country, with significant capacities and capabilities; a NATO nation and a reliable partner. Croatian pilots have distinguished themselves in peace missions training event and we are highly satisfied with Croatia’s engagement“ said General Gorenc, Commander NATO AIRCOM USAFE Commander.