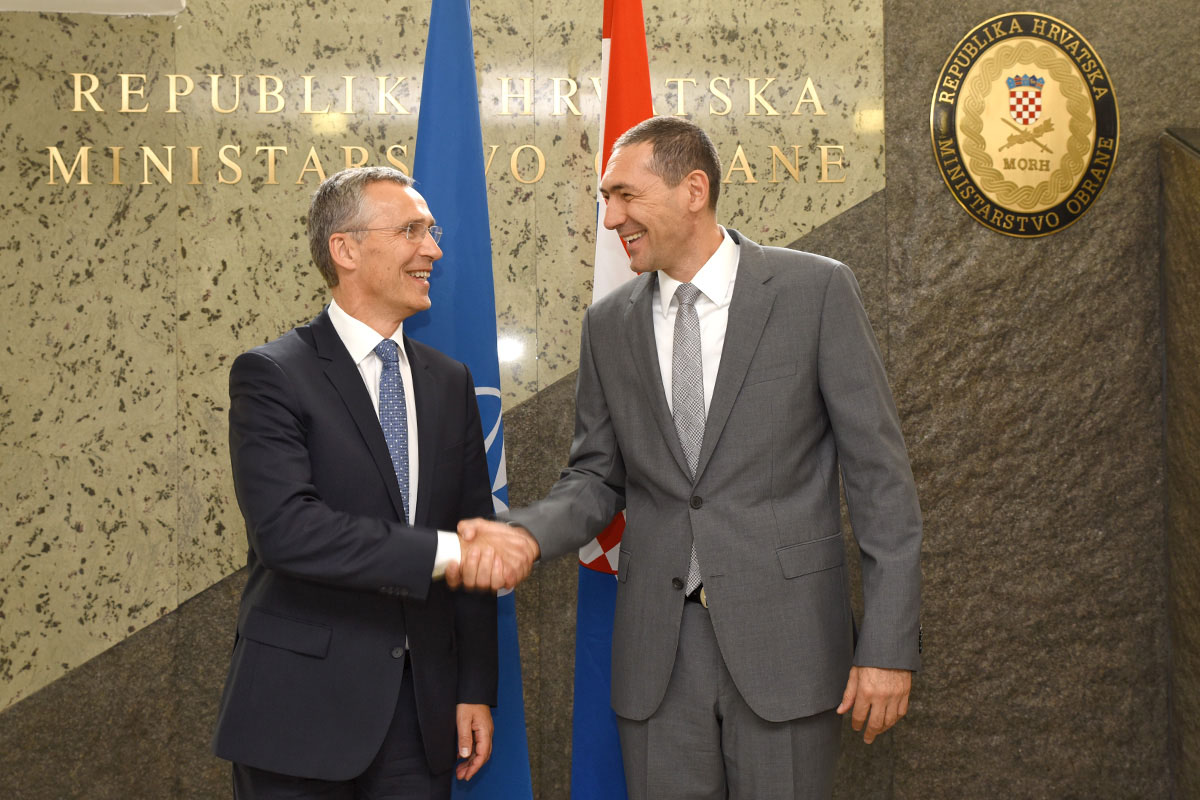 The Croatian Defence Minister, Ante Kotromanović on 9 July 2015 held a meeting with NATO Secretary General, Jens Stoltenberg during his official visit to the Republic of Croatia.
The Defence Minister and the Secretary General discussed the security situation along the Alliance’s borders, the current topics and the Alliance’s short and long-term adaptation to the security challenges, as well as the implementation of the conclusions from the Wales Summit.
Minister Kotromanović  expressed satisfaction over hosting NATO Secretary General in Croatia at mid-point between two summits (the Wales Summit and the 2016 Summit to be held in Warsaw).
“I am taking this opportunity to express appreciation to you, Your Excellency,  for your personal contribution and the new energy displayed in managing the Alliance. Croatia’s membership in NATO is the cornerstone of our defence and security, hence the importance attached to our NATO-related activities“,  stated the Minister.
The Minister briefed the Secretary General on the implementation of the defence investment pledge, a commitment taken by NATO members at the Wales Summit. “The defence investment pledge is a major commitment from the Wales Summit, underlying other adaptation measures. The Republic of Croatia has decided to halt the defence budget decline, and the decision is now being implemented; Our intention is to ensure the defence budget follows the growth of the GDP.  The focus will remain on the management of available resources, with the emphasis on increased allocations for equipping, modernisation and upgrade of living conditions of the members of the Armed Forces.
And the most important – we will maintain and further develop all capabilities of the Croatian Air Force and Air Defence, the Navy and the Army“, stated the Minister.
The Minister pledged the support by the Republic of Croatia to NATO’s enlargement, consistently with the Open Door Policy.
NATO Secretary General  Jens Stoltenberg welcomed the news on halted defence budget decline, as well as the investments into equipment and modernisation of the Croatian Armed Forces. Discussing the current security situation in southeast Europe, Secretary General praised the progress achieved by aspirant countries, particularly Montenegro, which expects NATO’s decision on invitation for membership by the end of the current year.
“NATO has to communicate its presence to the candidate countries through the instruments of the Defence and Related Security Capacity Building Initiative and continued military training and exercises programmes“, concluded Secretary General
NATO Secretary General held talks with the Croatian Prime Minister, Zoran Milanović and the Speaker of the Croatian Parliament, Josip Leko, and delivered a keynote speech at the annual diplomatic “Croatia Forum“ titled “New Development Policy – Towards Partnership and a Common Vision”, held in Dubrovnik  9-11 July, where he met with the President of the Republic, Kolinda Grabar-Kitarović and the First Deputy Prime Minister and the Minister of Foreign and European Affairs, Vesna Pusić..