Back to homepage »
Share:
Albeit among the newest members of NATO (the strongest military alliance in the history), the Republic of Croatia has done much to justify the membership and the trust. The membership has enabled the new and “commited Ally“ (as praised by NATO Secretary General  Jens Stoltenberg) […]

Albeit among the newest members of NATO (the strongest military alliance in the history), the Republic of Croatia has done much to justify the membership and the trust. The membership has enabled the new and “commited Ally“ (as praised by NATO Secretary General  Jens Stoltenberg) to contribute more actively to the collective security of the member nations and to the global peace.

The Republic of Croatia became a full  NATO member on 1 2009, with the deposition of the national ratification document of the North Atlantic Treaty in the State Department in Washington by the then Ambassador of the Republic of Croatia to the United States Kolinda Grabar-Kitarović . The membership has enabled the new “commited Ally“ (as praised by NATO Secretary General  Jens Stoltenberg) to contribute more actively to the collective security of the member nations and to the global peace. This cross-cut of the seven years in NATO  highlights the most important moments.

Croatia was presented as a new NATO member symbollically at the summit held in Strassbourg and  Kehl  4 April 2009. Three days later the Croatian flag was hoisted to the Croatian anthem in front of NATO Hq in Brussels, and only a few hours later NATO flag was hoisted in front of the Ministry of Defence in Zagreb. The flag ceremonies  formally marked the accession of the Republic of Croatia to NATO as full member. A lengthy  process encompassing the activities within the Partnership for Peace as a practical bilateral co-operation programme between NATO and the partner countries, and seven cycles of the Membership Action Plan, a programme of assistance and practical support tailored to the specific needs of the candidate country.

The swiftest Integration to NATO

Having acceded NATO formally, Croatia still had to complete the integration process which demanded further considerable efforts and adjustments in all domains of the defence system. The accession process executed by Croatia and its Armed Forces was the swiftest ever, as confirmed on 25 October 2012, when the Chief of the General Staff of the Croatian Armed Forces, General Drago Lovrić and Deputy Supreme Commander for Transformation (DSACT), General Mieczyslaw Bieniek(POL) formally signed the Declaration on the Completed Integration of the Croatian Armed Forces to NATO. 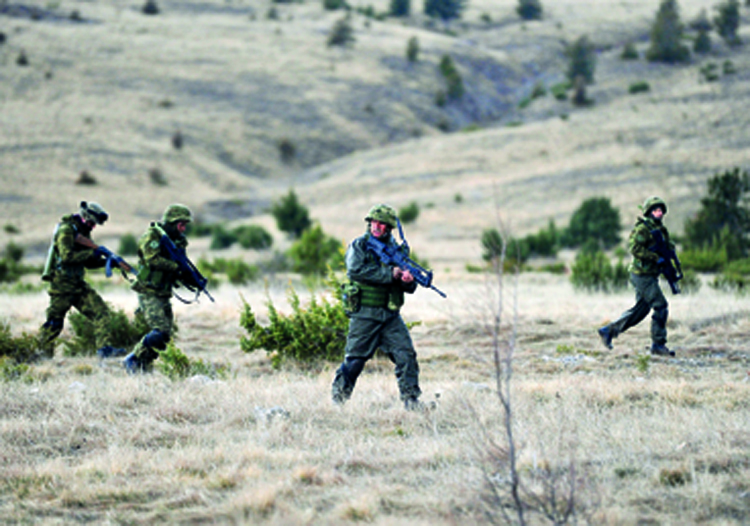 Having acceded NATO the Croatian Armed Forces also joined  NATO Response Force (NRF) – a high-readiness,  superbly equipped and readily deployable forces composed of land, naval and special units. Croatia’s initial participation was confined to small-sized forces declared in the Response Force Pool“. Since 2013 the Croatian forces have been declared for NATO Immediate Response Forces (IRF)- a high-level readiness composed of mechanised infantry company of the Guards Brigade. The forces  declared for a specified period undergo strict national and NATO testing, which is thefore preceded  by intensive training, exercises and evaluation activities at the national and international levels.

Croatia has continuously proved the commitment to buiding, maintaining and enhancing NATO defence capabilities through such the projects of Smart Defence), the Connected Forces Initiative, the Framework Nation Concept and the like.i dr. The most visible project conducted in Croatia associated with Smart Defence, whereby the participating nations pool their resources and capacities to reduce training costs. In mid 2012 a joint training of the Croatian and the Czech air advisory teams as pre-deployment training and preparation of the members of the respective air forces mentoring the helicopter squadrons of the Afghanistan Air Force. The project was subsequently joined by the members of the Hungarian and the Slovak Air Force, and the 12th cycle was completed in early 2016.

The Croatian Armed Forces have contributed to the operation in Afghanistan since 2003, still in the partner nation status. The moment of the accession to NATO coincided with the deployment of the 13th Contingent to ISAF. Throughout the engagement in ISAF (24 HRVCON) the members of the Croatian Armed Forces  gave respectable contribution to the stabilisation of the situation in Afghanistan, particularly in training and mentoring the members of the ANSF. The Croatian Armed Forces performed successfully during the transition from ISAF to the Resolute Support mission from 31 December 2014 to 1 January 2015; the 24th HRVCON was converted to  1st HRVCON RS – the Train, Advise and  Assist mission.  The 4th HRVCON has been deployed to Afghanistan, since February 2016.

The Croatian Armed Forces joined the NATO-led Operation  KFOR in Kosovo soon after the accession to NATO in July 2009. The Croatian contingents have been composed mostly of the members of the Croatian Air Force and Air Defence, assigned with airlift of the KFOR forces, cargo and VIPs (operating the Mi-171 Sh helicopters).  The contingents are rotated on a 4-month basis, and are stationed in the Bondsteel Camp at Ferizaj/Uroševac,  and are directly subordinated to the KFOR Commander. Presently the 20th HRVCON is engaged in Kosovo  (since November  2015).

In their first seven years in NATO the Croatian Armed Forces conducted a series of high-intensity exercises. A significant part of the exercises was accounted by the preparation of the forces declared for the participation in NATO-led missions and operations and the forces  declared for NRF or with the  Force Goals.  The most important exercise abroad and the largest for the Croatian Armed Forces was the recent  Trident Juncture 2015 (3 October – 6 November 2015), the largest NATO exercise in the past 15 years, which engaged a total of 36,000 participants, among whom the members of the Croatian Navy, operating two landing crafts-minelayers sealifting the particiating forces to Spain, 14 members assigned to  NATO  Deployable Communications Module (DCM) and the 1st Platoon of the 1st Company of the Mechanised Battalion (“Gromovi“).