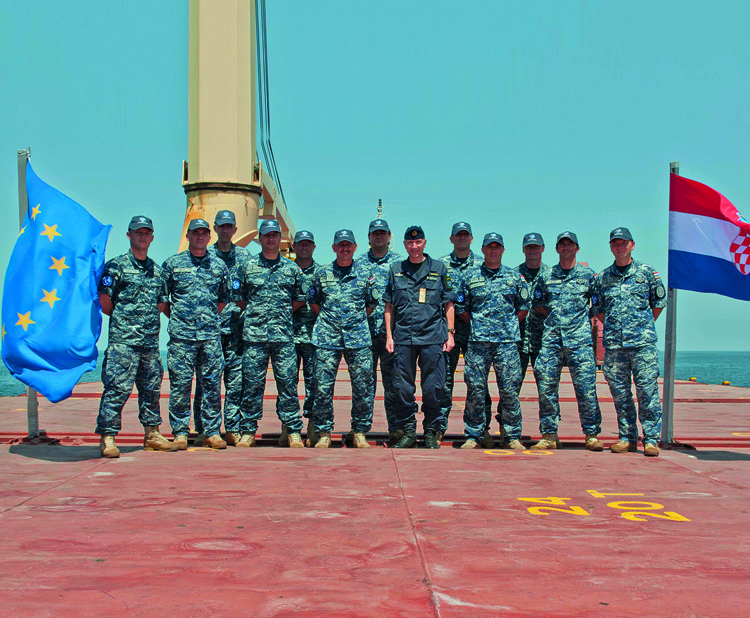 The twelve members of the first Croatian Autonomous Vessel Protection Detachment  AVPD) last December embarked on the MSM Douro merchant ship moored in Djibouti, taking part in EU NAVFOR SOMALIA – OPERATION ATALANTA, as first-time Croatian participants. They were assigned with protecting the vessel transporting and providing the supplies and humanitarian assistance to the local population within the UN’s World Food Programme – WFP).
“We only stepped on solid ground three times since we took on the duty – in Dar-es-Salaam, Tanzania, in  Mombasa, Kenya and in Djibouti, it was less then 12 hours.“, says Lieutenant (N) Nenad Kontri, the first Croatian AVPD Team Commander, Sergeant first Class Tihomir Roso, member of the 2nd Security Team and Sergeant Major of the Army Nikola Belas the commander of the 2nd Security Team.
Having previously reported on the Team’s preparations for the mission, we now welcomed them as well to hear of their impressions and experiences as the first Croatian participants in the Operation ATALANTA.
The Team was composed of superbly prepared, trained professional soldiers, proven in toughest trainings and special forces assignments and boasting the experience from the Homeland War and from international missions. However, they saw the participation in ATALANTA no less demanding. “It takes psychological stamina“, says Commander Kontri and goes on to describe everyday operating conditions throughout the 111 days spent aboard the ship – the temperatures ranging from 35-45 °C, average humidity 90%; in the monsoon season the sea is 4-5, and wind 25-35 knots; the working and living regime consisted in 3,30-h shift work, without days off and free time. They were living and storing their equipment in restrained spaces in containers, with 3 members sharing a 6 m2. Moreover, the movement radius on the ship at all three levels was 15 m; moving from the container to the “dormitory“ at all three levels – from the container to the bed; from the relay position to the dining space – no further“, says SMA Belas. In addition to the ship-like living conditions, they were found in a bizzare situation shortly upon embarking, when the ship captain expelled the ship cook for disobedience, and as the shipping company was not able to recruit a new one in the short time, it was the Croatian team that took on the cooking part. “We just added meal preparation to our normal tasks and shifts“, said SFC Roso.
The MSM Douro’s duty was to embark the ports to load or unload the cargo. The work was carried out around the clock, without using the machines; the 100m2 deck was occupied by 100 operators swarming and carrying the items, potentially the people with covert goals and intentions  that had to be surveilled. In Somali ports, in compliance with the rules of engagement, for reasons of security and inconspicuousness the AVPD team members wore civilian attire and carried only small arms, well-hidden.
“ It takes a lot of concentration to keep it all under control, furthermore, you are only armed with a pistol for self-defence. The rest of the armament is kept hidden aside. Of course, the situations of the kind bear a higher alert level too, and we have procedures in place to apply as the situation requires and are 100% ready“.
The AVPD members are stationed aboard the merchant shipts. Military ships do not enter Somali ports, and the AVPD teams are tasked with collecting the required data and photos and with sending Port reports to the respective command following the port visits. The Croatian officers emphasised noticing illegal crossings and human trafficking instances. Lieutenant Kontri sums it up: „We have done a great job, and completed some newly assigned tasks. In recognition to their commitment they received several commendations and, on top of it, were presented with the EU Common Security and Defence Policy Medal, by the EU NAVFOR Commander, in March.
The main duty of the AVPD Team was to deter and protect the ship from assaults and hijacks. Equally important for the success of the mission was the teams’ ability of communication, peaceful settlement of problems, as well as their intuition and resourcefulness.
Last but not least, they had to build harmonious relations with the ship crew, characterised by mutual trust and assistance as a precondition for the normal life aboard the ship, meaning that we did not wait to be asked to help with the cargo load or with repairs aboard. There was an imperative of striking good communication with the locals too. Lieutenant Kontri gives a deeper insight: you have be attentive to the communication with the with the people you meet there, without imposing yourself or standing out, earn their trust without jeopardising the Team’s security. That’s why we grew our beards, wore civilian clothes, approached them in a friendly manner and avoided any unnecessary tension. We were there to help them. Our medical team administered aid to the locals on two occasions. We shared our food with them – chocolates, fruit, water. A bottle of cooled water to a man who carries sacks at 45° C  outside – that’s a gesture he won’t forget, and he spreads the good word around on kind Croats reaching out to them and helping them.
“I would like to extend appreciation to all lecturers and instructors who gave their contribution in the pre-deployment training, as well as to the Croatian Navy for the trust invested in us for this important mission for the Croatian Armed Forces“, said Lieutenant Kontri. „The experience and the knowledge gained in ATALANTA will be applied to prepare the next Croatian AVPD Team“. 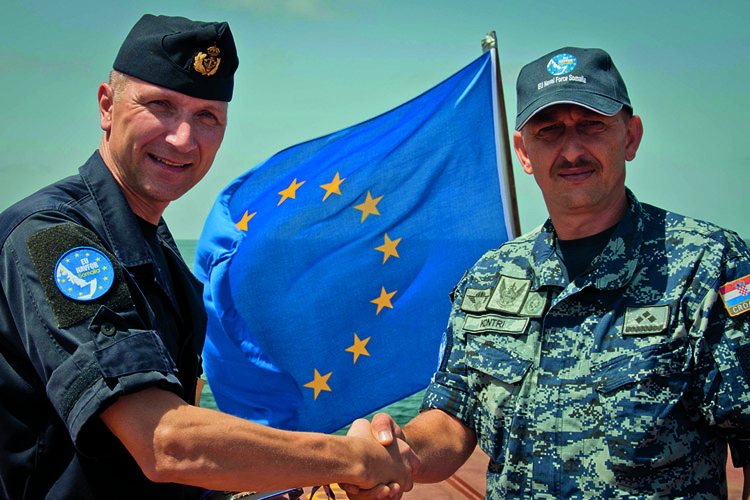 The official EU NAVAL FORCE SOMALIA (http://eunavfor.eu/) quoted the achievement:
“On Wednesday 4 March 2015 the EU Naval Force Croatian maritime team, embarked on World Food Programme (WFP) vessel, MSM Douro, to protect it from pirate attack as it sailed along the Somali coast, has been awarded the Operation Atalanta medal for their outstanding efforts. The Croatian maritime team, which is known as an Autonomous Vessel Protection Detachment, or AVPD, has served with Operation Atalanta since December 2014.  As a result they were eligible for the EU Common Security and Defence Policy Medal, which was presented by the Force Commander of EU Naval Force, Rear Admiral Haggren.“