Back to homepage »
Share:
Having berthed in the Sicilian port of Catania on 30 October 2015 the Croatian Navy’s Training Ship “Andrija Mohorovičić completed its mission in the Operation Triton 15 led by FRONTEX. The Commander of the Croatian Contingent was Lieutenant Commander Vlado Zoko, while the Ship itself […]

Having berthed in the Sicilian port of Catania on 30 October 2015 the Croatian Navy’s Training Ship “Andrija Mohorovičić completed its mission in the Operation Triton 15 led by FRONTEX. The Commander of the Croatian Contingent was Lieutenant Commander Vlado Zoko, while the Ship itself was Commanded by Lieutenant Stjepan Giljević. The crew of 54 (49 members of the Croatian Armed Forces and five members of the Border Police) rescued more than 2500 migrants.

A few days later the Ship returned to the home port in Split. The homecoming ceremony was attended by the crew’s families members, the Defence Minister Ante Kotromanović, the Director of th General Staff of the Croatian Armed Forces, Rear Admiral  Robert Hranjas as Envoy of the Chief of the General Staff, the Croatian Navy Commander, Commodore Predrag Stipanović, other senior officials of the Croatian Armed Forces as well as by the Assistant Minister of the Interior, Vladimir Nemec.

Welcoming the crew back the Defence Minister Ante Kotromanović expressed the satisfaction over the remarkable service in the Operation demonstrating Croatia as a well-organised country capable of managing the risks in the national territory and in the Mediterranean. The Croatian Armed Forces are manned by highly competent officers who can carry out any task and who prove military efficiency combined with enviable humanity, the Navy personnel here and the Army personnel handling the migrants along the land routes.

“I’ve heard the commendations from the Operation’s leaders. The participation in the Operation Triton is a valuable experience for the Croatian Navy and the Armed Forces and a major incentive to increase the investment into Navy’s capabilities“, said Minister Kotromanović. 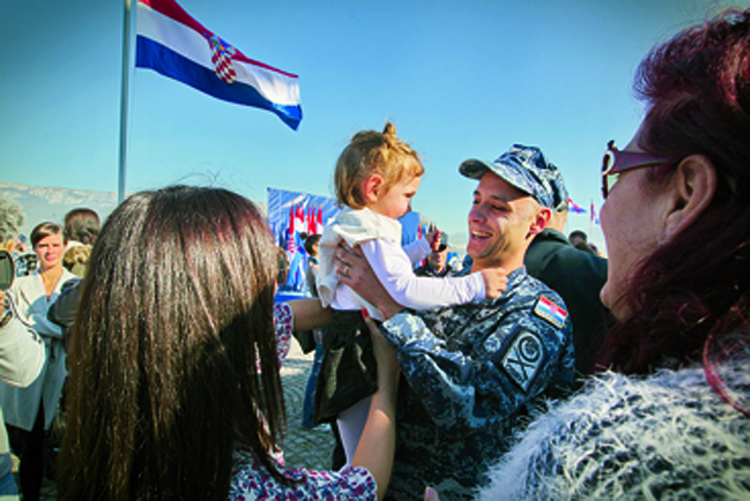 The Commander of the Croatian Navy, Commodore Predrag Stipanović said that during the three-month deployment a large number of people (among whom elderly people and children) were rescued, testifying to the professionalism and the ability of the mission conduct.

“I called on the crew on their departure to act as professionals but foremostly as humans, the last ray of hope to the migrants and to assist them in the best possible way. We may be soldiers, Navy officers and professionals but in the situations of the kind it was humanity that counted“, said Cdre Stipanović.

Asked to describe the difficult situations during the deployment the Commander of the 1st Croatian Contingent to Operation Triton 2015,  Lieutenant Commander recalled the episode of rescuing over 300 migrants, when one family got separated and the crew had aboard two children without the parents to look after; however professional we are human beings foremostly and we were shaken with the experience“, said Lt.Cdr. Zoko.

The Ship patrolled along the outer border of the zone 200 nm off the coast of Sicily in the Ionian Sea, rescuing the migrants arriving from SE Libia and the Middle East.

Upon detection of the position of the vessels with the migrants signalled from the Operation Headquarters the Ship headed towards the spot and launched rescue operation. The rescued mirants were provided care aboard the Ship and transported to the port of debarcation, where they were taken care of by the respective services in charge.