Back to homepage »
Share:
The 22nd anniversary of the military and police operation “Lightning“ (Bljesak), liberating thereto occupied territory in western Slavonia, was marked formally at Okučani on 1 May 2017. The ceremony was attended by the President of the Republic  as Supreme Commander of the Croatian Armed […]

The 22nd anniversary of the military and police operation “Lightning“ (Bljesak), liberating thereto occupied territory in western Slavonia, was marked formally at Okučani on 1 May 2017.

The Croatian Deputy Prime Minister and Defence Minister Damir Krstičević said that with pride and dignity we remember the military and police action of Bljesak and the defenders who made this great victory. “We recall all our fellow combatants sacrifying their lives and health into this magnificient victory of the Croatian Army. The Operation “Lightning“ demonstrated the Croatian strength and resoluteness  and signalled the operation to follow – the “Storm“. “We have to recall the power of togetherness from the Homeland War as an indispensable condition for any victory, success and dignity. We have the right to be proud of this day and the importance of the Operation “Lightning“ and the Homeland War – they are the foundation of the Republic of Croatia“. The marking the anniversary of the Operation featured the performance of  of ceremonial procedures by the Honorary Battalion, the demonstration exercise by the Military Police Regiment (“Military Working Dogs“) and the exercise “Close combat“ by the Special Forces Command. 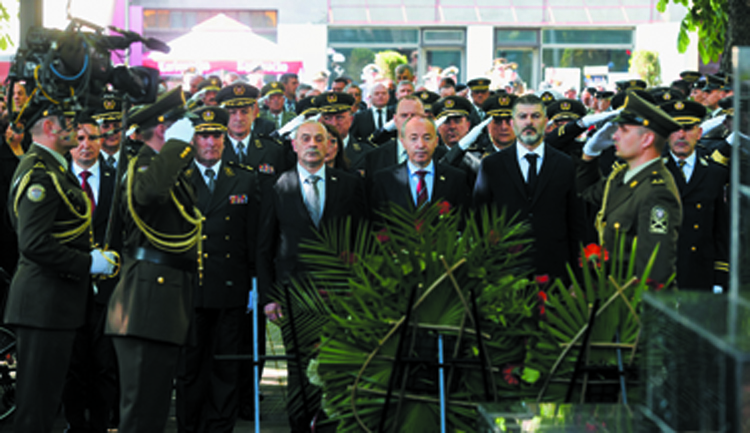 The folk ensembles festival entitled “Obnovimo baštinu“ (Heritage Revival) was held on 29, while on 1 May the Croatian Armed Forces Orchestra played a reveille in the streets at Okučani. The static display of the weapons, combat and non-combat assets and equipment used by the Croatian Armed Forces, a presentation of the Project “Cadet“, the military study programmes administered by the Croatian Defence Academy “Dr. Franjo Tuđman“ and the voluntary military service were organised on the occasion. The marking of the anniversary also included sport tournament for the Croatian defenders (organised by the Association of the Veterans of the Homeland War of the Brod-Posavina County);“Hrvatski sokol“ marathon race from Nova Kapela to Novska and Okučani and the eponymous 5th Motorcycle Rally “Lightning“.

The Croatian Army on 1 May 1995 launched the military and police operation“Lightning“ in order to liberate the occupied territory in western Slavonia. The Operation was approved by the President of the Republic of Croatia  Franjo Tuđman, pursuant to the order from the Chief of the General Staff of the Croatian Army, General Janko Bobetko. The units of the Military Districts Bjelovar, Osijek and Zagreb and the special units of the Ministry of the Interior successfully executed the task. The Operation engaged members of the 1st, the 3rd and the 5th Guards Brigades, the armoured group of the 2nd Guards Brigade, the 80th and the 81st Guards Battalion the 1st Croatian Guards Division.the  52nd, the 121st and 125th Home Guard Regiments, the 104th, 105th and 123rd Brigade of the Croatian Army, the members of the 265th Reconnaissance and Diversion Company. Artillery and missile and air defence support was provided by the units of the 123rd and 127th Brigade of the Croatian Army,  and of the 15th and 16th Anti-armour Artillery and Missile Brigade, the 18th Artillery Battalion and the 201st and 202nd Artillery-missile Brigade of the Air Defence.  They were supported by the Electronic Warfare Platoon and the Unmanned Aerial Vehicles Platoon, the units of the 34th Engineer Battalion, the 255th Signal Battalion and 312nd Logistic Base. The Croatian Air Force and Air Defence also had a very important role; during one of the sorties in Mig 21 was fatal for the Commander of the 1st Fighter Squadron of the Croatian Air Force and Air Defence, Lt. Col. Rudolf  Perešin.