Back to homepage »
Share:
The Victory Day, the Homeland Gratitude Day and the Croatian Defenders Day as well as the 21st Anniversary of the Military and Police Operation “Storm” were marked formally in Knin on 5th August 2016. The town of Knin, on whose fortress the Croatian flag was […]

The Victory Day, the Homeland Gratitude Day and the Croatian Defenders Day as well as the 21st Anniversary of the Military and Police Operation “Storm” were marked formally in Knin on 5th August 2016. The town of Knin, on whose fortress the Croatian flag was hoisted to mark the victorious advance of the Croatian Army in the largest defensive operation thereto, was host to senior civilian and military officials, namely the President of the Republic, Kolinda Grabar-Kitarović, the Prime Minister Tihomir Orešković, the Speaker of the Croatian Parliament Željko Reiner, the Defence Minister Josip Buljević, the Minister of the Interior Vlaho Orepić, the Minister of Veterans Affairs Tomo Medved, the Chief of the General Staff of the Croatian Armed Forces, General Mirko Šundov, the members of the Armed Forces as well as the participants of the Operation “Storm”.

The church bells in the Knin Fortress commemorated the moment of the entry of the Croatian forces in Knin during the Operation “Storm“, followed by a flypast of the MiGs 21, the firing of volley salute and the hoisting of the state flag. The commemorative address was complemented with a roll of honour of the 240 killed, missing and the members of the Croatian Army who deceased following the wounding or detention in prison camps.

The eponymic aerobatic display group “Wings of Storm“, which marked its 11th anniversary on the same day, performed a honorary flying sequence.

The senior invitees later attended the paying of respects to all defenders fallen in the Operation “Storm” and the wreath was laid on behalf of the President of the Republic of Croatia, the Speaker of the Parliament and the Prime Minister, of the Ministry of Defence and of the Ministry of the Interior, of the Ministry of the Veterans Affairs, of the Directorate of the Police, of the Mayors of Knin, Zagreb and Vukovar and of the representatives of the Croatian defenders in the central square of Knin ( the Ante Starčevića Square). The prayer for the fallen defenders the civilian victims of the Homeland War was recited by the Military Bishop of Croatia, Mons. Jure Bogdan, and 21 doves were released from the Square. 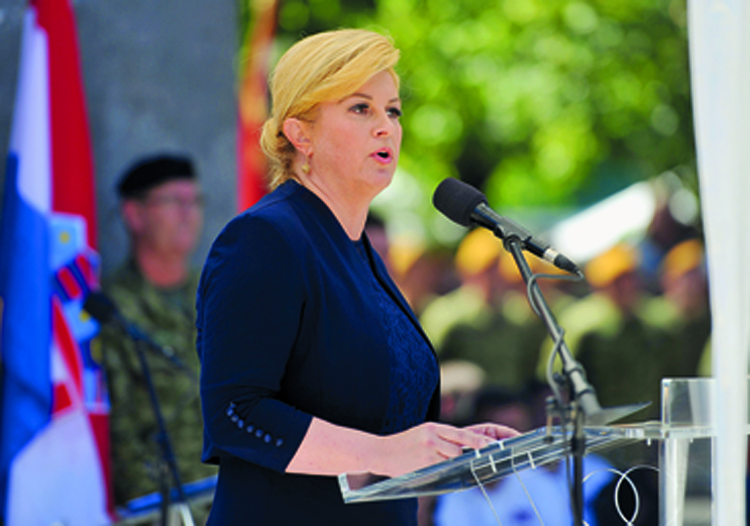 In her honorary address in the central Knin square President Kolinda Grabar-Kitarovic extended deep gratitude to all participants of the Operation “Storm”, particularly the fallen heroes. The President highlighted that the modern Croatia was established as a result of the will of its people and its citizens and through the magnificent victories of the Croatian defenders, culminating in the Operation “Storm”. The entire Croatian people lived and shared the joy of those historic days. 5th of August is a commemoration of the freedom and peace”. The President also emphasised that the Operation was politically justified, highly ethical and brilliantly conducted victorious campaign, showing that the determined leadership, a clear goal and patriotism, supported by a well-trained army, were decisive for the victory.

Retired Lieutenant Colonel Ivica Glavota delivered an address on behalf of the Croatian defenders, stating that  the Operation Storm was the brightest jewel of the Homeland War and that his generation was a privileged one, having the opportunity to win the freedom for Croatia that had been cherished for centuries.

The officials and invitees attended the mass served for the Homeland in the church of Our Lady of the Great Croatian Baptismal Vow by the retired Bishop of Šibenik Msgr. Ante Ivas, concelebrated by the Military Ordinary Msgr. Jura Bogdan and Msgr. Tomislav Rogić, the Bishop of Šibenik.

The ceremonial programme also included a concert titled “Victory for Heroes” of the Croatian Navy Orchestra and the “Sv. Juraj”, Vocal Ensemble, of the Tambura Band of the Croatian National Television and other performers.

This year’s commemoration was associated with the renovation of the Vukovar Water Tower, for which purpose a call-center was opened in Knin in the evening hours to raise some of the funds needed.