Back to homepage »
Share:
The 20th Anniversary of the Police and Military Operation “Lightning“ was commemorated in Okučani on  1 May 2015. The ceremony was attended by the President of the Republic and the Supreme Commander of the Croatian Armed Forces, Kolinda Grabar Kitarović, the Prime Minister, Zoran Milanović, […] 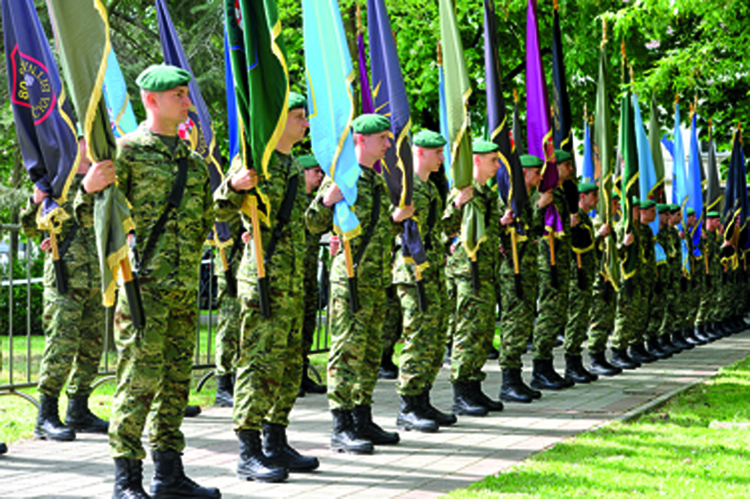 The 20th Anniversary of the Police and Military Operation “Lightning“ was commemorated in Okučani on  1 May 2015. The ceremony was attended by the President of the Republic and the Supreme Commander of the Croatian Armed Forces, Kolinda Grabar Kitarović, the Prime Minister, Zoran Milanović, the Speaker of the Croatian Parliament, Josip Leko, the Deputy Defence Minister, Višnja Tafra, the Chief of the General Staff of the Croatian Armed Forces, General Drago Lovrić, General Police Director, Vlado Dominić and other senior military and civilian officials, as well defenders and the family members of the fallen defenders.
The ceremony commenced with a parade of the flags of the units carrying out the Operation, followed by the commemorative service featuring the performance by the “Sveti Juraj“  Ensemble of the Croatian Navy, the reading out of the roll of honour for the fallen and missing Croatian defenders and the observed minute of silence for them. The delegations laid wreaths at the Central Cross in the Croatian War Veterans Memorial Park at the Okučani graveyard.
The President of the Republic as Supreme Commander expressed pride and gratitude to all Croatian defenders and in particular to those fallen in the Operation Lightning, as well as to the disabled defenders, the families of the fallen members and of the civilian victims of the Homeland War. The President called on to togetherness, which led the Croatian Army to victory in the operations  “Lightning“ and “Storm“, liberating the country, that has eventually become both NATO and the EU member.
The Chairman of the Croatian Parliament, Josip Leko stressed that 20 years on the Operation Lightning, the liberating campaign for western Slavonia, gains importance. “The commemoration of the decisive operations liberating operations is focussed on peace buildng, on democratic values, human rights and freedoms“.
Deputy Defence Ministry, Višnja Tafra said the anniversary was the occasion to commemorate the fallen defenders with dignity, and recalled the heroic pilot Rudolf Perešin, whose aircraft was shot down in the Operation.  Mrs Tafra extended deep gratitude to all the participants.
The Chief of the General Staff, General Drago Lovrić said that the Operation launched 20 years earlier demonstrated the strength of the Croatian Army. “Croatian soldiers are victorious soldiers, who will overcome any obstacles to defend the national interests“.
The Holy Mass for the fallen defenders and civilian victims of the Homeland War was served by the Bishop of Požega, msgr Antun Škvorčević , who in his homily honoured the patriotic and daring citizens of Croatia.
Lieutenant Colonel Mile Valentić,  Deputy Commander of the Guards Mechanised Brigade of the Croatian Army and a participant of the Operation himself said he was proud to have taken part side by side with his fellow combatants. “We succeded in liberating the area within a short time period, were highly motivated and determined to liberate our homeland; it is a magnificient impression“.
The Croatian Air Force’s Aerobatic Group “Wings of Storm” performed a flying programme to honour the victory in the Operation. It was the first-time performance for four new members of the Group , in the tenth anniversary of its establishment.
The commemoration of the 20th anniversary of the Operation was concluded by the ceremonial programme by the Honorary Battalion of the Croatian Armed Forces; an exercise  demonstration by the Military Police Regiment with military working dogs and martial arts skills demonstration by the Special Forces Command.  The visitors were also able to see a Static Display of the weapons, and combat and non-combat assets and equipment used by the various units of the Croatian Armed Forces set for the occasion.