Back to homepage »
Share:
The town of Zadar on 20 January 2017 hosted the ceremonies marking the 24th anniversary of the Military and Police Operation “Maslenica“ – one of the first large liberating operations launched by then Croatian Army and the police and a turning point in the course […] 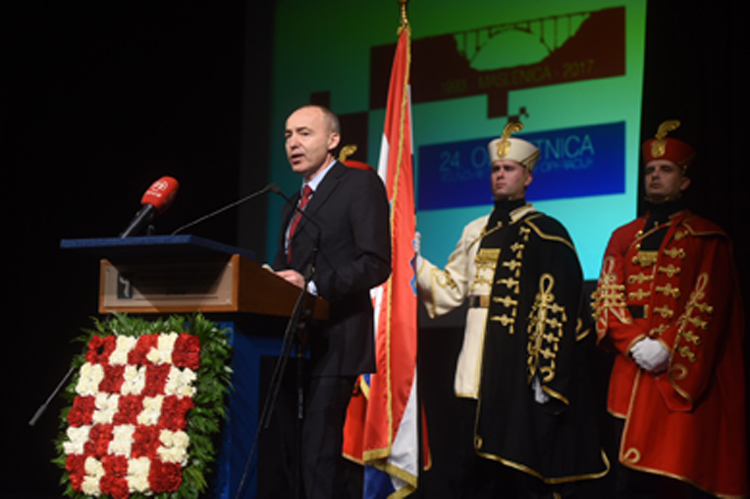 The town of Zadar on 20 January 2017 hosted the ceremonies marking the 24th anniversary of the Military and Police Operation “Maslenica“ – one of the first large liberating operations launched by then Croatian Army and the police and a turning point in the course of the Homeland War.
Wthin only 72 hours all three services of the Croatian Army liberated nearly 100 km2 of the thereto occupied Croatan territory, reconnecting and restoring the road communication between Dalmatia and the continental part of Croatia, and fufilled all main Operation objectives.
In the morning the streets of Zadar echoed with patriotic songs.
The delegation of the President of the Republic as the Supreme Commander of the Croatian Armed Forces and of the Prime Minister, headed by the Deputy Prime Minister and the Defence Minister Damir Krstičević paid respects to the fallen defenders and laid wreaths at the central cross at the City Cemetery . 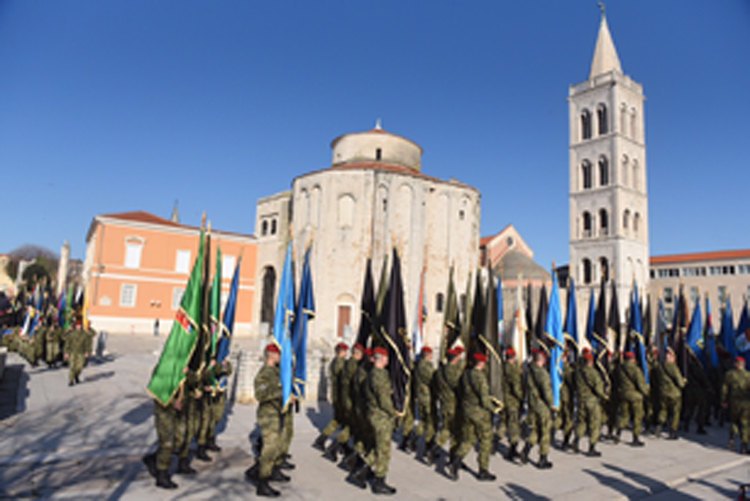 The delegation included the Croatian Minister of the Veterans’ Affairs Tomo Medved, the Special Advisor to the President for the Croatian Defenders Ante Deur, the Chief of the General Staff of the Croatian Armed Forces, General Mirko Šundov and the Police Director  Marko Srdarević.
Wreaths were laid by the family members of the fallen defenders, the Prefect of the Zadar County Stipe Zrilić, the Mayor of Zadar Božidar Kalmeta and the representatives of the associations of the Croatian defenders. A joint wreath was laid at the memorial spot of the 3rd Battalion (“Imotski sokolovi“) of the 4th Guards Brigade.
The marking was continued with the traditional march of the Operation participant units displaying the wartime unit flags through the historical centre of Zadar to the church of St. Simeon, where the mass was served for the fallen members.
At the formal ceremony in the Croatian National Theatre in Zadar the historian and the Director of the Croatian Memorial and Documentation Centre of the Homeland War Ante Nazor held a lecture on the military and political circumstances in which the Operation was conducted.
The Deputy Prime Minister and the Defence Minister Damir Krstičević (as Envoy of the Prime Minister) emphasised that the Operation Maslenica was a “turning point of the Homeland War for several reasons.  We demonstrated that the acquired level of organisation and equippedness of the Croatian Army enabled the undertaking of complex military operation and that the Croatian Army was capable of restoring the occupied territories by its own forces. We also  enforced the faith of all defenders and the entire people in its  victorious quality. The Operation “Maslenica“ was the major proof that  the Croatian Army had grown into a force capable of liberating Croatia“. The participants of the Homeland War were superb soldiers, which was decisive. The Minister underlined the importance of keeping the memory of the sacrifice of the fallen Croatian defenders, obliging us to cherish the values of the Homeland War, as the only way to further develop Croatia dreamed of by its defenders.

The Minister also addressed the current moment, and highlighted the importance of security and peace as preconditions of the economic and general prosperity. Hence the importance of drafting of the new strategic documents, foremostly the National Security Strategy, to enable efficient response to any threats. Minister  Krstičević concluded by stating: “ The Operation “Maslenica“ demonstrated to us and to the world the power of togetherness of the Croatian people and its military, the importance of the determination and honour as well as the victorious Croatian spirit“.
The Envoy of the President of the Republic Ante Deur said the days of the Operation Maslenica were a time of pride, grief and valour of the generation which realised the centuries-long Croatian aspirations. “Having witnessed to the time, we are obliged to convey the truth on the Homeland War and on the truth about the power of the victorious Croatian military“ said the Envoy. 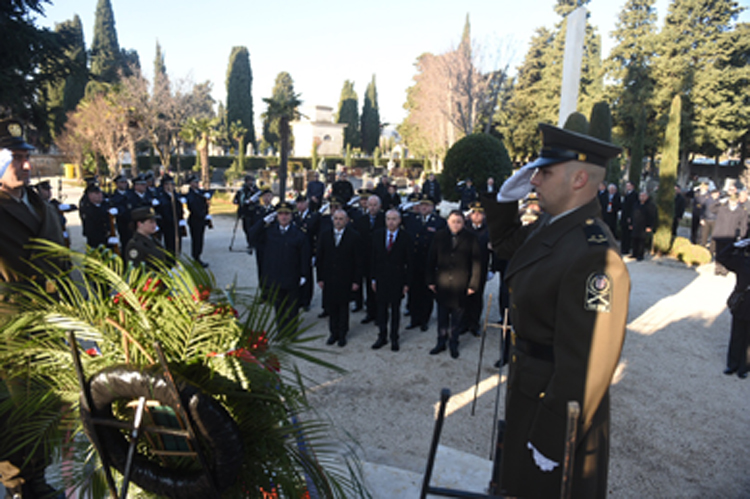 The Chief of the General Staff of the Croatian Armed Forces, General Mirko Šundov reminded that all three services of the then Croatian Army were engaged in the Operation, which was of decisive importance for the defence of Croatia from the aggression, as its members acquired the valuable experiences useful for the subsequent growth and organisation.
General Šundov emphasised that the sacrifice, the valour and the strength of the Croatian defenders  merit gratitude and must not fall into oblivion. The Operation Maslenica restored the pride, dignity and hope of the Croatian people that the occupied territory would soon be liberated. The sacred dates of the Homeland War should be kept in living memory  and merit the gratitude of the Croatian people.

The Prefect of the Zadar County  Stipe Zrilić said the Homeland War was the foundation of Croatia’s freedom, and it has to be communicated to a wider public and to the younger generations.

The marking of the Operation  “Maslenica“ will continue with the commemorative events and memorial sport tournaments in Kašić, Islam Latinski, Paljuv, Posedarje, Jasenice and Donji Karin in the next three days.