It was attended by the President of the Republic as Supreme Commander of the Croatian Armed Forces  Kolinda Grabar-Kitarović, the Deputy Prime Miister and Defence Minister  Damir Krstičević, the Minister of Veterans from the Homeland War Tomo Medved, the Chief of the General Staff of the Croatian Armed Forces, General Mirko Šundov, many senior civilian and military officials and a large audience.The President of the Republic and Supreme Commander of the Croatian Armed Forces  Kolinda Grabar-Kitarović congratulated the members on their day, expressing satisfaction over their achievements and capabilities, though there is always room for improvement. “The Croatian military liberated Croatia and have over the time shaped up into a peacetime force, capable of fulfilling any task assigned. The citizens of Croatia can be fully assured that the Croatian Armed Forces protect the Republic of Croatia“, said the President, recalling the early days and the first line up of the Croatian units at the “Zagreb“ Football Club’s stadium in Zagreb  in May  1991: “The progress made since the first line-up in 1991 is almost incredible. We still remember the scarse and unreliable equipment we had – one helicopter only. 26 years on Croatia is a full NATO member, fulfilling its commitments, among which the  increased defence budget. “Defence budget should be viewed as investment into security, the personnel and technical equipment indispensable to counter the risks and respond to any modern security threat“, said President Grabar-Kitarović. The Deputy Prime Minister and Defence Minister Damir Krstičević expressed satisfaction  with the presented capabilities and equipment and stated: “As soldier I have been most ambitious fulfilling my  mission of protecting safety and enhancing the Croatian Armed Forces, jointly with the CHief of the General Staff, the enlisted soldiers, NCOS and officers“ . 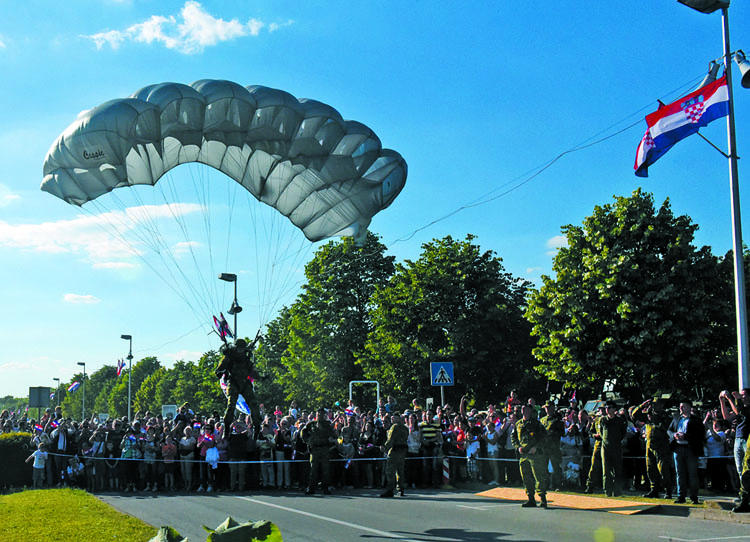 The formal programme kicked off with 26 symbolic honorary salutes fired from eight 76-mm guns by the Self-Standing Howitzer Battalion of the Artillery –Missile Regiment of the Croatian Army, recalling the  lives of many Croatians built into freedom of the country. They were followed by parachute jumps by five  members of the Special Forces Command from the Mi-171Sh helicopters of the Croatian Air Force and Air Defence. They  jumped from the helicopter at the altitude of 1200m, descending at the speed of 200-250 km/h  (depending on the weight and body posture). The first paratrooper opened the parachute at 750 m. The  peak moment was the drop of one of the best paratrooper of the Croatian Armed Forces in front of the VIP stand, who then handed the national flag of the Republic of Croatia to the President  and Supreme Commander of the Croatian Armed Forces Kolinda Grabar-Kitarović, which was accompanied by applause and ovations of the audience. The group composed of 13 members of the Honorary Battalion performed an eye-catching ceremonial  procedure combining honorary and drill elements. The sequence is both visual ( they are wearing the service honorary uniforms of the Croatian Army)  and acoustic, entailing the sounds  of the handling of the M59/66 semi-automatic rifles, adjusted for ceremonial performances. The members of the Special Forces Command conducted the exercise  “Combat search and rescue in the enemy area“, conducted according to a fictitious scenario (a pilot of the Croatian Air Force and Air Defence is missing from a previous action in an enemy area in a peninsula). The search-and-rescue task team was assigned with the extracting the pilot. The special forces members, elite soldiers, displayed some of their skills: repelling from the helicopter carrying the weapons and equipment, securing the landing area, locating, medical evacuation, extraction through a special technique known as stick (chalk), observed and warmly acclaimed by the audience at the Lake Jarun. The ceremony was concluded with a flying programme by the Croatian Air Force and Air Defence’s Aerobatic Group “Wings of Storm“, who performed a 8-min sequence including the salute flypast, the loop, the barrel roll and sloped loop, single barrel rolls and double and triple mirror –dia.