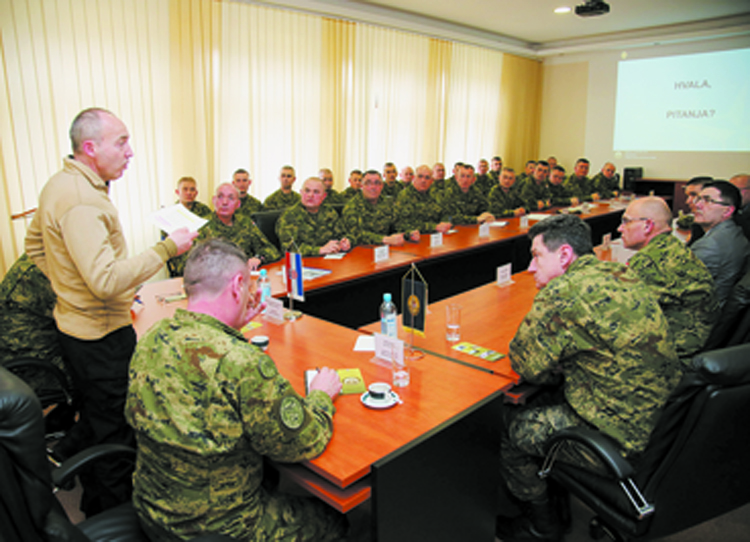 The Ministry of Defence has placed focus on the human resources – enlisted soldiers, NCOs and officers and on providing better working and living conditions and it has taken concrete steps in that regard which reflect on each member of the Croatian Armed Forces The Minister commended the entuousiasm, the knowledge and experience of the Training and Doctrine Command’s personnel which they have invested into the development of the Croatian defence system“. The Chief of the General Staff underlined the efforts invested into the renovation of the Range, offering  high-level training and serving a training purpose for the members of the Croatian Armed Forces. The Minister also visited the Barracks “5. gardijske brigade Slavonski sokolovi” in Vinkovci, housing the Command and some of the subordinated units of the Guards Armoured Mechanised Brigade, primarily the Tactical Operations Centre, the accomodation facilities and phono laboratory and paid respects to the fallen members of the 5th Guards Brigade.  The Guards Armoured Mechanised Brigade, a successor of the legendary wartime units of the victorious Croatian Army, was a well-organised brigade and a backbone of the Croatian Armed Forces, boasting various tasks and built capabilities. Its crucial value, said the Minister, is its personnel, to which the Ministry of Defence attached due attention. “You have been assigned with contributing to the stability and peace in our homeland, assisting its residents in the event of need but also with contributing to the global security and stability through your engagement in international missions and operations“, told Minister Krstičević the members of the Brigade. The ceremony in Vukovar commenced with the meeting with the Mayor of Vukovar Ivan Penava. The Minister confirmed that an engineer unit of the Croatian Armed Forces would be stationed in Vukovar by 18 November (the Vukovar Remembrance Day) at the latest. The respective implementation plan has been approved. The unit will at once enhance the national security and serve as a tangible contribution of the Ministry of Defence to Vukovar“, said the Minister. “These are the main steps undertaken by the Ministry of Defence for Vukovar in the past 25 years. The new jobs in the units in Vukovar will not only mean more security – they will attract young families to the town, which will live along with the military. It will mean more children in  kindergartens and schools, and it was the intention indeed“, said the Mayor. The main graduation ceremony of the students of the military schools will be staged in Vukovar on 25 June – the Statehood Day again – “the right location to promote the Croatian officers and NCOs“, said the Minister.The delegation has visited the barracks of the 204th Brigade of Vukovar, nowadays housing the ” Croatian Homeland War Memorial Documentation Centre”. The Centre grew out of the  Croatian Defence Academy’s Homeland War Museum and Multimedia Department, and became a public institution since January 2014, Pursuant to the respective decision of the Government of the Republic of Croatia.

The visit was concluded with the ceremony of the promotion of two officers of the Croatian Armed Forces – Colonels Ivica Komljen and Željko Živanović – into the ranks of brigade general. The ceremony was held in the Castle of Eltz in Vukovar and was attended by the President of the Republic as Supreme Commander of the Croatian Armed Forces, who presented the generals with the decisions on the promotion, by the representatives of Vukovar and the Vukovar-Srijem County and of the associations from the Homeland War.The President congratulated the promoted officers, whose war experiences dated to the defence of Slavonia and who embodied the new generation of Croatian officers. “Generals Komljen and Živanović will build their wartime and subsequent experiences into the development of the Croatian Armed Forces and will continue their honourable careers“, said the President. Minister Krstičević emphasised that the promoted generals had remarkable histories as Croatian officers and defenders, and Brigadier General Željko Živanović the first general officer from Vukovar after the legendary defender, Major General Blago Zadro. It is a recognition and an obbligation, but has been awarded to the right officer“, said the Minister.The promotion of the two general officers, the stationing of a unit of the Croatian Armed Forces in Vukovar and the reintroduction of military schools graduation ceremony are small yet convincing messages of our respect and support to this town. Vukovar means much more than the tragic date of 18 November, it is in our hearts and thoughts every day“, said the Minister. The Chief of the General Staff said that the ceremony was an occasion to remember the glorious days of the birth of the Republic of Croatia and of its Armed Forces. The Mayor of Vukovar appreciated the occasion showing that Vukovar was home to outstanding individuals such as the newly promoted Brigadier General Živanović, the defender of Vukovar, enjoying the support from his town. Appreciating the trust vested in them Brigadier General Željko Živanović said the rank of general of the Croatian Armed Forces was a major honour and obligation and that serving the homeland was the noblest motivation and that the promotion was an honour both for him and for the residents of Vukovar defending their town“.