Back to homepage »
Share:
The marking commenced with a reveille through the streets of the town, and the delegations paying tribute at the Central Cross at the Zadar Cemetery 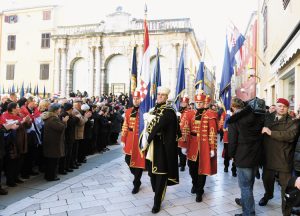 The main ceremony marking the 25 anniversary of the military and police operation “Maslenica“ – a  first large liberating operation  and a turning point in the Homeland War. The main objectives of the Campaigm codenamed “Gusar“ (“Pirate“) conducted by  the three services of the Croatian Army were fulfilled within a  72-hour  time span – nearly 100 km2 of the occupied territory was liberated, the traffic between Dalmatia and the north of Croatia was restored and further military operations were prepared. The marking commenced with a reveille through the streets of the town, and the delegations paying tribute at the Central Cross at the Zadar Cemetery. The wreath  was laid jointly by the Envoy of the President of the Republic Ante Deur, the Deputy Speaker of the Croatian Parliament Milijan Brkić, the Deputy Prime Minister and Defence Minister  Damir Krstičević, the Minister of the Interior Davor Božinović, the Minister of the Homeland War Veterans  Tomo Medved,  the Chief of the General Staff of the Croatian Armed Forces, General  Mirko Šundov and the General Police Director Nikola Milina, the representatives of the counties, towns and municipalities of Croatia, as well as by the representatives of the defenders’ associations and other associations from the Homeland War. The tribute was also paid at the memorial monument to the 3rd Battalion of the 4th Guards Brigade (“Imotski sokolovi“) and at the monument to the fallen defenders of the Zadar area. 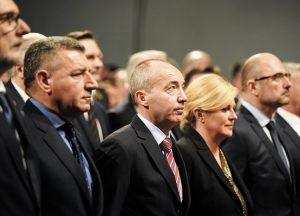 The marking included the marching of the participating units and their flags through the historic centre of Zadar, and a formal ceremony in the Croatian National Theatre in Zadar, which was attended by the President of the Republic as Supreme Commander of the Croatian Armed Forces, Kolinda Grabar-Kitarović, Deputy Chairman of the Croatian Parliament Milijan Brkić, the Deputy Prime Minister and Defence Minister Damir Krstičević,the Minister of the Interior Davor Božinović, the Minister of Homeland War Veterans Tomo Medved, the Chief of the General Staff of the Croatian Armed Forces General   Mirko Šundov, the Deputy Chief of the General Staff, Lieutenant General Drago Matanović, the Director of the General Staff, Rear Admiral Robert Hranj, the Commander of the Operation, Lieutenant General Ante Gotovina, General Police Director Nikola Milina, the Prefect of Zadar County Božidar Longin, the Mayor of Zadar Branko Dukić and other senior military and civilian officials. President Kolinda Grabar-Kitarović emphasised that the Operation ended the two-year siege  of Zadar and its objectives were fulfilled within 72- hour time span.  The President also stressed that the fighting went on for months, and took the lives of 127 defenders, whose valour serves as a model to us. “The Operation “Maslenica” paved the way for the liberation of the whole country “said the President, extending congratulations to the members of the Croatian Armed Forces, as the   The Operation “Maslenica“ and the ensuing operations evinced the moral virtues of the Croatian soldiers who demonstrated true patriotism and bestowed on us the sacred duty to remain devoted to the homeland“. The Deputy Speaker of the Croatian Parliament Milijan Brkić said the marking  was an opportunity to promote truth, valour and patriotism of the Croatian defenders. “The Croatian soldiers and policemen created Croatia that we have today. We owe them eternal gratitude and remembrance“. Minister  Krstičević, himself participating in the Operation, said it was the strategic turning point of the Homeland War, which rejoined the north and south of Croatia and demonstrated that the Croatian Army attained the level of organisation and equippedness necessary to conduct complex military operations. Strategy-wise it demonstrated that the Croatian Army was capable of liberating the occupied territory eracijom “Maslenica” and  it also reinforced the faith in the victoriuos quality of the Croatian Army. The Operation “Maslenica” announced the ensuing victorious operations and demonstrated the victorious esprit of the Croatian Army. “Our Commander, Ante Gotovina passed the values on to us by his own example, energy and will; under his leadership our soldier qualities improved“. Forwarding the congratulations from the Prime Minister, the Deputy Prime Minister and Defence Minister Damir Krstičević stressed that the Croatian Government was paying due attention to preserve the values of the Homeland War and guard the memories of  the glorious and important events in history of Croatia. 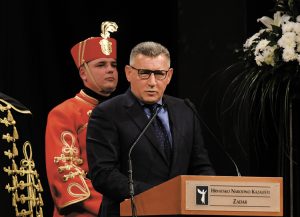 General Ante Gotovina recalled the fulfilled objectives of the Operation (the aggressor forces were pushed backwards and Zadar and its hinterland were safe).  He also stressed that the Homeland War was essentially a response to the aggression on Croatia. “Each war leaves casualties, the war for us was a necessity, rather than an  option.  The Homeland War was fundamental for Croatia’s statehood, the victory brought it independence, security and freedom,. Freedom must be guarded, which is a lasting duty of the homeland security system, with the Croatian Armed Forces as one of its pillars.“ The Mayor of Zadar Branko Dukić and the Prefect of the Zadar County  Božidar Longin in their addresses underlined the importance of the Operation “Maslenica” which revealed the strength and determination of the Croatian Army and instilled faith in the capabilities of the Croatian defenders; it restored morale and ended the agony suffered by  the residents of the town and the County  during the Homeland War. The ceremony was followed by the flying  sequence performed by the “Wings of Storm“ Aerobatic Group over the Zadar waterfront, and touring of the tactic display of the weapons and equipment used by the Croatian Armed Forces.