Back to homepage »
Share:
The “Sveti Nikola“ Barracks the Lora Navy Port in Split on 18 September 2015 hosted the central ceremony marking the 24th Anniversary of the Croatian Navy (HRM).The ceremony was attended by the Chief of the General Staff of the Croatian Armed Forces as the Envoy […] 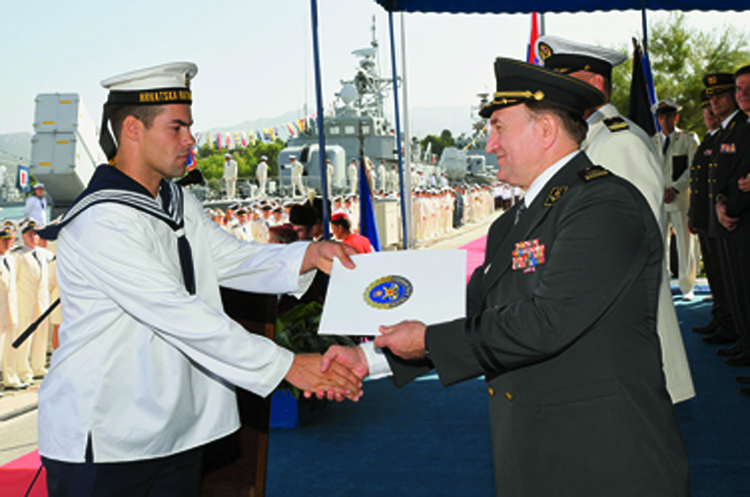 The “Sveti Nikola“ Barracks the Lora Navy Port in Split on 18 September 2015 hosted the central ceremony marking the 24th Anniversary of the Croatian Navy (HRM).
The ceremony was attended by the Chief of the General Staff of the Croatian Armed Forces as the Envoy of the President of the Republic  and the Supreme Commander of the Croatian Armed Forces. General Drago Lovrić, the Assistant Minister as the Envoy of the Defence Minister, Viktor Koprivnjak, the heads and commanders of the MoD and the Croatian Armed Forces units, the former Croatian Navy commanders and members, the representatives of the associations from the Homeland War, of the Military Diplomatic Corps and others.
In his congratulatory adddress General Drago Lovrić commended the Croatian Navy members’ professionalism, the commitment and the loyalty to the homeland. “In 2015 you have demonstrated the capability to project the Croatian Navy’s capabilities far off the Adriatic Coast, as well as the humanity to the people affected by the situation in the Gulf of Aden“, stated General  Lovrić, who also welcomed the announced completion of the study of development  of the off-shore patrol boat, to be used as a platform for the future development of the Croatian Navy’s corvette, of potential use in the kinetic operations at sea.
The Chief of the General Staff also highlighted the upcoming  participation of the Croatian Navy in the Trident Juncture in Spain.
The Croatian Navy Commander, Commodore Predrag Stipanović reminded that the Croatian Navy broke the naval blockade of the Adriatic and defended Split in 1991, connected Dubrovnik with the rest of Croatia under hardest circumstances and took part in the liberating operations.
“The Croatian Navy is the principal asset of the maritime power, tasked with the protection of the sovereignty, territorial integrity and the national interests at sea, and attaches importance to the  preparation for today’s challenges“, said Commodore Stipanovć.
The Croatian Navy Commander also tackled the recent firing of the RBS -15B missile and high asset operationability and underlined the need for the modernisation of the fleet and of the radar, and anti-mine systems. Cdre Stipanovć also highlighted the increased participation of the Croatian Navy in the international operations, namely EU NAVFOR Atalanta and Triton aboard the training ship “Andrija Mohorovičić“  whose crew has rescued 1500 refugees in the Mediterranean waters.
On the eve of the central ceremony the delegations laid wreaths and lighted the candles at the central cemetery in Split and in front of the memorial monument of the Croatian defenders of the Homeland War, followed by the holy mass served in the Sv. Ante church at Poljud, by the Military Ordinary of the Republic of Croatia, Msgr  Juraj Jezerinac and the lighting of the candle in the Memorial Room of the Croatian Navy’s  Command.
The Navy Orchestra and the Vocal Ensemble Sveti Juraj will perform in honour of the anniversary  in the Riva in Split on Friday 18 September.   The date was chosen to honour the association of the year 887 AD and the victory won by the Duke Branimir against Venice in the central Dalmatian aquatorium  with the the decisive events in the Homeland War in September 1991.