Back to homepage »
Share:
In 2016 the Combatant Diver Course was conducted for the third consecutive year and was attended by cadets from the military academies from NATO and the EU nations and partner countries. There were 28 cadets, eight of whom from Hungary, the Republic of Poland and […]

In 2016 the Combatant Diver Course was conducted for the third consecutive year and was attended by cadets from the military academies from NATO and the EU nations and partner countries. There were 28 cadets, eight of whom from Hungary, the Republic of Poland and the Slovak Republic. The Croatian participants were the first the second and the third year students and had to meet the criteria for the admission to the Course.

The cadets of the Croatian Defence Academy “Dr. Franjo Tuđman” from 20 August – 3 September 2016 attended the third consecutive Combatant Diver Course in the Barracks “Sv. Nikola” in Split. It was attended by 28 cadets, eight of whom from Hungary, the Republic of Poland and the Slovak Republic. The main authority of the Course was the Croatian Defence Academy “Dr. Franjo Tuđman”, and administered the Course jointly with the Croatian Army, the Croatan Navy, the Croatian Air Force and Air Defence, the Special Forces Command and the Support Command. 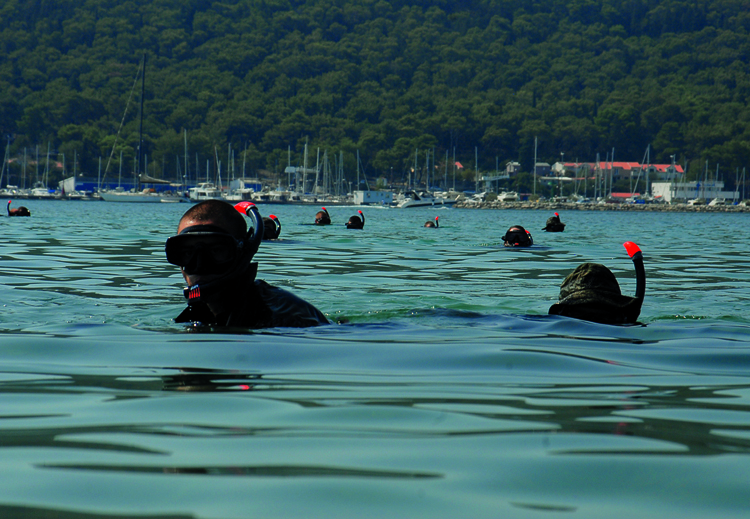 The Commander of the Cadet Battalion of the Croatian Defence Academy, Major Tomislav Kasumović, managing and co-ordinating the Course activities, presented the importance of the Course:

“In 2016 the Combatant Diver Course is conducted for the third consecutive year, at the international level, engaging the cadets from other military academies, NATO nations and the EU. It is administered in English and is regarded as a special cadet training content. It admits all cadets who fulfilled all their academic and the military training commitments during the academic year. For the first time the Course 2016 is attended by officers from Croatia’s partner countries: Major Dariusz Piątkowski of the Polish Armed Forces and Captain Geza Horvath of the Hungarian Armed Forces. The Croatian participants were the first, the second and the third year students had to meet the criteria for the admission to the Course.  Major Kasumović underlines the specificity of the Combatant Diver Course:“the specificity of the Combatant Diver Course lies in the joint administration by the three services of the Croatian Armd Forces: the Army, the Navy, the Air Force and Air Defence, assisted by the Special Forces Command and the Support Command, whil the Croatian Defence Academy was the training authority. The Course gave the Croatian cadets the unique opportunity to familiarise and co-work with the members of other services and commands, which is of great benefit as they will, upon the completion of their education, be assigned to some of them“ The cadets acquire the required techniques, tactics and procedures of overcoming water obstacles and overcoming using solely the individually issued equipment. To acquire the ability to overcome water obstacles in rivers, lakes or at sea is the objective of the combatant diver course. Major Kasumović concludes: “The Croatian Defence Academy will continue to organise and administer the Combatant Diver Course once a year, but in the event of an increased interest, it is possible to expand it to several events annually“.

The 2016 Combatant Diver Course features a novelty, says the Cadet Battalion Commander, Major Tomislav Kasumović, the combatant diver badge. All graduates are entitled to wearing metal numbered badge – a form of visual identity and a symbol of successful completion of the course”.

As instructor of the Polish Air Force I am well-experienced in training the cadets in aircraft, parachuting, simulator operation, but I have had no experience in maritime activities. I am glad to be here in Split and to have had the opportunity to take part in the Course, which is a wholly new experience for us, including the joint training of cadets from a number of countries. Although intensive and demanding, the Course is not too hard for me – I possess the diving, swimming and kayaking skills, but it requires considerable effort from young cadets.

I am the commander of the Hungarian cadets and have attended the Course with two of them. This is my second activity in Croatia, as I was here three years ago, and my experience with the co-operation Croatian soldiers is excellent. The Course is physically and psychologically demanding, but it also very interesting and at once a great opportunity and a challenge for us, particularly for us coming from a non-maritime land. It also paves the way for close co-operation among the cadets from Hungary Slovakia, Poland and Croatia. The co-operation is fruitful as all participants have displayed the comparable level of trainedness. A lot of joint hard work, joint practices, with participants sharing the burden of the assignments and getting closer along the way. A commendable opportunity and environment for the development of the cadets.

The Combatant Diver Course and our stay in Split are an excellent opportunity to meet and acquire some new skills which is not available at home. The hardest thing is the all-day training, sometimes for15 hours a day.  On the other hand, it gives us the opportunity to meet cadets from various countries, meet their cultures and get information on the respective cadet training and life and practice talking in English. If I’ll have an opportunity I shall be glad to come again.

The Combatant Diver Course here in Split is important for me for giving me the opportunity to test my abilities and to compare them against those of my colleagues and to acquire new skills.  The Course here in Split is a wholy new experience for me, as an air force cadet I had no opportunity to swim, and here I can develop my abilities and combatant diver skills.