Back to homepage »
Share:
The live exercise was conducted in Norway from 25th October to 7th November. Although they did not come out in big numbers, the members of the Croatian Armed Forces played an important role before and after this year’s biggest NATO exercise and will continue to do so after its conclusion… 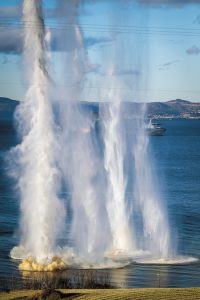 Military exercise Trident Juncture 18 is a NATO high-visibility exercise. Hosted by Norway, the exercise aims to test international forces’ interoperability in joint operations and NATO’s capabilities in retrieving an ally’s sovereignty following an armed aggression. Further, it aims to assess and confirm NATO’s Response Force 2019 (NRF19). About 50,000 soldiers from 29 NATO countries and two partner countries (Finland and Sweden) are taking part in the exercise, along with 250 aircraft, 65 vessels and up to 10,000 vehicles.

When talking about the Croatian Armed Forces’ participation in NATO’s biggest exercise this year, it is inevitable to mention the previous edition of Trident Juncture, in 2015, when Croatian soldiers debuted at NATO’s exercise at the highest level. The time of the year when the previous exercise took place was roughly the same, but the locations were, at least at face value and as far as climate is concerned, much more hospitable than Norway: the locations of Trident Juncture 15 were Spain, Italy and Portugal. The Croatian Armed Forces contributed to that exercise with a mechanized platoon of the Battalion “Gromovi” (“Thunders”) of the then Guards Motorised (today Mechanised) Brigade and with several other members of the Battalion “Gromovi” who were tasked with support to the exercise or the supervision of it. The members of “Gromovi” were active at the training centre “San Gregorio” near Zaragoza in the east of Spain. 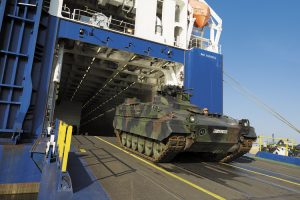 Furthermore, members of Croatia’s Deployable Communication Module (DCM) were deployed to several locations around Spain. This is one of four DCMs and it is the only organizational unit made up of members of Croatian Armed Forces that is under NATO’s direct command. It is assigned to the 1st Signals Battalion of NATO Communication and Information Systems Group (NCISG), a component of Supreme Headquarters Allied Power Europe (SHAPE). The battalion’s main task is to set up, maintain and operate communication and information systems of NATO forces’ deployable command in the area of an operation, mission or military exercise. Although the unit was established only a short time ago (in 2014), its members have already participated in a large number of activities – from eastern and western Europe all the way to Turkey and Afghanistan.

As far as Trident Juncture 18 is concerned, Croatian DCM is once again a permanent fixture. Of 30 men in Croatian military uniforms in Norway, two dozen belong to the DCM and the Croatian Army’s Signal Battalion with six motorised vehicles and five trailers. They are based in the town of Røros in central Norway. Their main task is to provide communication and information support to the command post of Land Command’s (LANDCOM) Local Operations Control (LOPSCON) during the live exercise (LIVEX) though the usage of the deployable communication and information system LINC-E2 and the satellite system TSGT L. How complex their job is can best be described by the fact that they came to the north of Europe on 30th September and stayed there until 13th November. 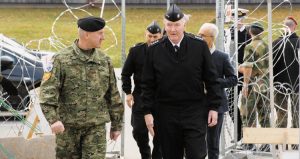 Apart from the Signal Battalion, Croatian Armed Forces are also visibly represented by their logistics officers, headed by Brigadier General Darko Pintarić, who is currently assigned to duty in Allied Joint Forces Command Naples (JFC Naples). In Norway, he commands the Joint Logistics Support Group (JLSG), the command of which is based in the village of Sessvollmoen in the south of Norway. The group is in charge of organizing and securing the movement of troops, vehicles and provisions for all participants of Trident Juncture 18 from the moment they enter Norway until they reach their destination. It is further in charge of providing forces with supplies during the exercise and securing the return of troops to their home base after the conclusion of the exercise. Alongside General Pintarić, two other members of the Support Command are taking part in the exercise from September to December: Captain Vedran Barić and Captain Tomislav Komjetan.

“As the commander of the JLSG, I am extremely proud of the important role that logistics has played in planning and conducting the exercise. I am also proud of all members of the Command as well as JLSG’s troops for their expert and responsible execution of all tasks,” General Pintarić says.

General Pintarić stresses that the exercise’s Logistics Group, which is made up of 1000 men, reflects NATO’S collective spirit. ”It can already now be said that the Logistics Group has successfully completed its first task, which included the reception of personnel, vehicles and participants’ equipment in specified seaports, airports, railway stations and border crossing points; the provision of food and accommodation for the participants; the refuelling of vehicles; and the provision of transportation to their final destination in Norway, where the live exercise was conducted. As had been planned, the majority of the forces, their number equalling the number of men in seven brigades, reached their final destination on the Norwegian land in less than a month simultaneously, synchronisedly and without significantly disturbing the local population. The logistics has proven that NATO is capable of quickly deploying its forces in case any of its member countries needs to be defended. What is more, NATO’s concept of a Joint Logistics Support Group has been tested. This is the first time in history that tasks on a NATO member country’s territory are being executed in such a way in a collective defence scenario,” General Pintarić concludes. 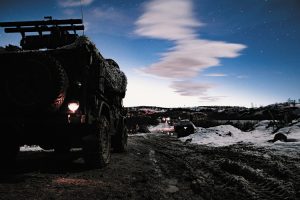 The Logistics Group is taking part in the exercise from August to December. In the exercise, it is tasked with coordinating the logistic support on the highest level, storing fuel and distributing it to logistic brigade troops as well as transporting fuel and refuelling helicopters on prominent field locations. Once the exercise is over, the Group will organize and secure coordinated and synchronized conveyance of forces from Norway. Back in August, an article about logistic officers’ preparation for Trident Juncture was published on JFC Naples’ website. Its author, 1st Lieutenant Kylee Ashton points out that about one hundred members of the Command, led by General Pintarić, are in charge of over 40,000 people: “While the role of JLSG may seem subtle, it is inherently the backbone of Trident Juncture.” 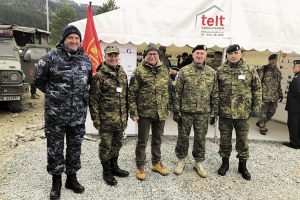 The Distinguished Visitors Day was held in Byneset near Trondheim in central Norway on 30th October. The DV Day was attended by the Chief of General Staff of the Croatian Armed Forces General Mirko Šundov and his associates. Around 500 guests (military and civilian national and international representatives) attended the demonstration of amphibious landing supported by air and land forces.

General Šundov lauded the members of the Croatian Armed Forces for their participation in the exercise. He stressed that the exercise was a confirmation that the allies were united and trained in deterring opponents and defending NATO member countries’ territories, in accordance with Article 5 of the North Atlantic Treaty. “Today, we demonstrated our capabilities to conduct operations in all domains of warfare,” General Šundov concluded.

During the DV Day, General Šundov met the Secretary General of NATO Jens Stoltenberg and the Commander of Allied Command Operations (ACO) and the US European Command (US EUCOM) General Curtis Scaparotti. While touring the weapons’ display, he also greeted members of the Croatian Armed Forces.