Back to homepage »
Share:
The crews of the Firefighter Squadron of the 93rd Air Base of the Croatian Air Force and Air Defence on 6 December returned from the firefighter assistance mission in Israel to their home base in the Barracks “Zemunik“.They were welcomed back by the Deputy Prime […]

The crews of the Firefighter Squadron of the 93rd Air Base of the Croatian Air Force and Air Defence on 6 December returned from the firefighter assistance mission in Israel to their home base in the Barracks “Zemunik“.They were welcomed back by the Deputy Prime Minister and Defence Minister of the Republic of Croatia Damir Krstičević, the Special Advisor to the Deputy Prime Minister, Lt. Gen. Ante Gotovina, the Commander of the Croatian Air Force and Air Defence, Brigadier General Miroslav Kovač and the Commander of the 93rd Air Base, Colonel Karol Lučan. Minister Krstičević congratulated to the firefighter crews on their achievement and assistance to the Israeli people, earning them the praises and recognition from the President of Israel Reuven Rivlin and the Prime Minister Benjamin Netanyahu.

“You have showed strong capability, determination and readiness to assist the victims of the disaster, arriving among the first to Israel and taking the decisive role in the firefighting, which has made you heroes both in Croatia and in Israel”. The Minister expressed his pride over the professional and human performance of the Croatian firefighter crews. “You have also demonstrated the focussed, responsible and human approach to the tasks by Croatian soldiers, the members of the victorious Armed Forces, which makes them  a recognisable brand”, said the Minister.

The crews were addressed by Lt. Gen. (Ret.) Ante Gotovina , Special Advisor to the Deputy Prime Minister: “We are glad to welcome back our crews, who gave the helping hand to those in need and displayed skills and preparedness to fight the fires beyond the territory of Croatia”.

The Commander of the Firefighter Squadron, who also commanded the Croatian firefighter contingent in Israel, Lt. Col. Davor Turković said that the crews returned with strong impressions. “We reacted in within the shortest time possible and assisted Israel in the critical moment. The Israeli Prime Minister therefore visited us, saw our aircraft and talked to us as the Croatian experience in aerial firefighting and building the fire security might be of much use for Israel as well”, said Lt.Col. Turković. For the outstanding results and contribution to the promotion of the capabilities of the Armed Forces and the reputation of the Republic of Croatia in the world, pursuant to the decision by the Defence Minister Krstičević, the members of the crews were presented with binoculars. 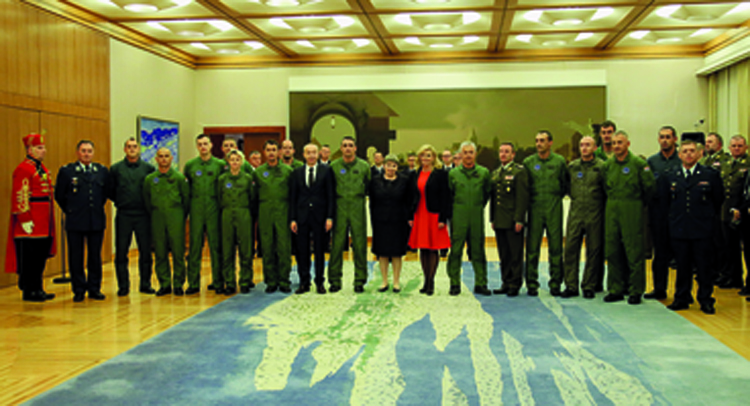 The President of the Republic receives the firefighter crews

The President of the Republic of Croatia as the Supreme Commander of the Croatian Armed Forces Kolinda Grabar-Kitarović received the  Croatian firefighter crews who were engaged in the international firefighting mission in the State of Israel.

“Croatia is facing, both independently and as member of the European Union and NATO, the instability from the north of Europe to the Middle East and north Africa and from the traditional military security threats to the asymmetric and hybrid threats as well as the  security threats arising from natural disasters and climate change. Hence the growing need for the use of the Armed Forces in non-military tasks and in the domains which have so far been in the responsibility of the civilian institutions”, said the President .The President stressed that the Croatian Armed Forces possess the capabilities and sufficient technical and material support for the implementation of non-traditional military tasks and reminded of the engagement of the Croatian  crews in international firefighting or flood relief missions in Greece, Bosnia and Herzegovina, Montenegro, Macedonia, Serbia and Portugal.

“Along with the direct effects, the relief activities have enhanced the bilateral relations between the Republic of Croatia and these countries.  Therefore, I did not hesitate for a moment to give the consent for the proposed Decision of the Croatian Government on the dispatching of the Croatia firefighter forces to the humanitarian mission in the State of Israel. As President of the Republic and the Supreme Commander  of the Croatian Armed Forces, I would like to sincerely congratulate all crew members of the fire-fighting aircraft, members of the Croatian Air Force and Air Defence taking part in the humanitarian mission in the State of Israel on the dedicated engagement and appreciate their honourable representing of our homeland“

The President extended the appreciation to the Israeli Ambassador to the Republic of Croatia Zina Kalay Kleitman for the trust vested by the State of Israel inviting the Croatian pilots to assist in the firefighting and for the cordial reception of the crews and the support provided to them during their mission in Israel.