Back to homepage »
Share:
On the eve of the marking of the 23rd anniversary of Operation “Storm“ three multi-role fighter aircraft F-16 landed for the first time in the 91st Air Force Base of the Croatian Air Force at Pleso 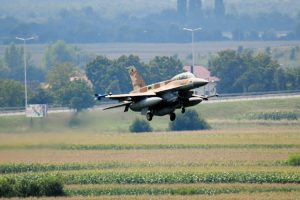 He stressed that the top moment of the Israeli F-16 is in the joint flypast of the Croatian and Israeli aircraft over Knin. “The historic decision of the Government of Croatia to procure multi-role fighter aircraft F-16 made the dream of the fallen hero of the Croatian Air Force, Rudolf Perešin and other fallen pilots from the Homeland War a reality for today’s generations. The procurement of the F-16 aircraft is a major technological advancement and will significantly upgrade our capabilities”, concluded Minister Krstičević..

The Ambassador of Israel to Croatia, H.E. Zina Kalay Kleitman stressed that the procurement marked the beginning of co-operation and partnership between the State of Israel and the Republic of Croatia. The Ambassador extended appreciation to the Croatian Prime Minister and Defence Minister for initiating and supporting the historic project of co-operation

The Chief of the General Staff of the Croatian Armed Forces, General Šundov underlined that Croatia retained the air force capability and thereby ensured the protection  of its air space.

“Following  Lt. Col. Željko Ninić’s recent  experience with F-16  an Israeli pilot flew aboard a MiG-21, which is a confirmation of our  strategic  partnership  and friendship with the State of Israel. As Defence Minister I am glad that the Croatian pilots will soon have the opportunity to learn from the best – from Israeli military pilots“, said Minister Krstičević..

General Šundov said Croatian pilots again demonstrated high readiness and competence. “I am sure that the joint flypast in the ceremony in Knin will send out a clear message of friendship between Croatia and Israel and a message of peace 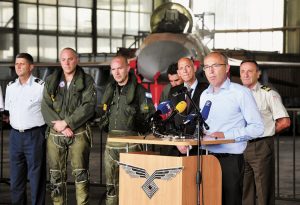 The Defence Attaché  of  Israel to the Republic of Croatia, Colonel Harel Taggar said he was looking forward to the co-operation and new challenges. “We are today opening a new phase of the strategic co-operation between our two countries and their armed forces and air forces. The flypast of F-16 over Zagreb and Knin is a realisation of a great dream . The Croatian Armed Forces made a new progress towards overall development, and development of the Air Force, which will soon have a place among the modern  air forces of the west“.

The Commander of the  “Ramat David”  Air Base expressed the honour to visit the Air Base at Pleso and that the flight to Croatia was an extraordinary experience. “I am glad that we flew to Croatia on our aircraft ; it was a unique experience for the entire team and me too to fly over  this beautiful country“. The Commander of the Croatian Air Force, Brigadier General Mato Mikić, said: “This is the first step in the modernisation of the Croatian Air Force with the F-16 aircraft, We accept readily the challenges before us, I believe our Israeli friends will assist us. “ We will do our best to see the first two aircraft  flying to mark the 25 anniveraary of “Storm“ in 2020.

General Šundov said Croatian pilots again demonstrated high readiness and competence. “I am sure that the joint flypast in the ceremony in Knin will send out a clear message of friendship between Croatia and Israel and a message of peace. The commander of  the “Ramat David” Air Base praised flying the MiG-21 with Lt. Col. Jagodić “Croatia has excellent and very professional pilots and I believe that their experience with MiGs will be useful with flying F-16, which is a western model of fighter aircraft that fulfilled all tasks and purpose in Israel.. It was designed to accodmodate the pilot and his needs; I believe that Croatian pilots will enjoy flying them“.

Lt. Col Jagodić for his part appreciated the visit of the Israeli colleagues and underlined the importance of the visit of the commander of the Ramat David Air Base where the Croatian pilots will take the training; the visit is a good opportunity to realise their quality and professionalism and the excellent performance

The Director of Israeli SIBAT, General Mishel Ben Baruch praised the good military co-operation betveen Croatia and Israel and the competence of Croatian pilots; he also expressed appreciation and the honour of being invited to attend the marking of the 23rd anniversary of the Operation “Storm“ in Knin.