SFC Gabrijela Novak, a member of the Multi-purpose Helicopter Squadron, is hard to find in the Base, usually taking part in an exercise or other tasks throughout the country or abroad as the rest of the Squadron.
She has served three terms in KFOR so far. Along with exercising professionally a role indispensable to the pilots, although they are the first associated air specialty, SFC is unique for being the first woman to be certified as aircraft technicians in the Croatian Air Force and Air Defence. She however prefers not to look through the gender prism but insists on talking primarily about her specialty and operating the helicopters. “We are foremostly aircraft technicians, and then crew members. We take part in the flights as third crew member, but  do all the pre-flight work. One or two aircraft technicians may be aboard“.
Aircraft technicians conduct the ground preparation of the aircraft, the pre-flight, thru-flight and post-flight checks.
During flights aircraft technicians start the engine, montior their instruments and perform their duties, primarily in special missions.
In the cargo compartment, they do the task of crew chiefs. In the event of landing on a harsh or unsafe terrain aircraft technicians stand at the helicopter door strapped in, observe and feed the information on the landing spot to the pilots and assist them in manoeuvering the helicopter. The hardest task is flying using the night vision goggles. he aircraft technicians serve as an extra eye to the pilots; the vision angle being only 45 ̊, and the technicians warn the pilots of the air traffic situation, the electric power transmission lines, antennas or tree tops on the route.
When the helicopter carries suspended loads, the aircraft technician monitors the load through the floor door during the flight.
Aircraft technicians also operate the side cranes, which are critical in special operations, when special forces members rappel from the helicopter, brief the passengers on safety measures and prepare them for the flight. Aircraft technicians have a broad spectrum of tasks, which requires thorough familiarity with the helicopter specifications and all phases of flying tasks, combined with composure and physical fitness.
Air technicians (SFC also refers to as “air mechanic“) who want to join the crews need to pass strict medical criteria, and the commanders’ and pilots’ assessment of aptitude. “The thumb up for me was a recognition and honour to me, and a progress in my career“. After an additional rigorous training in 2011 she was assigned to the coveted duty. The success was facilitated by her former experience (she was member of the Croatian Air Force units in the “Lučko“ Air Base since the Homeland War). 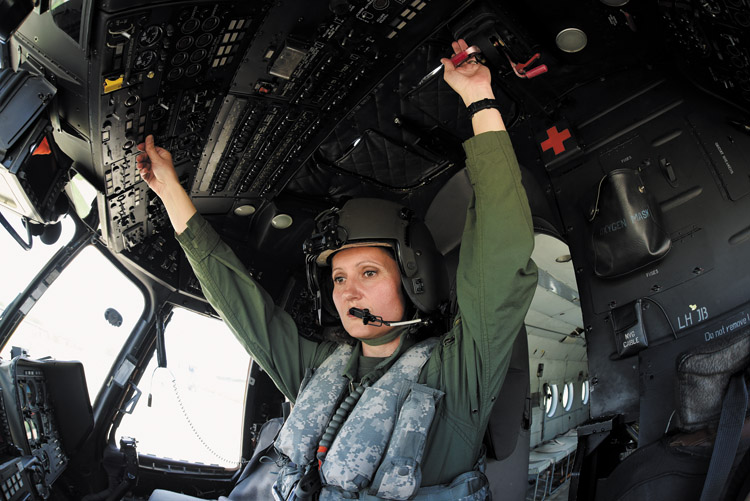 “I remember being attracted to aviation in the sixth grade elementary school and when I learned that there was an air force personnel training centre in the vicinity I made my decision.“. She said it was not a pilot career that interested her but aircraft mechanic. After the graduation and application for job in the Air Force, the was the sole female member of the “Lučko“ Base.
“I had not had too much hope of getting in, not because of my aptitude but as woman I saw no odds against the male majority, but I did, I remained in the military and advanced“. She did not only advance in the demanding duty but also graduated in aircraft maintenance from the University of Applied Sciences of Velika Gorica and also founded a family.
“The study complemented my previous expertise. My wish was to crown  the entire process and the many details related to aircraft maintenance, with no room for improvisation and faults“, says SFC Novak, who seems to have studied primarily as an aviation enthousiast, to meet her own interests.
We also touched upon the demanding nature of the job. SFC Novak said the job was difficult but that the practice, self-care and persistence were of great help. “My conviction is that if you can’t do some aspect of a job, it’s not for you“. I cannot do the job of a technician if I cannot lift something by myself or I need to have five assistants around. I can do everything and it makes me happy“. The job of air technician is about dexterity, which we saw for ourselves. At the apron, where we went to take some photos, SFC Novak climbed atop the helicopter, using the grips and holds unvisible to our eye, before our camera was prepared. She displayed her abilities during the term in KFOR, which she described as “a positive experience, doing the familiar work, only in a much different environment“.
SFC said her impression was that women were more numerous in the air forces of the western countries, and she learned that in Russia there were no women air technicians whatsoever.
For the time being the first and the sole air technician in the Croatian Air Force, SFC gave us a categoric answer concluding the interview. Asked whether, after twenty years of service in the “Lučko“ Base operating multi-purpose helicopters, first the Mi-8 MTV followed by Mi-171 Sh, she still liked her job,SFC Novak answered “I love it and intend to do it until retirement if I remain fit“.