Back to homepage »
Share:
What the pilots of the “Wings of Storm“ value  the most are the commendations and the respect from the pilots of other international aerobatic groups, with whom they only share the flying skills and aerobatic performance. A reason to enjoy the successful co-operation and […]

What the pilots of the “Wings of Storm“ value  the most are the commendations and the respect from the pilots of other international aerobatic groups, with whom they only share the flying skills and aerobatic performance. A reason to enjoy the successful co-operation and joint practice flights with the pilots of the world’s most famous aerobatic team – the Italian Air Force’s “Frecce Tricolori“ and the mutually expressed wish for the co-operation to turn into a tradition.

The visits of pilots and joint performances and exchange of experience are  a common thing for aerobatic groups ; a number of them have during their careers established such co-operation models.  “Wings of Storm“ adopted the practice with the visit to the Turkish aerobatic team  “Turkish Stars“ in the air base in Konya in spring 2009.  The two groups exchanged the experiences and promoted the already good relations, but did not perform joint flights and overflights. In the coming seasons and during the air shows the Croatian aerobatic team explored  the possibilities of co-operation with the Italian aerobatic group.

In summer 2016, the Team Leader of “Wings of Storm“  initiated the formal procedure agreed on by the Team Leader of the “Frecce Tricolori“ group, for  official one-day visits with practice flights and  joint preparation for the performance programmes. The visits offer highly useful pre-season practice opportunities for aerobatic teams at minimal cost.  A 30-min flying distance between the respective  home  bases ( Rivolto Air Base and Zadar Air Base)  enable  the groups to conduct the complex activities within one-day time span. In laymen’s eyes the manoeuvres are the most complex segment of the performance  in airshows but pilots claim to the contrary. The manoeuvres are the easiest part for them, as they are well prepared and continuously trained for. What they find much more predictable and stressful is the planning and safe conduct of international overflights through often unfavourable weather conditions, as well as landing on foreign airports to attend the aircraft in time constraint and quick adapting to unfamiliar performance locations  (in the sense of identifying the reference and landmarks, as it is impossible to simulate within the regular preparations at home airports and within the national air space. The opportunity to train the procedures at such proximity from the home airports was of great benefit for both aerobatic groups. 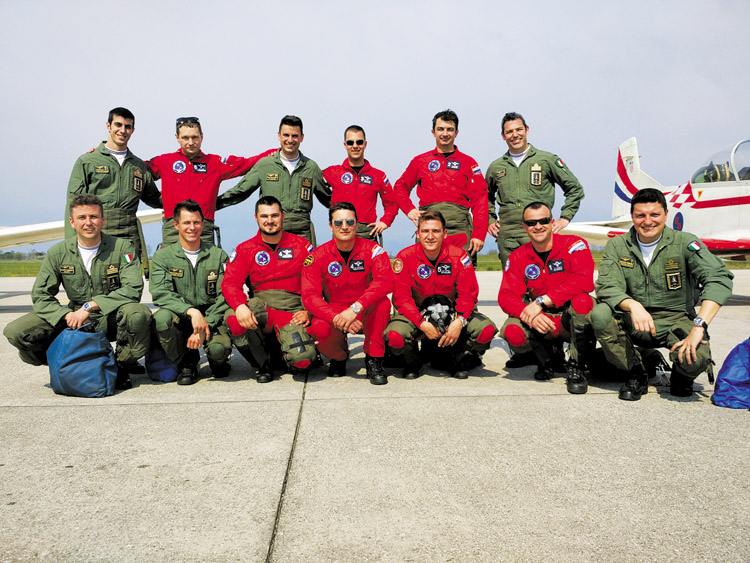 “Frecce Tricolori“ flying over the waterfront in Zadar

The groups agreed on 22 March as the acceptable date for the Italian group to attend  the ceremony marking the 25th anniversary of the 93rd Air Base, the home unit of “Wings of Storm“. Unfortunately, due to dense fog in northern Italy “Frecce Tricolori“ arrived to  Zadar the following day. The peak moment of the interesting and productive day was the practice flight performed by “Frecce“ over the Zadar waterfront.  Although flying in a reduced formation (7 aircraft) and programme the most famous Italian aerobatic group drew the attention and delighted large audience. Two pilots of the “Wings of Storm“ had the privilege to fly with them on that occasion, although  it had been planned to take place during the Croatian visit to Rivolto.  Prior to departing, the Commander of the Italian group,  Major  Mirco Caffeli expressed satisfaction over all segments of the visit to the Croatian aerobatic group, and praised the opportunity his group had to practice the programme over the sea surface, in ideal conditions provided by the Zadar Channel, with superbly prepared referent marks at sea. The latter part of the activity was scheduled on 4 April, when the Wings of Storm“ took off towards the Rivolto Air Base. The Group performed two practice flights, to give all 11 Italian pilots the  opportunity to fly with their Croatian colleagues, and one flight by “Frecce Tricolori“ with the six pilots who did not fly with them in Zadar. It was hard to tell whether it was the Croatian pilots that were more impressed by the performance of the “Frecce Tricolori“, particularly the precisely performed breaks and rejoins  or the Italian pilots by the demanding negative G manoeuvres which are the specialty of the “Wings of Storm“.

It was the second visit of the “Wings of Storm“ to the Air Base Rivolto, a – the first occuring at a large international air show marking the 50 th anniversary of  “Frecce Tricolori“. “Wings of Storm“ performed for 500,000 spectators, which was the largest audience for them and the moment the Group earned a place among the world’s best known aerobatic groups.  The Team Leader, Lt. Col. Damir Barišić and 1st Lt. Darko Belančić as Team Commentator from the present line-up took part at the show.  For all other pilots the visit to Rivolto was a first opportunity to familiarise with the daily routine of a foreign aerobatic group.  They may share similarities with many of them, including the Italian Group, in terms of flying skills, pilot selection and training modalities, sequences design and performance planning, but the insight into their daily routines and living and working conditions reveals many background differences.

The “Frecce Tricolori“ are the only user of the Air Base Rivolto and also of the respective air space.  Structured as squadron the Group comprises various functional areas – logistics, support, public affairs, photo and video production unit, fitness facilities and are focussed on practicing and performing the programme , for which they use particular aircraft, to enable the pilots adapt to the characterictics of the aircraft assigned to them  and they perform two to three practice flights on each flying day. It has been the Group’s routine for the past 57 years, whereas for the “Wings of Storm“ the situation has been quite different. They are not a squadron but a group of  six selected and specially trained pilots of  the Fixed-wing Squadron of the 93 rd Air Base in Zadar. They are primarily instructors to pilots of various profiles and it is often hard to gather them all to practice . They spend  one 20-minute flight per week to practice for the sequences, flying the aircraft of the Fixed-wing Squadron  available for the purpose. The Squadron’s primary tasks have precedence over the Group’s aerobatic practice. Furthermore, the airspace over the Zadar Airport is crowded by the aircraft from several squadron, and the commercial airlines have the priority  and in high season they multiply and limit the use of the airspace for the “Wings of Storm“.

However, over the past decade of its existence the “Wings of Storm”have won the attention of millions of enthousiasts across Europe with their skillful performance of eye-catching manoeuvres, the prizes at most prestigious airshows and acted as one the most recognisable and widely known ambassadors of Croatia. With all the prizes won, what the pilots of the Group value the most are the commendations and the respect from the pilots of other international aerobatic groups, with whom they only share flying skills and  aerobatic performance. Therefore, the successful co-operation and joint flying of the two world’s probably best known aerobatic groups, the enthousiasm of the pilots and the expressed wish to see it turn into a tradition is comparable to “Wings of Storm“’s last year’s winning the main prize at the RIAT in the United Kingdom. Until a new encounter , either in Zadar or in Rivolto,  it only remains to wish the two groups a successful performance season 2017

Photos: photo archive of the “Wings of Storm“