Back to homepage »
Share:
The 1st and the 2nd Artillery Batteries of PZH 2000 Howitzers of the Artillery and Rocket Regiment  performed live firing in the "Eugen Kvaternik" Training Range on 28 and 29 April 2018, as a trainig activity 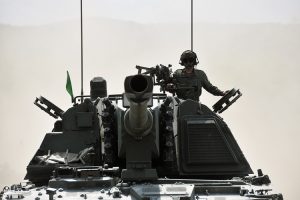 The 1st and the 2nd Artillery Batteries of PZH 2000 Howitzers of the Artillery and Rocket Regiment  performed live firing in the “Eugen Kvaternik” Training Range on 28 and 29 April 2018, as a traiing activity used also to test the new ACCS-Artillery command and control system, providing a real-time relay of the call for fire from the observation post to the fire unit and monitors the status of a fire unit. The firing was observed from the observation post at Debela Glava, by the Chief of Staff and Deputy Commander of the Croatian Army Brigadier General Boris Šerić, the Commander of the Artillery and Rocket Regiment Colonel Marijan Cikuš and the Commander of the Self-propelled Howitzer Battalion Major Dražen Musić. All the procedures undertaken at the firing site, as well as the target area and the scores were observed on the computer screens at the observation post. The target area was 10 km off the firing site – in the areas of the hills Brkuša and Palež; each of the four Howitzers engaged the linear targets with three shells and point targets with ten shells  (A total of 90 M – 107 shells were fired during the event). The Artillery Command and Control System, manufactured by the KMW, tested during the firing enables real-time relay of the calls for fire  from the observation post to the fire unit and monitors the status of the fire unit. After the “open fire“ order was issued, the first shots were fired and corrections were made the firing went on according to the planned dynamics and procedures. The screens displayed the fire control squad acquiring a target  within an area and communicating the details (the location, and size) to the calculating squad  issuing the parameters to open fire and shell firing  as well as the information on the howitzer engaged in firing.  Each howitzer can autonomously compute the firing elements and adjust the bore axis and elevation angle, followed by the loading and firing. In addition to the enabling the monitoring of the overall firing task cycle – from the deployment of the howitzers to the firing itself the ACCS also provides the target data, which are used to adjust the co-ordinates and fire additional shells as  necessary. Another objective of the firing was to fully synchronise and integrate all elements involved in its implementation, primarily through continuous and comprehensive tactical training in real-like conditions provided by the “Eugen Kvaternik“ Training Range. 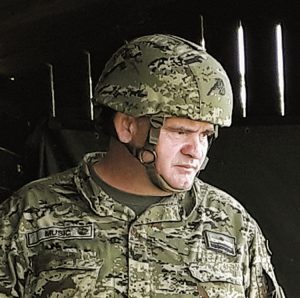 As Battalion Commander I commend the crews, platoons and the batteries’ performance, as well as the performance of the maintenance personnel, in charge of the stability of the Howitzer during the activity. The firing displayed the Howitzer’s superb precision and firepower.