Back to homepage »
Share:
The commemoration ceremony for the heroic pilot of the Croatian Air Force, Staff Brigadier Rudolf Perešin, titled “23rd Meeting in honour of Rudi” took place on 13 September 2020 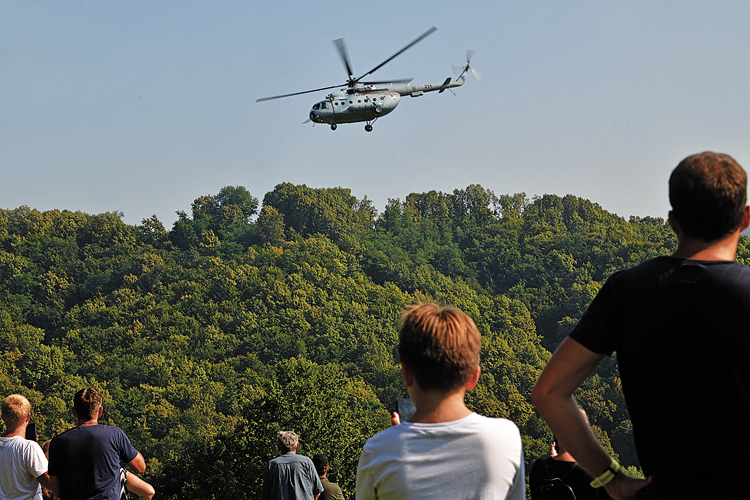 The COVID-19 virus pandemic in May this year brought two disappointments for the Croatian aviation enthusiasts. The traditional meetings in honour for Rudolf Perešin in Gornja Stubica scheduled from 8 to 10 May, and the first Croatian international military air show CROIMAS 2020 which was due to take place on 30 May were delayed. While the air show in Zadar had to be cancelled for location and organisation reasons, the traditional tribute to the heroic pilot of the Croatian Air Force Staff Brigadier Rudolf Perešin was stronger than the epidemic, and was held on 13 September. The Municipality of Gornja Stubica and the Zagreb Aviation Technical Association, assisted by seven institutions, among which the Croatian Air Force, prepared a reduced but impressive flying programme.

“I believe that Rudi is watching us from above and that he is glad,” said the Envoy of the Mayor of the City of Zagreb Miodrag Demo during the opening of the air show. Gornja Stubica and its surroundings as Rudolf Perešin’s birthplace remember him with great pride. A Croatian Air Force’s MiG 21 (placed in 2004 and renovated in 2018) is placed in a nice small park, near the bust and a plaque with Staff Brigadier Perešin’s impressive biography.

Rudolf Perešin’s Memorial House in his birthplace (Jakšinec) will be completed within two years, as announced. Among the visitors at the memorial air show were the Envoy of the President of the Republic of Croatia and the Commander of the Croatian Air Force Brigadier General Michael Križanec, special advisor to the Prime Minister Damir Krstičević, the Envoy of the Defence Minister Tomislav Ivić and the United States’ Ambassador to Croatia H. E. Robert Kohorst. 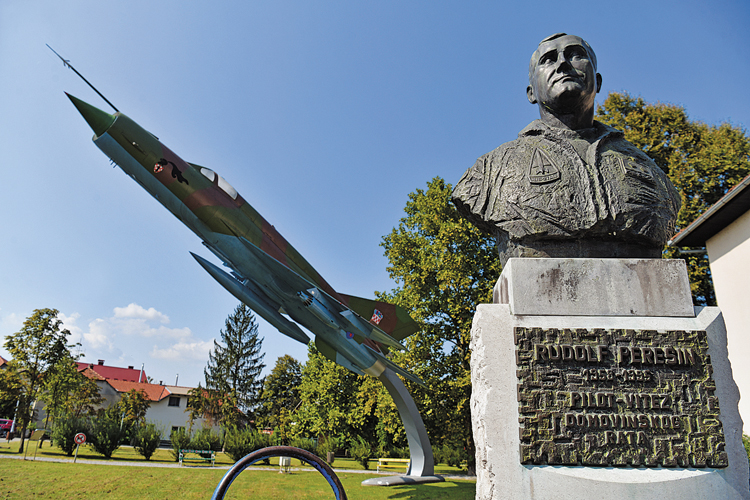 The visitors recalled St. Brig. Perešin’s war history in the Croatian Air Force, shortly after he undertook one of the heroic acts of the Homeland War – the overflight from the air base in Bihać to Klagenfurt. ”I am a Croat, I can’t and I won’t shoot at Croats”, said St. Brig. Perešin. The MiG 21 was returned to Croatia in 2019 and exposed in front of the Ministry of Defence, and more than 150,000 came to see it. “We are proud to have returned Rudi’s aircraft to Croatia, as a witness to the great respect he enjoyed”, said the Envoy of the Envoy of the Defence Minister Tomislav Ivić.

Staff Brigadier Perešin was among the founders of the fighter component of the Croatian Air Force. He executed many sorties, and lost his life in an action during the Military and Police Operation “Lightning” (on 2 May 1995).

Opening the 23rd Meetings for Rudi” Brigadier General Michael Križanec said the heroic pilot valued freedom, pride, honour and Croatian bravery over himself and his family. He risked a lot for the benefit of the Republic of Croatia. “Rudi took off, led and made sacrifice”, said Brig. Gen. Križanec.

The weather was just perfect for the air show.

The organisers announced that the air show would be somewhat reduced, though it primarily referred to the educational and similar activities, and also to the watching made possible from various locations in the area and online (on YouTube), which in a way was an advantage of the 23th Meetings for Rudi.

Two F-16C aircraft arrived from the base in Aviano and one Gripen aircraft from Kecskemét.  Hosts of aviation enthusiasts and families arrived in cars from Zagreb; they observed the impressive aircraft from several posts around Gornja Stubica, one of which was close to the Museum of Peasants’ Revolts, near the sculpture of the leader of the Peasants Revolt of 1573 Matija Gubec by the famous Croatian sculptor Antun Augustinčić, where the commentary was provided. The enthusiasts swarmed from Zagreb and other places, with entire families, to enjoy the Indian summer and to watch impressive aircraft. The locals had the advantage of knowing the best posts to watch from, but probably each visitor around Gornja Stubica was able to see some performances at least.

The “Wings of Storm” performed a sequence in a formation of four aircraft, with smoke trails, which greatly enhances their already attractive flying programme.

The combat aircraft were the absolute attention grabbers, and projected the present situation and the future of the air force.  The air show featured performances by the MIG 21 aircraft Croatian Air Force’s  191st Fighter Aircraft Squadron and by two aircraft models considered to supersede them: two F-16 C of the 555th Fighter Squadron of the U. S. Air Force that arrived from the Base in Aviano and a Gripen of the Tactical Puma Squadron that arrived from the base in Kecskemét. The reactions of the visitors of the 23rd Meetings for Rudi justified the organisation of the ceremony although reduced and held in challenging conditions. The story of the heroic pilot will live on, and is getting louder, thanks to his neighbours, his colleagues from the Croatian Air Force and all aviation enthusiasts, who will wait to meet again, in Gornja Stubica and in Zadar!