Back to homepage »
Share:
Two autonomous underwater vehicles  – Remus 100 were received in October 2016 by the Mine Warfare Section of the Croatian Navy Flotilla The underwater countermine vehicles are used for searching the seabed, optimised to search large areas of shallow waters.Six members of the MCM […]

Two autonomous underwater vehicles  – Remus 100 were received in October 2016 by the Mine Warfare Section of the Croatian Navy Flotilla The underwater countermine vehicles are used for searching the seabed, optimised to search large areas of shallow waters.Six members of the MCM Diver Platoon have been trained to operate the vehicles, which they demonstrated during the recent practice event.

In mid-October 2016 the Croatian Navy received two autonomous Remus 100 vehicles, donated by the United States within the  Foreign Military Financing military assistance programme. The vehicles are intended for seabed search, and optimised to search large areas of shallow seas and require only scarse infrastructure in support. The state-of-the-art makes were manufactured in 2016 and equipped with sophisticated sensors and navigation that enable the detailed search;the vehichles are user-friendly and produce highly accurate data.

The vehicles have been assigned to the Mine Warfare Centre of the Croatian Navy’s Flotilla, and its Commander,.Commander (N) Damir Poklepović, and members of the MCM diver platoon – Lt Junior Grade Tino Mrčelić, chief petty officers Vatroslav Mlinar and Željko Stanković and Petty Officer First Class Žan Marsel Bušić described the system, the use and the operating modality of the vehicles for our magazine.  Commander Poklepović says the MCM  divers are the specialty trained to conduct the countermine search of the seabed and detect suspect objects using various sonar and scanners, and with the introduction of the Remus 100 vehicle their capabilities have been significantly enhanced  the unit’s detection and identification capabilities.
Immediately upon the handover by the Navy six operators of the Mine Warfare Centre took the training administered by an instructor from the manufacturing firm – Hydroid-Kongsberg.  The operators emphasised that they were familiar with the type of the vehicle, having undergone a training on the autonomous underwater vehicle IVER 2, in a cooperative pilot- project with the Faculty of Electronic Engineering and Computing. It facilitated the mastering of the procedures with the Remus 100. The instructor indeed commended the speed and the abilities of the Croatian operators to master the respective procedures, comprising the mission preparation, the preparation of the submersible and post-mission analysis of the acquired data. Following the completion of the second part of the training the operators will be able to perform basic maintenance to reduce the expenses. The Croatian Armed Forces are among ten militaries in the world to have introduced the Remus 100 vehicles and to have developed the respective operating capabilities. 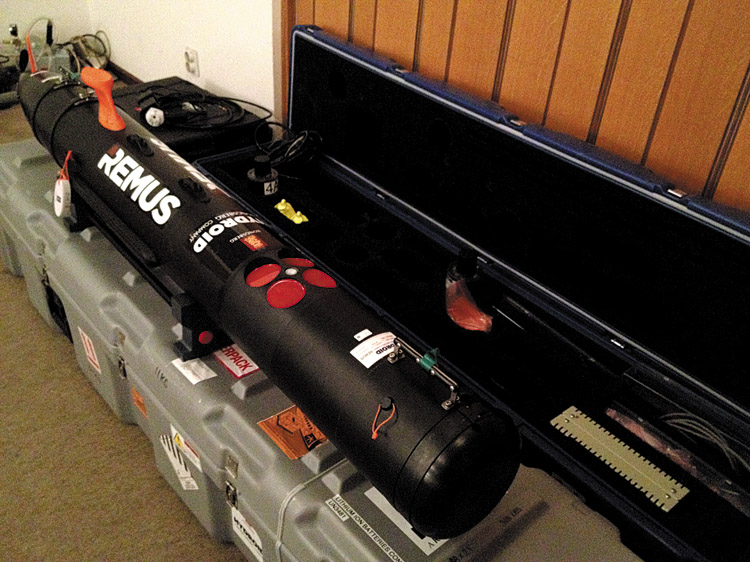 Given its operational capabilities the vehicle is used for search of shallow surfaces (up to 100 m, as indicated in the brand designation), which makes it optimal for the control of ports or access routes and also far more cost-effective than employing divers for the same purpose, in view of the speed and far larger range of search. For instance, what divers scan and search in a few days for the vehicle is a matter of hours. The vehicle’s operational autonomy (battery life) depends on a number of parameters, but in optimal conditions, depth and speed of operating amounts to eight hours, which is the time sufficient to search up to 800 m2. Its operation is programmed and controlled on a laptop, and following the immersion it scans the seabed according to the pre-set co-ordinates. The vehicle is equipped with various sensors (visibility sensor, temperature sensor, depth sensor) and the side scan sonar (SSS) which films the seabed and saves imagery to the hard disk, for later comparison and analysis. The vehicle can also contain a video camera, and the digitised recording is retrieved from the hard disk. The suspect objects can be accurately detected from the distance of a few meters. The collected and detected data are usedf to identify and classify the encountered objects; the suspect or explosive devices are neutrallised, which is a task for MCM divers. LTJG Mrčelić, the Commander of the MCM Divers Platoon, summarizes that detection-identification-classification and neutralisation are indeed the main procedures in operating the Remus vehicles and stresses that the camera installed on the vehicle facilitates the identification of the objects on the seabed. Petty Officer 3rd Class Bušić stresses that the operators also determine major maritime routes and corridors subject to constant monitoring, particularly the acccess routes to the ports (they are presently focussed on the maritime communications in front of the port of Split, the access through the Kaštela Bay and the entrance to the Lora Navy Port, and will follow the same procedure in other important Adriatic ports).The charts of the examined areas are saved and entered into databases to compare with in later searches. The assumed NATO commitments require periodical reviews of the access routes to the ports, also in order to prevent terrorist attacks. Hence the importance of the use of the REMUS vehicles for both military and civilian purposes, as they contribute to the safety of the navigable routes in the Adriatic for military and merchant fleets and of the safe undersea from the perspective of Croatia as a tourist country. What matters the most are the significantly upgraded the countermine capabilities of the Croatian Navy thanks to the introduction of the Remus 100 vehicles into operational use. Our  interlocutors who operate the vehicles described the progress by the following simile: “We ran in the Paris-Dhakar rally before, this now is Formula 1“.

Each vehicle is equipped with a REMUS Ranger. The vehicle incorporates an Emergency transponder, which can be alerted at any moment from the outer unit (installed aboard the ship, base or coast). The Ranger is independent from other vehicle’s systems and continues to operate regardless of the error, except for sinking. The REMUS Ranger is a small-sized water-resistant deck unit configured to enable control over the vehicle advancing during the underwater mission. The transponder is highly useful in emergency localisation and in the maintenance of the underwater vehicle. The vehicle is configured to take regular inputs from the external sources; if it does not receive them within the set time period (usually 10 min) the vehicle halts the mission and resurfaces.