Back to homepage »
Share:
The Croatian Navy marked its 26th anniversary at a ceremony held in Split on 18 September 2017. The main marking ceremony at Obala kneza Branimira was attended by the President of the Republic of Croatia as Supreme Commander of the Croatian Armed Forces Kolinda Grabar-Kitarović, […] 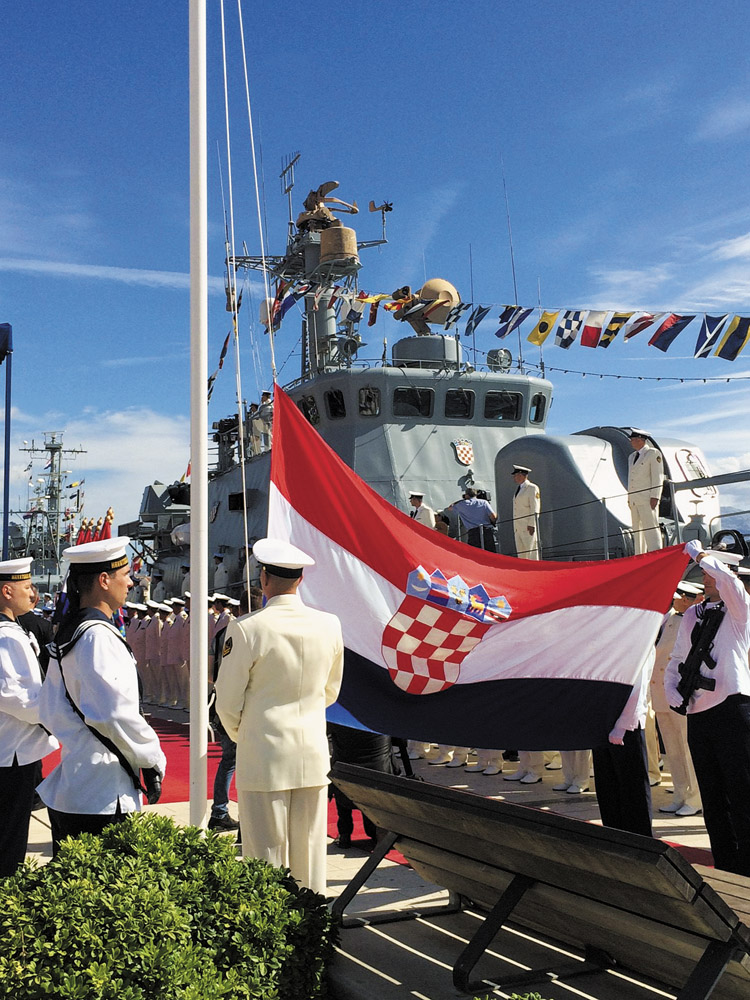 The Croatian Navy marked its 26th anniversary at a ceremony held in Split on 18 September 2017. The main marking ceremony at Obala kneza Branimira was attended by the President of the Republic of Croatia as Supreme Commander of the Croatian Armed Forces Kolinda Grabar-Kitarović, the Deputy Prime Minister and Defence Minister Damir Krstičević, the Chief of the General Staff  of the Croatian Armed Forces, General Mirko Šundov, the State Secretary of the Ministry of Defence Zdravko Jakop, the Deputy Chief of the General Staff, Lieutenant General Drago Matanović, the Director of the General Staff, Rear admiral Robert Hranj, tthe Commander of the Croatian Navy,  Rear admiral Predrag Stipanović, the Military Ordinary, Mons. Jure Bogdan, the Chief Defence Inspektor, Major General Slaven Zdilar, assistant ministers and service commanders, the representatives of the Split-Dalmatia County and of the Town of Split. The President of  Croatia  Kolinda Grabar-Kitarović extended congratulations to the members of the Croatian Navy and the appreciation to its members for the “decisive role defending the towns, coast and islands of Dalmatia during the Homeland War“. The Presidet also stated that the increaseed defence budget would enable the Croatian Navy continue upgrading its capabilities. The President praised the Navy’s engagement in the humanitarian missions in the Mediterranean. Continutinuous development of the required capabilities and modern vessels and equipment will enable the Croatian Navy efficiently protect the Republic. The Defence Damir Krstičević, forwarded the congratulations from Prime Minister  Plenković and expressed the appreciation to the members of the Croatian Armed Forces for the swift response and assistance and engagement in the sanitation of the flooded areas around the towns of Zadar and Ogulin. The Minister reminded of the return of military units to Sinj and soon to Vukovar, Varaždin and Ploče as well and stressed that the barracks in Ploče would help build new key capabilities of the Croatian Navy ( “I expect to see a respectable marine infantry unit of the Croatian Navy in Ploče, manned by young and well-trained soldiers, the crucial defence force of Croatia’s south“). The Minister also stated he expected expedited construction of the prototype inshore patrol vessel  and the launching of a warship after long time..given the need for new capabilities, and fpr a security system to enable a more efficient and adequate response to future challenges“.
The Chief of the General Staff of the Croatian Armed Forces, General Mirko Šundov in his address reminded of the establishment of the Croatian Navy, which demonstrated a highest  level of skills, combat preparedness and traineness in the conduct of maritime operations, which was decisive in the defence of the Adriatic Sea and coast. 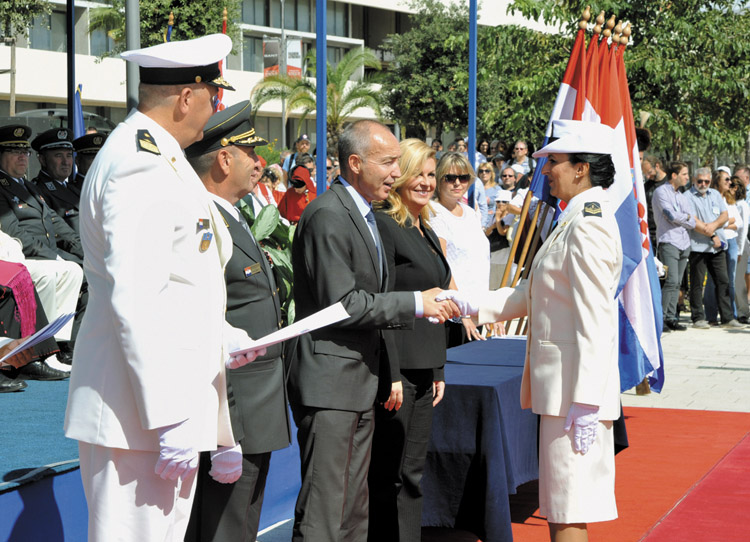 The Croatian Navy has adapted to the new tasks and requirements. “The members of the Croatian Navy proudly display the Croatian flag in the international operations, missions and exercises, as a trained and capable maritime force with the members of the allied and partner nations’ armed forces“.
The Croatian Navy Commander, Rear admiral  Predrag Stipanović, recalled  the earliest days of the Croatian Navy and the seizing of 30 naval vessels from the repair shipyard in Šibenik in September 1991. RAdm Stipanović underlined the contribution of the naval and landing forces to the Croatian Army operations during the Homeland War, particularly those whose valour and sacrifice are inextricably tied to the establishment of the Navy, and stressed the complex threats to the maritime security posing new challenges before the Croatian Navy. The warships’ entry intro operational service is necessary for efficient maritime protection. The Navy Commander also reminded of the continuous engagement of the Navy members in the UN-, NATO and the EU- peace operations, within the international forces in Afghanistan, Kuwait, the Western Sahara, Kosovo and off the coast of Libya. “We shall continue investing our knowledge and capabilities into the future of the Croatian Navy, at the service of our people and our homeland“.
The ceremony was concluded with the presentation of decorations, promotions and awards to the meriting members of the Navy.
On 17 September a mass for the fallen Croatian defenders was recited in the Split Cathedral (the Church of St. Domnius) and the Navy’s Orchestra and the Vocal Ensemble “Sveti Juraj”, held a concert at the Split waterfront.