Back to homepage »
Share:
The members of the Battalion “Tigrovi“ at the Training Range “Eugen Kvaternik“ near Slunj conducted the exercise “ Tigar 19“ aimed at assessing the trainedness of the members of the 2nd Mechanised Company for defensive operations 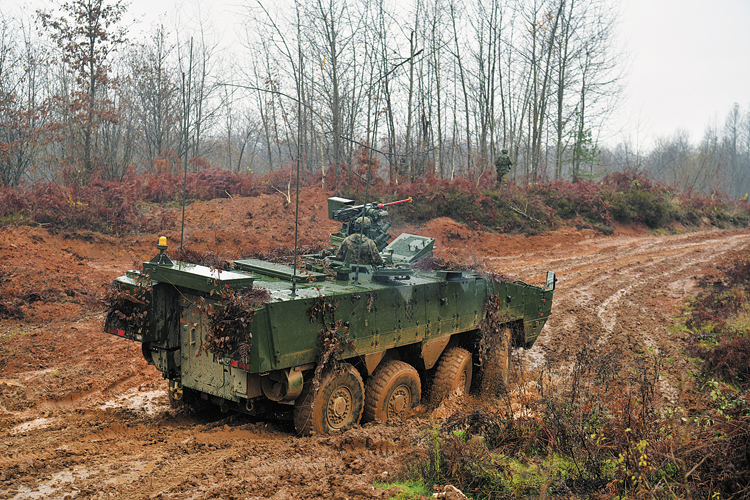 “Kicking off Tigar 19 exercise. Off we go!” – the Commander of the 2nd Company of the 1st Mechanised Battalion “Tigrovi“ of the Guards Mechanised Brigade, 1st Lieutenant Branimir Jašarević relays  the order via radio, and the Patria convoy heads towards the combat positions where they are awaiting an opponent attack.  The “Hrvatski vojnik“ Croatian Soldier team is aboard the command Patria vehicle, and the closing part of the Tigar 19 military exercise is underway in the Training Range “Eugen Kvaternik“ near Slunj.

The objective of the Exercise is to assess the trainedness and readiness of the members the Battalion “Tigrovi“ Commander Major Krešimir Kršinić that the training and qualification of members of the 2nd Mechanised Company in the implementation of tactics, techniques and procedures in defensive operations, and the exercise itself is part of the final preparations for the 1st Motorised Battalion “Tigrovi“ to enter the NRI standby phase (NATO Readiness Initiative), which begins as of 1 January 2020.

”The Exercise scenario is fictitious and features defence of a territory against the fictitious oponent, dubbed successfully by our colleagues of the  2nd Motorised Battalion “Pume“ of the Guards Mechanised Brigade,” says Major Kršinić. The evaluation was conducted by the staff of the Combat Training Centre, using the  MILES system, which enabled them to monitor the situation in the field in real-life conditions. All participants were equipped with devices  synchronised with the devices fittend into Patria vehicles, to enable tracking casualties.

”On Day 1 we seized the tactical engagement area – the last safe area before entering the operations area.  On Day 2 we planned to seize the basic combat positions, and on Day 3 we anticipated an attack of the Red Force on our area. The Exercise has engaged  three mechanised battalions and a support platoon, equipped with mortars and anti-armour weapons“:  1st Lt. Jašarević also accounted the course of events in the field.

“We are taking a particular encrypted route, and our conversation is encrypted too.  All members are equipped with the so-called codebook and each time the forces move we are operating according to the codebook.

As we go along the route, at one point we split into two elements – one element will seize the basic firing position and the other will head towards the operations area“. As the situation in the field evolved, the ome occupy basic firing positions, and we continue toward the area of ​​operation, ”says the 2nd Company commander. The Blue Force shifted positions as a function of the changing situation in the field. One should also highlight the demanding weather conditions in the Training Range.

“We are coping well with for and cold, the problem is  only the rain that has been falling for almost two weeks , on a very demanding terrain. Anyone who has been in this training after heavy rains knows it. The mud here aggravates the moving of the soldiers and of the Patria vehicles from one position to another, but the Company accepted it as a challenge.

“We are preparing for a life and operation in all terrains and weather conditions after all, from extremely cold to extremely hot environments”, says Major Kršinić. The members of the 2nd Mechanised Battalion were accompanied by other elements of the “Tigrovi“ Battalion (the Battalion Command, the logistic component, the recce component, the anti-armour component and the Fire Support Company (equipped with 120-mm mortars) as secondary training unit, who provided support to the Mechanised Company with their capabilities (fire support, reconnaissance etc.).

“Our focus after  the Exercise will be on upgrading  the elements in need of improvement, based on the suggestions from the staff of the Combat Training Centre as unbiased observers. An added value of the Exercise was the participation – a baptism of fire – of young members who only received their berets in early November, for whom it was an opportunity to acquire valuable experience and prove their skills in difficult terrain conditions  with the experienced colleagues.