Back to homepage »
Share:
The 2nd HRVCON to Enhanced Forward Presence from 9-15 February 2018 conducted a live-fire field exercise (Vulkan 18/1) at the Training Range "Eugen Kvaternik" near Slunj 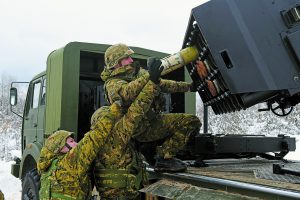 The 2nd HRVCON to Enhanced Forward Presence from 9-15 February 2018 conducted a live-fire field exercise (Vulkan 18/1)  at the Training Range “Eugen Kvaternik” near Slunj; the Exercise was a segment of the final Combat Readiness Evaluation in compliance with NATO criteria, closing the pre-deployment process prior to the engagement in  NATO’s Enhanced Forward Presence. The engagement of the 79-member 2nd HRVCON within  the U.S.-led  Battlegroup stationed at the Training Range “Bemowo Piskie“ in Poland is due in mid-April ; The Battlegroup is composed of members of the armed forces of Romania, the United Kingdom and Poland. The main force of the 2nd HRVCON are the members of the Artillery and Missile Battalion of the Guards Armoured Mechanised Brigade (GOMBR),  the Military Police team, the National Support Element and the staff personnel. The Contingent Commander , Captain Dario Bilješković of the Guards Armoured Brigade commended the commitment and motivation displayed by its members during the combat readiness evaluation and during the pre-deployment training. I am convinced that the 2nd HRVCON to EFP in Poland will fulfill all assigned tasks within the Battlegroup and duly represent the Croatian Armed Forces among our NATO partners”said Cpt Bilješković. Pvt Martina Horvat, a member of the Contingent said: “We underwent  high-level  training, whose standards were designed to make us do our utmost. The evaluation  and the training itself have been  a great experience for me. The Officer Scheduling the Exercise was  Brigadier General Denis Tretinjak, the Commander of the  Guards Armoured Mechanised Brigade, and the Exercise Director was Lieutenant Colonel Željko Marinov, the Head of S-3 of the Brigade. 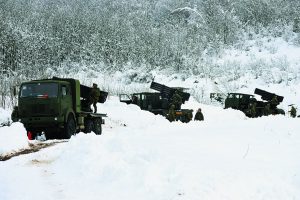 “The Exercise scenario is adapted to real-life situation of the engagement of the unit in the operation area. The participants have successfully used all capabilities they had practiced  during the basic and pre-deployment training  in harsh winter conditions; I have to stress also that the members of the 2nd  HRVCON have displayed commendable  enthusiasm, knowledge and professionalism both during the preparation and conduct of the Exercise-related activities and tasks“, said Lt. Col. Marinov after the Exercise. The final evaluation of the unit’s readiness was conducted by the Croatian Army Evaluator Team, headed by Lt. Col. Vice Olujić of the Croatian Army’s Training and Doctrine Command; the evaluation was conducted according to the CREVAL methodology and procedures. The Contingent has been evaluated “combat ready“. The head of the Monitor Team of the General Staff of the Croatian Armed Forces, Colonel  Mijo Kožić supervised the Evaluator Team’s application  of the ACO Force Standards , of the CREVAL methodology and procedures and of the relevant  national documents. Col. Kožić confirmed that  the Evaluator Team of the Croatian Army headed by Lt. Col. Vice Olujić and composed also of the members of the Support Command and the Military Police Regiment , conducted the evaluation procedures from the list duly and professionally, producing the respective documents to be submitted to the respective NATO commands.