Back to homepage »
Share:
The live-fire exercise Vulkan 18/2 was conducted within the final evaluation of combat readiness of the 3rd HRVCON to NATO's Enhanced Forward Presence in Poland 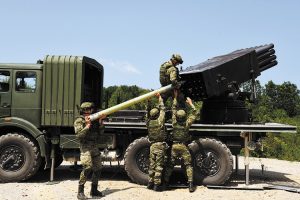 The live-fire exercise “Vulkan 18/2“, concluding the final evaluation of the 3rd HRVCON to NATO’s Enhanced Forward Presence in the Republic of Poland was conducted in the Training Range “Eugen Kvaternik” near Slunj on 25 July 2018, afte six months of training of all components, prior to taking the duty over from the 2nd Contingent (in the U.S.-led Battlegroup) in mid-October.

The Exercise engaged a MRL battery,  and was attended by Brigadier General Tihomir Kundid, the Commander of the Guards Mechanised Brigade, which mans the major part of the Contingent.“The Exercise “Vulkan 18/2“ is a national certification event for the 3rd HRVCON to NATO’s EFP mission in Poland, to provide contribution to security as a NATO nation. The Exercise demonstrated high level of readiness and trainedness of the Contingent personnel for operating MRLs, which are used in the EFP mission.

The final evaluation of the Contingent’s readiness was administered by the CREVAL Team of the Croatian Army Command, headed by Major Predrag Srđenović and  monitored by the Team of the General Staff of the Croatian Armed Forces  headed by Colonel Mijo Kožić. The evaluation was conducted in accordance with the valid ACO standards. The CREVAL system implies a 72- hour duration of the evaluation and of the Exercise, wth live-fire shooting with MRL “Vulkan“ as the main part.

“The shooting performed today is the top moment of the Exercise, and will be followed by final evaluation on the combat readiness of the unit based on the demonstrated abilities“, said Major Srđenović. 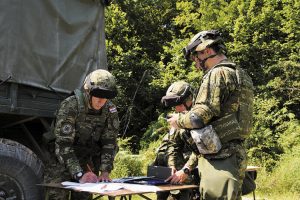 The main component – the MRL  Battery took part in last year’s live-fire exercise “Udar“ and in the Croatian Navy’s Exercise “Harpun“. The training lasted from March to early May, and from  May till the final evaluation. The third phase will be the deployment itself“, said Major Ante Lovrić, the Commander of the Artillery Rocket Battalion of the Guards Mechanised Brigade. The training comprised a general and a pre-deployment module, which contained the mision-specific training administered by the staff of the Ministry of Foreign and European Affairs, Ministry of Defence, of the General Staff of the Croatian Armed Forces, of the Croatian Army Command and of the Support Command and was followed by the unit-level training.

“We evaluated the squads and platoons in early and late May respectively. The evaluation of the Battery has been completed with the live-fire event, which was followed by a joint training of all components in the Training Range “Eugen Kvaternik“ near Slunj from 16 – 20 July“ said Major Lovrić . The 3rd HRVCON to EFP had an insight into the experience of the 1st HRVCON  and thus has the relevant information from the mission area.

The Director of “Vulkan 18/2“ Lieutenant Colonel Igor Gojmerac said that the Exercise crowned the 1-year preparations of the declared forces for the Enhanced Forward Presence in Poland and displayed the efforts by the Artillery-Rocket Battalion of the Guards Mechanised Brigade. “The Exercise scenario was designed to test all capabilities in accordance with the matrix required for the mission in Poland, and the Exercise also showcased the Brigade’s years-long efficient preparations and pre-deployment training and other activities of the declared forces to missions worldwide“.