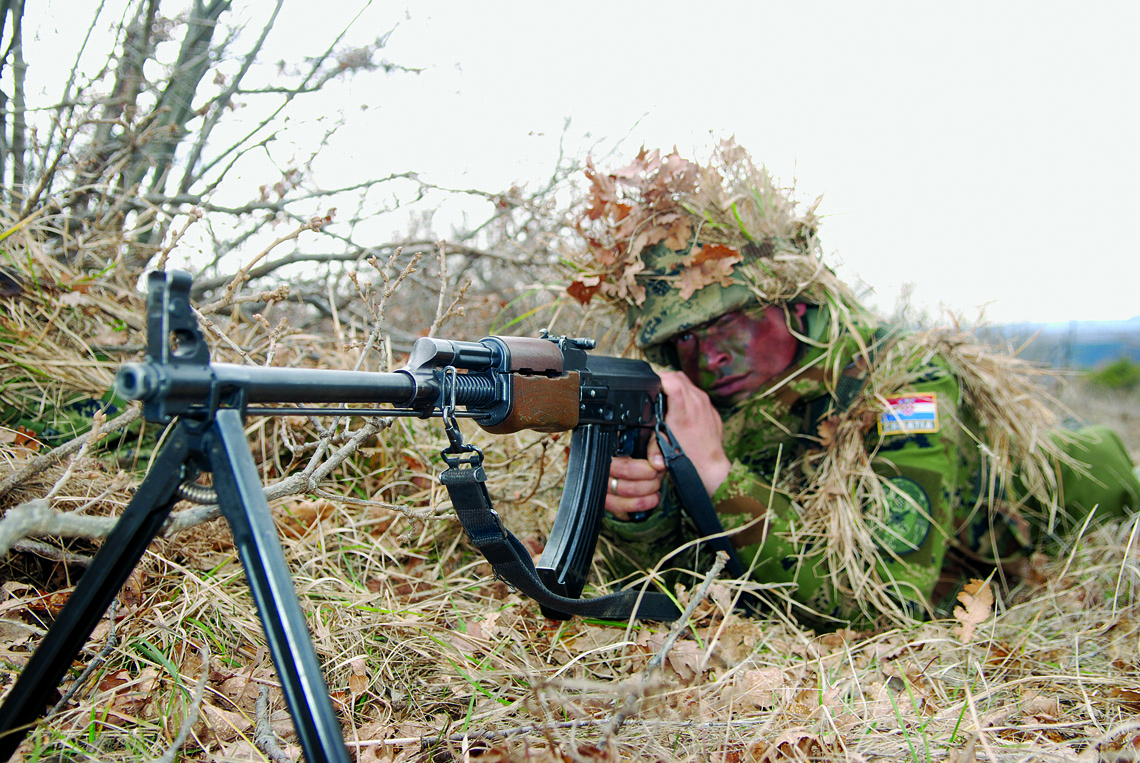 As planned for the latter half of 2016, the Guards Motorised Brigade is tasked with generating and training an augmented motorised company-sized force for the EUBG.  The Brigade has been assigned with preparation and training of the motorised company and staff officers for the EUBG 2016/II
As member of the European Union the Republic of Croatia contributes to the European Union Battle Group (EUBG). The Guards Motorised Brigade has been assigned with generating and  training an augmented company-sized unit.
The contingent comprises the motorised company, the general engineer support platoon (of the Engineer Regiment), the National Support Element (NSE) of the Support Command and staff personnel.  The Brigade is responsible for training and preparation of the Motorised Coy and the Croatian staff members of the EU BG 2016/II.  An encounter with the Vukovi during their field preparation proves their assiduity. The magazine’s team visited the members of the 1st Motorised Battalion (“Vukovi“- wolves) of the Guards Motorised Brigade during one of the two-week training cycles taken at the „Crvena zemlja“ Training Range near Knin in alteration with a week off and week in preparation for the next stage of training.
The cycle has been going on for months. The Commander of the 1st Motorised Battalion (“Vukovi“) of the Brigade, Major Igor Gojmerac summarised the preparations:“My unit has been tasked with preparing a segment of the contingent for the 2016 rotation. The Battalion commenced the preparations in June 2014, and in the course of the following months developed plans, documents, key personnel selection and the preparations timeline.
The training phase commnced in October, which at the moment has progressed to the squad level, and we are about to take the squad performance evaluation and pairs and teams live firing firing respectively.
Wintertime is very harsh in the Dinara mountain, with gusts of bora, sleet and low temperatures aggravating the conduct of tasks. However, “Vukovi“ adapt like their eponyms and stoically exercise the assigned tasks. This is not uncommon situation for soldiers. Day after day their satisfaction and confidence grow as they notice the progress and fulfilled goals.
The training will continue in accordance with the plans for eight coming months and the defined tasks timeline, levels and responsible units. The plan for 2015 features the platoon-level taining and evaluation, and the testing of procedures and SOPs by means of a new VBS2 at the Simulation Centre in the Croatian Defence Academy. The following step is self-evaluation of the Company in the Exercise conducted in the Crvena zemlja Training Range which offers diverse realistic conditions of operation.
The training will be concluded  by the UDAR 15 EXE in October 2015 and the final CREVAL.
The commander of the Company component of the EUBG, 1st Lieutenant Mario Štimac, describes the course of the training taken by the Company members: „The Company is presently in training at the squad level. We have completed the training and evaluation of individual tasks, prior to the training at the platoon and company levels. The goal is to successfully complete the exercise UDAR 15 in October. Then we shall take the training to follow the Company evaluation in multinational exercises jointly with the members of other EUBG contributing nations“.
As of October 2015,“Vukovi“ will take joint training with other components of the EUBG, prior to the inception of the 6-month stand-by period for deployments up to 6000 km from Brussels (July 2016).