Back to homepage »
Share:
The members of the 11th Croatian Contingent in Resolute Support underwent the final training and evaluation of their capabilities for the execution of their mission assignments at international military exercise Mir 19/2 at Training Area Crvena zemlja (Red Land). The contingent is set to be deployed to the NATO-led peace-support mission in Afghanistan in September 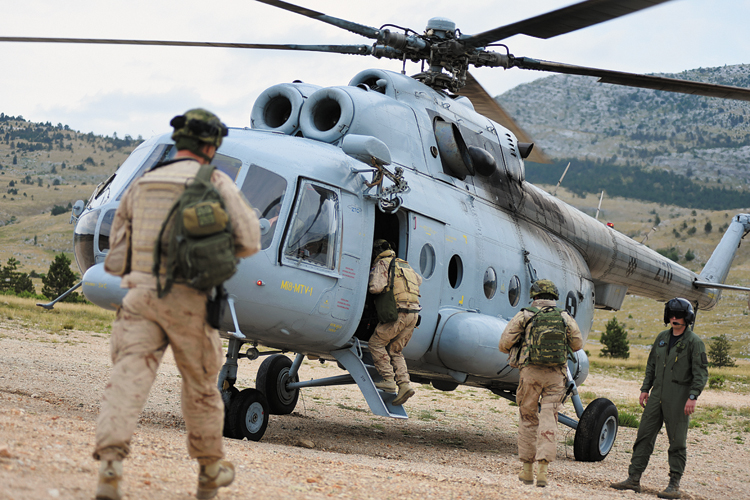 International military exercise Mir 19/2 was conducted at Training Area Crvena zemlja (Red Land) near Knin from 3rd to 12th July. During the exercise, 11th Croatian Contingent in Resolute Support, which is to be deployed to the NATO-led peace-support mission in Afghanistan in September, underwent the final training and evaluation of their operational capabilities.

Resolute Support is a non-combat mission, so that the training for it is comprised of non-combat, multinational stabilization tasks through which soldiers practise how to train, advise and assist the Afghan National Security Forces (ANSF) as well as protect allied forces.

The Commander of the 11th Croatian Contingent in Resolute Support Colonel Dragan Basić expressed his satisfaction over his subordinate soldiers’ high skill level, courage as well as physical and mental fitness: “The members of the contingent are highly motivated. I must underline that they are a close-knit team. During the training, soldiers who have previously served a tour of duty abroad pass their experience onto the contingent, which gives them a head start.” Colonel Basić concluded that the 11th Croatian Contingent in Resolute Support was prepared to successfully execute all tasks awaiting them in the area of operations.

Exercise Director Lieutenant Colonel Igor Gojmerac explained that the inspection and evaluation of the contingents’ readiness comprised four phases. The members of the contingent were acquainted with the state of affairs in the first phase, while the integration and training of all contingent’s components was conducted in the second phase. Evaluation followed in the third phase, while the post-operational analysis in the fourth phase concluded the exercise. “The exercise scenario simulates a real event that might occur in the area of operations. We drive the soldiers to the extreme so that we could evaluate their mission readiness,” said Lieutenant Colonel Gojmerac.

CROMIL’s team arrived at the training area just in time for field evaluation – an exercise in which the soldiers’ tactical skills and combat capabilities are tested and evaluated in practice, i.e. through events and incidents within the exercise scenario. The focus lay on testing the capabilities of the Force Protection Platoon, a task force made up of soldiers belonging to the Guards Armoured Mechanized Brigade. The Leader of the Force Protection Platoon First Lieutenant Tino Dolić explained the scenario to us: “What you have just witnessed is the departure of advisory teams that provide consulting services to the members of the Afghan National Army and others in the safe haven. They have just concluded their advisory tasks under the watchful eyes of Guardian Angels and returned to their camp by air.”

During our stay in the training area, we witnessed a simulation of the life and work in the safe haven, the provision of health care, a reaction to a complex attack on the safe haven and other situations that the Croatian soldiers might find themselves in during their tour of duty in Afghanistan.

Also present at the scene was an evaluation team comprised of Evaluation Director Colonel Davor Fanton of the Training and Doctrine Command, the Head of the Croatian Army’s Evaluation Team Major Goran Grabić and the Head of the Special Forces’ Command Evaluation Team Major Darko Tomac. The three of them had been entrusted with a responsible task. They had to evaluate all of the contingents’ components and individuals in simulated real-life situations and confirm that they were fully prepared for a difficult, sensitive mission in a high-risk area.

“When compared with the evaluation at exercise Mir 19/1, the novelty here is that an evaluation team from the Armed Forces of Montenegro is evaluating Montenegrin soldiers for the Resolute Support Mission, with support from the evaluators of the Croatian Armed Forces. Also, a completely new component is being evaluated today: The Balkh Force Protection Air Wing. As has always been the case, the evaluation is conducted in two phases: in the barracks and in the field,” explained Colonel Fanton.

The NATO Combat Readiness Evaluation (CREVAL) tool served as the standard for evaluation methodology at exercise Mir 19/2. Grade sheets were designed in conformity with each contingent member’s capability matrix and job description, i.e. they were adapted to the structure of the contingent, which is an independent unit and thus different from other units that are normally subject to evaluation in conformity with CREVAL. In other words, the tool used in the exercise is an original Croatian product interoperable with CREVAL.