Back to homepage »
Share:
On the third day, covered by the Hrvatski vojnik team, the Exercise was continued despite the hostile weather conditions. The Commander of the “Vukovar” missile boat which hosted us for the Exercise, Lieutenant (N) Nikola Kuvačić, stressed that all planned surface firing activities had been […]

On the third day, covered by the Hrvatski vojnik team, the Exercise was continued despite the hostile weather conditions. The Commander of the “Vukovar” missile boat which hosted us for the Exercise, Lieutenant (N) Nikola Kuvačić, stressed that all planned surface firing activities had been fulfilled, except the engaging of the target “Rukavac“, due to the poor visibility and heavy rain.

The anti-ship RBS-15 missle firing from the missile boat “Dubrovnik” was successfully performed, as was also the artillery engaging of surface and aerial targets from the “Vukovar” and “Šibenik” missile boats.

The Deputy Chief of the General Staff congratulated on the successful firing: he underlined that “Harpun 16“ was an inter-service exercise with the Croatian Navy as the main authority, who competently co-ordinated the performance of all Exercise participants.

“All Exercise objectives have been fulfilled. We have today seen the most interesting segment of the Exercise – the engagement of surface and aerial targets; the firing of the RBS 15 demonstrated the Croatian Armed Forces capability to operate from all Navy platforms and RBS launch platforms, which is a significant step forward in the Croatian Armed Forces capabilities“.

Rear admiral Predrag Stipanović expressed satisfaction with the performance and congratulated the participants as the Navy commander. “The Croatian Navy has displayed its capabilities again today; the firing from the missile boat “Dubrovnik” has demonstrated all naval RBS operating units to be capable of successfully completing the task.

The RBS-15 missile firing and the successfully engaged target, as well as the artillery engagement of surface and aerial targets proved the Croatian Navy members to be knowledgeable and trained of operating the systems and the equipment in the operational service”. 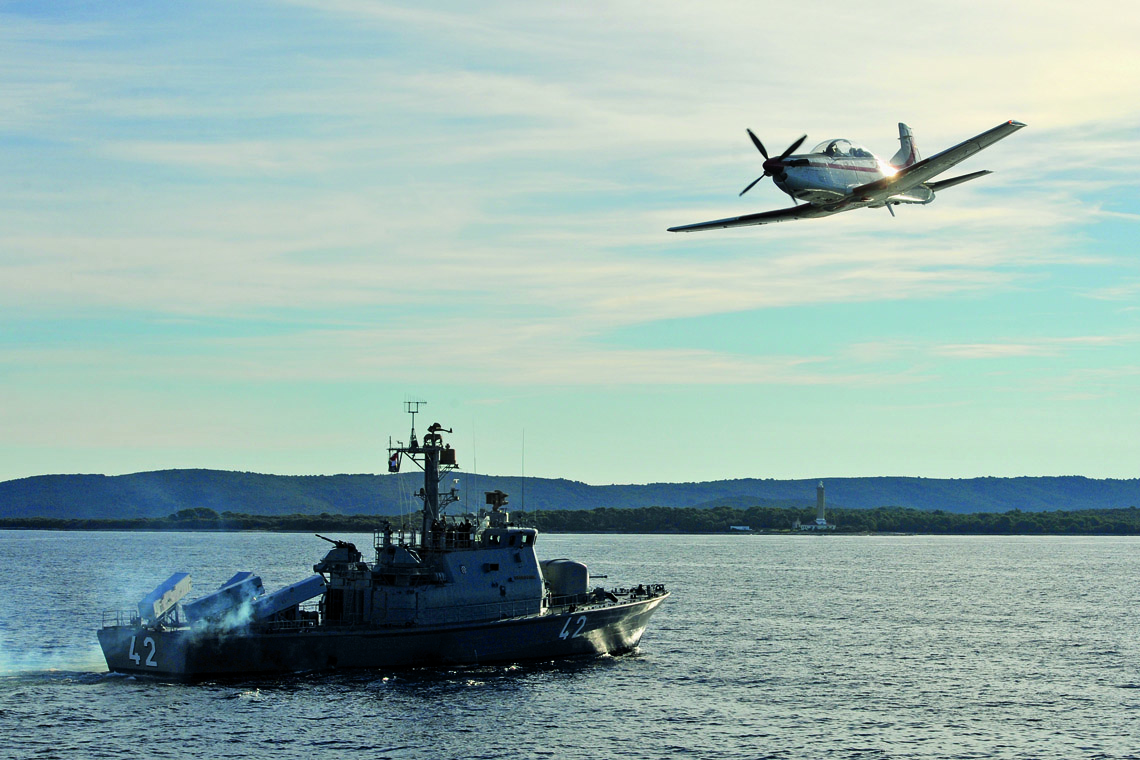 The Exercise Director – Captain (N) Milan Blažević said that the firing was successfully completed and that the Exercise extended into the following three days at the Žirje Training Range and the Zečevo Base. ”HARPUN” will be continued into 2017, possibly as an international activity, as it is open to NATO forces.

The Commander of the Croatian Navy Flotilla, Captain (N) Damir Dojkić shared the impression.   “The Exercise Harpun 16, engaging the entirety of the Navy forces, reinforced with the elements from other Croatian Armed Forces units and featuring the most complex naval warfare elements,  has been successfully completed, and as the Commander of the Navy Flotilla I am expressing my pride over the performance of its members and of the vessels crews“.

The training activities – the seaborne and airborne attacks by the forces of the Special Forces Command, the MEDEVAC and force exfiltration- were conducted at the Žirje Training Range and the Zečevo Base in the following three days

The third part of the Exercise commenced with the repositioning of the vessels from the Dugi otok to the aquatoria of Žirje, Rogoznica and Primošten and of the Army forces into the Zečevo Base and the Lora Navy Port and the insertion of long-range reconnaissance team into the island of Žirje and was focussed on the conduct of a co-ordinated seaborne and airborne attack on the south part of the island.

It was followed by an airborne attack by the unit of the Special Forces Command and a concurrent seaborne attack by landing crafts assault, with the aerial support from the unit of the Croatian Air Force and Air Defence, simulating air strikes against high value targets. The simultaneity was enabled by co-ordination and trainedness of the forces in the field and the Joint Operations Command. The training activities were concluded with helicopter MEDEVAC and the force extraction.

Importantly, the Exercise was the occasion for the Navy forces to introduce the Remus 100 autonomous vehicles into operational use for underwater counter-mine mapping of the disembarkation area. The vehicles significantly enhance the Croatian Navy’s countermine capabilities.

The Exercise Command was ground-based for the first time – at the coast surveillance post “Dugi otok“ (during the first part of the exercise and in the Zečevo Base in the second part of the exercise respectively. The management of the Exercise from the ground was made possible by a comprehensive maritime situational awareness. The data from various sensors were integrated in a digital imagery in real time and transmitted to the Command, developing the  normal operating conditions for the Exercise Control Centre.

Recreating a fictional scenario which comprised a military conflict between two mock island countries in the central Adriatic resulting in a military intervention and the engagement of joint task forces to liberate the temporarily occupied territory, the Exercise has in its entirety confirmed the high level of trainedness and joint operation capability of the Croatian Armed Forces.