Back to homepage »
Share:
From 8-12 January the members of the Guards Armoured Mechanised Brigade of the Croatian Army and of the Croatian Air Force and Air Defence conducted a joint unit-level demonstration exercise 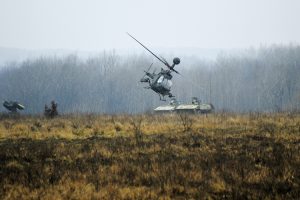 From 8-12 January the members of the Guards Armoured Mechanised Brigade of the Croatian Army and of the Croatian Air Force and Air Defence conducted a joint unit-level  demonstration exercise “Integration of combat functions in a manoeuvre company attack“ in the “Gašinci“ Training Range; the 2nd level self-evaluation by the members of the 2nd HRVCON to NATO Enhanced Forward Presence, as part of the U.S.-led Battlegroup. The Exercise was attended by  the Chief of Staff of the Croatian Air Force and Air Defence, Colonel Michael Križanec, the Chief of Staff of the Guards Armoured Mechanised Brigade, Colonel Dragan Pondeljak and Major Sean Spencer of the U.S. Army as observer, alongside the participating units’ commanders. The purpose of the Exercise was to review overall capabilities of the key personnel with respect to the troop leading procedure and integration of combat functions during the planning and conduct of mission, and to present and launch a new model of integrated training. The role playing forces comprised a company team (two tank platoons, one mechanised platoon and one anti-armour platoon), an air defence platoon, a MRL battery, an engineer (pioneer) platoon, a logistic company, a Kiowa helicopter team and a squad of the Military Intelligence Company.  The reconnaissance elements of the land forces, the  OH-58D Kiowa Warrior helicopters kicked off the exercise with intelligence support, collecting data from the area of operations through digital battlefield.  Having received the data, the Company team conducted tactical movement and seized the camouflaged positions. The support to the tank platoon to prepare  for the attack approved, two Kiowa helicopters and the MRL battery opened fire at the enemy’s forward manoeuvre elements and enabled the forces to continue the attack. The enemy tank forces destroyed, the helicopter crews assumed the position which ensured constant contact with the enemy with minimal exposure to possible threats. As the manoeuvre component came across mine obstacles during the breakthrough, the immediate fire support created the smoke screen, to enable the enigneers clear the passage; one soldier from the combat vehicle “wounded“in the action was asisted by the combat life saver and taken to hospital. Further on, a AMV was destroyed in the minefield and removed from the site with a low loader trailer after the successful seizing of the enemy facility.

The Kiowa Warrior helicopters performed the low-flying attack and engaged the targets with  the machine guns; the pilots demonstrated the aggressive and speedy attacks prevented the enemy forces’ consolidation during the attack conducted by the manoeuvre forces. The Exercise showcased the joint and integrated operation of aerial and land forces in an attack manoeuvre, with additional practice of recconaissance, artillery fire correction, securing an area and close air support. The intelligence support and recce provided by Kiowa helicopters reinforced the manoeuvre, fire support and command and control; the armoured units were provided with a better view of the situation in the battlefield, their range and efficiency was enhanced, and the aerial fire support and implying major security  and minimising surprises. Integration of helicopters into land operations provides additional fire support to the infantry  without engaging a certified joint terminal attack controller (JTAC), a certified serviceman who directs the operation of aircraft in close air support and other operations. The pilots used natural and artificial obstacles for camouflage against the enemy forces and take the favourable position.  The most surprising facet was the sound effect of the armoured forces, which masked the noise of the helicopters approaching the enemy (and the observers) at distances much closer than in the real world. 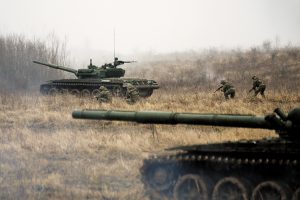 The helicopter crews contact with the enemy by means of sensor in the above the rotor Mast Mounted Sight; they also performed field reconnaissance and confirmed the information on enemy forces disposition obtained from the ground scouts. The Exercise was the first engagement the OH-58D Kiowa Warrior helicopters of the 93rd Air Base of the Croatian Air Force and Air Defence in support to the land forces in the area of operations, with the focus placed on the practice of interoperability of joint forces in a combat environment. The joint exercise recalled the structure of the 1st Croatian Guards Division during the Homeland War comprised infantry, armoured component and helicopters, and it also corresponds to the features of the modern-day battlefields. It also demonstrated the constantly increasing capabilities of the Croatian Armed Forces.