The Fighter Aircraft Squadron of the 91st Air Base of the Croatian Air Force and Air Defence has two new test pilots. Two experienced members of the Squadron – Major Christian Jagodić, Deputy Commander of Fighter Aircraft Squadron and Major Zvonimir Milatović, Commander of the 1st Air Platoon – in early August acquired  supplemental qualification as MIG 21 aircraft test pilots. Both pilots belong to the 3rd generation of pilots trained in Croatia. Having graduated from the aeronautical department in 1999 Major Jagodić and Major Milatović joined the Croatian Armed Forces as PC-9 Pilatus pilots and subsequently instructors. In 2002 they were in the second generation to undergo the endorsement training for MiG-21 in Croatia.

They meanwhile followed further education and training in the United States. The supplemental qualification is the pinnacle of their fighter pilot careers.  Their task consists in testing the aircraft within the delineated zone of test flying in the airspace which is barred to other aircraft, enabling the pilots freely manouvre the aircraft and perform other required procedures and land timely in the event of an emergency, as the zone is close to the aiport.

No training programmes for test pilots have been available in a while. “The Squadron  was established in 2009, and we had no test pilots for figher aircraft for a decade; the Squadron faced attrition as some pilots left for medical reasons, others were retired and only Colonel Ivan Selak remained in service. The intent was to man the Squadron with young pilots and to organise a complete training course within it“, says Major Jagodić.

Although there will be formal requirements to meet to take the training for test pilots, the experience, knowledge and precision count as well.

“It takes at least 300 flying hours on MiG and a recommandation from the Squadron’s Commander. In performing test flights experience is mandatory, as well as high precision and flying skill, combined with the flying discipline and strict adherence to the rules“, says Major Milatović, “which is why it is important that genuinely motivated individuals reach the training“. 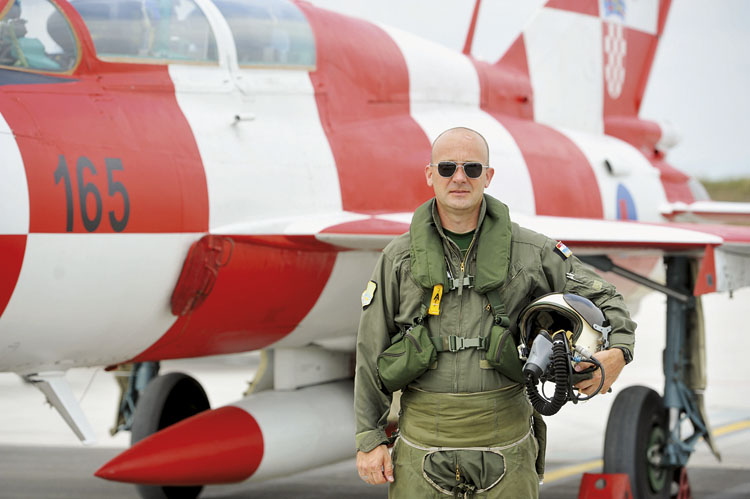 The pilots’ role is to test the functioning of the aircraft and the condition of its various systems. “Repair works on the aircraft have to be complemented with a test flight to determine the in-flight functionality. The aircraft undergoes practice runs on the test bench, followed by the test flights, in the interest of the safety of the flight crews of the Squadron. ”There is always a risk of minor flaws during the works to be responded to with precision, discipline and mastery of in-flight emergency procedures. During the test flight the aircraft is operated to the limits to try its systems at maximum altitude and speed. Each aircraft is closely monitored and the performance details are entered the in the performance records.

The record of previous flights and engine parametres are considered closely prior to every flight to spot possible deviations. The new test pilots stress that it is highly important to take notice of the remarks from the ground personnel. The aircraft testing is a slow and gradual process to obtain accurate data critical for correction of the flaw.

Major Jagodić described the test pilot training:“ We initially took a week-long in-class theory training, which is a standard thing for the pilots but it included more details analysed and greater focus on certain systems which are more critical. We focussed on emergencies and the procedures that the pilots have to master up to the level of automatism to be able to respond timely and prevent major damage or potential threat.

In the event of the engine stopping during the flight, which is very dangerous for MiGs, it is the pilot’s job to restore the aircraft airworthiness and to land, to avoid ejection“, says Major Jagodić. The theory training is partly administered by the aeronautical technical experts for the second level maintenance. It is followed by an exam in regular and emergency procedures and the flight training respectively, which is focussed on the manoeuvres and procedures, the specificities of individual systems and the logging details. The second theoretical module and the entire practical and flight training is administered by Colonel Selak.

The practical segment of the training consists in demonstrating the correct way of testing a specific system in the aircraft itself, and the previous maintenance or repair works done on the aircraft dictate the test flight. It comprises five flights during which the instructor demonstrates the specificities and in the sixth – the test flight – the trainee is expected to demonstrate his ability and autonomous performance of the procedures. The pilots have to log every procedure taken during the flight, which they practice on an airworthy aircraft to get a complete insight”, underlines Major Jagodić.

In conclusion, the job of test pilots is stressful and requires composure. “Some situations call for quick response while others want you to slow down. Composure and calmness are paramount, most important as you have to act quickly yet calmly “. On top of it is motivation. Motivation is the key requirement for a pilot, who is expected to take constant learning and extra work. But pilots find both challenge and pleasure in that. Finally, Maj. Jagodić and Maj. Milatović affirmed that they recognised potential test pilots among their colleagues. “Whenever we receive a new group of pilots, it is our honour to lead him to perfection. It is every instructor’s goal to help his trainee outperform him”.