Back to homepage »
Share:
The flight training on the OH-58D Kiowa Warrior helicopters kicked off in the Helicopter Squadron of the 93rd Air Base of the Croatian Air Force and Air Defence Barracks “Pukovnik Mirko Vukušić“at Zemunik in early May 2017. The training for the Croatian pilots is administered […]

The flight training on the OH-58D Kiowa Warrior helicopters kicked off in the Helicopter Squadron of the 93rd Air Base of the Croatian Air Force and Air Defence Barracks “Pukovnik Mirko Vukušić“at Zemunik in early May 2017. The training for the Croatian pilots is administered by the U.S. flight instructors and air maintenance technicians, on the 16 OH-58D Kiowa Warriors within the project of equipment of the Croatian Armed Forces, supported by the U.S. The first group of the Croatian Air Force and Air Force pilots is taking the initial training cycle, to prepare and receive certification to autonomously train other pilots. The training for air technicians will follow the same principle.

The Commander of the Helicopter Squadron, Lieutenant Colonel Krešimir Ražov said that the Kiowa training for pilots has introduced a new mission and role of the “The project is a challenge – we are being trained to operate new modern technology and to apply modern techniques and tactics. We cherished the idea of mastering the use of the state-of-the-art equipment incorporated in armed reconnaissance helicopters; we became pilots because of such things in the first place. Learning to fly the helicopters with such a broad range of operational capabilities is a major moment for our pilots and Squadron alike; the Kiowas are the best reconnaissance and real-time data collection and transfer helicopters. They will probably also see employment in civilian search-and-rescue missions at land and sea or in the border control in day/night and in any weather conditions. We are therefore taking pride to become Kiowa helicopter pilots; not only we advance our training – we are also developing and acquiring new capabilities for the Croatian Armed Forces”, says Lt. Col. Ražov. 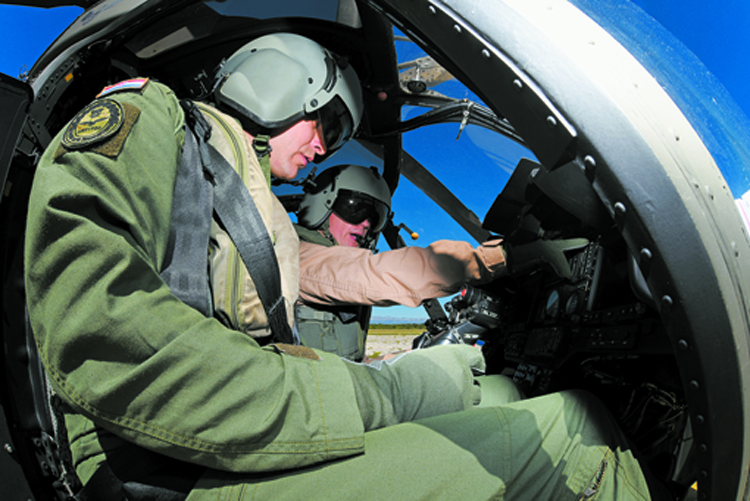 The training or pilots was preceded by the training in the Kiowa engine maintenance and inspection for air technicians, who had already passed the examinations in the basic module, including the line maintenance (technical specifications, documentation, systems, fault correction etc.). The basic module has been completed so far by the technicians specialised in aircraft engine and radio electronics/avionics (covering the flight instruments, radio and electronic equipment and armament); the technicians will still receive the instruction in maintaining the M250-C30R Turboshaft engine by the Rolls-Royce experts. The chief aircraft engineer of the 93rd Air Base, Lt. Col. Marin Žunić said the training of air technicians was facilitated by their existing expertise with the maintenance of similar helicopters – the Bells 206B. “The American teams praised the level of expertise and practical skills of our air technicians and adapted the training programme accordingly, leaving out the already acquired content. It applies primarily to the technicians specialised for aircraft engine, while the radio electronics and avionics technicians need to acquire practical experience as Bell helicopters do not have the equipment. Also, the upcoming lectures and guidance of the visiting experts from Rolls-Royce, which manufactures the engines for the Kiowa helicopters, will be very useful and relevant for us. We will have the privilege of learning from the best instructors and experts in all aspects of the maintenance of OH -58D Kiowa Warrior. The OH-58D Kiowa Warrior Helicopters are armed reconnaissance helicopters, employed in anti-tank warfare, close and very close air support, convoy escort, correction and adjustment of precision fire as well as aerial command and control with the aid of digital modems and protected channels. They also used for civilian purposes, e.g. search actions, border control, disaster relief and observation and filming of incidents. Given the superior manoeuvering capabilities, resistance to detection and counterattack by the adversary, the night/day operability, high adaptability to tasks and various operating conditions and the dual use capacity (the support to civilian institutions), the introduction of the OH-58D Kiowa Warrior helicopters has significantly enhanced the capabilities of the Croatian Armed Forces.

The first group of the Croatian Air Force and Air Force pilots is taking the initial training to prepare and receive certification to autonomously train other pilots. The training for air technicians will follow the same principle