Back to homepage »
Share:
Five OH-58D Kiowa Warrior helicopters from the project of equipment of the Croatian Armed Forces with scout/attack helicopter, supported by the U.S. government and the U.S. Army, have been presented in the 93 Air Base at Zemunik on 10 August.  The presentation was attended by […]

Five OH-58D Kiowa Warrior helicopters from the project of equipment of the Croatian Armed Forces with scout/attack helicopter, supported by the U.S. government and the U.S. Army, have been presented in the 93 Air Base at Zemunik on 10 August.

The presentation was attended by the President of the Republic as the Supreme Commander of the Croatian Armed Forces Kolinda Grabar-Kitarović, the U.S Ambassador to the Republic of Croatia, H.E. Julieta Valls-Noyes, the Croatian Defence Minister Josip Buljević, the Deputy Defence Minister Tomislav Ivić, the Director of the Military Security Agency, Brigadier General Ivica Kinder, Assistant Ministers Nikola Brzica, Zoran Piličić and Zdravko Jakop,  the Chief of the General Staff of the Croatian Armed Forces, General Mirko Šundov, the Commander of the Croatian Air Force and AIr Defence, Brigadier General Miroslav Kovač and Colonel Karol Lučan, the Commander of the 93rd Air Base, which will house the helicopters, to be assigned to the Helicopter Squadron.

The introductory presentation was delivered by Colonel Davor Tretinjak, the Head of the Project Team and the Chief of the Staff of the 93rd Air Base, who briefed the invitees on the overall project comprising the  selection, transportation, reception and introduction of helicopters into operational service, as well as on their specifications and the utility for the Croatian Air Force and Air Defence. 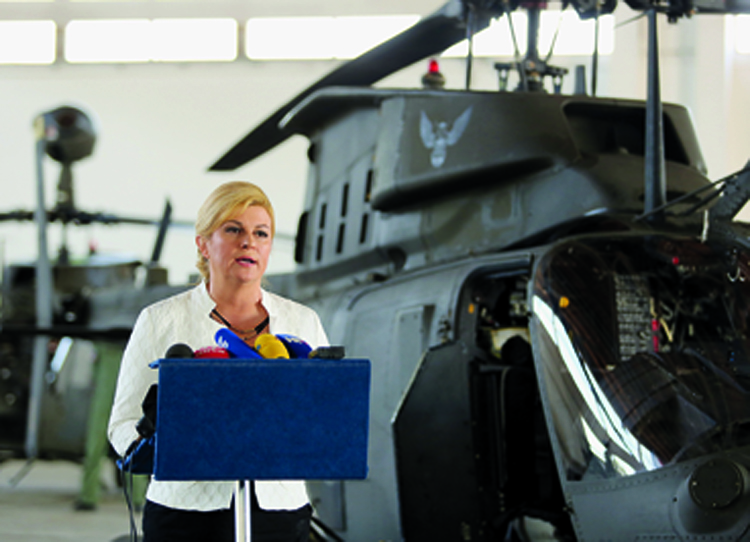 The first five helicopters, three simulators, the weapons and other respective equipment were delivered to the base at Zemunik  in late July aboard a U.S. C-5, whereas the remaining 11 and the equipment are due in a later air delivery via the same route Alabama –the Zemunik Air Base.

The Kiowa Warrior helicopters were manufactured in the period 2010 – 2012 and subsequently entered the operational service (from 2012 – 2015). They are taken over inclusive with the standard weapons set, the optical boresight system, the communication and navigation equipment  and the respective live ammunition (12.7 mm, the Hydra non-guided missiles and the Hellfire 114-AGM missiles.

The primary purpose of the OH-58D Kiowa Warrior helicopters is connected with reconnaissance and attack capabilities. In combat situations it is used for anti-armour fighting, close air support and immediate air support; convoy escort and protection, correction and  guidance of artillery precision fire and urban operations. The helicopters provide target acquisition and designation under day and night conditions as well as superior manoeuvering and fire capabilities and survivability. The Defence Minister Josip Buljević took the opportunity to extend appreciation to the U.S. government – the main Croatian ally in defence and seucirty and its strategic partner for the donation, which continued the years-long bilateral co-operation.

“The Kiowa Warrior helicopters provide the Croatian Armed Forces with new defence capabilities. The members of the Croatian Air Force and AIr Defence – pilots and technicians – received receiving modern assets to motivate them for new moves, expanded knowledge and skills and new experiences. The introduction of the helicopters also demonstrate our determination to complete the process of the replacement of the Soviet-produced equipment with modern western-made assets. The Kiowa helicopters flown by the Croatian Air Force and Air Defence will constitute a new value in the response to the modern security threats, and a new tool in the enhancement of the security architecture.

The helicopters, introduced into the Croatian Armed Forces, make just a segment of the strong support and assistance received by the Republic of Croatia and its military from their strategic partner. The overall assistance provided by the U.S. through various programmes totalled hundreds of millions of USD. The Minister also expressed confidence in continued development of the bilateral cooperation of the two countries and their armed forces to mutual benefit“, stated Minister Buljević

The U.S. Ambassador stressed that the modernisation of the Croatian helicopter fleed was a goal for the Croatia and the U.S. alike, and that that the broad spectrum of civil-military tasks enabled by the helicopters will expand the Croatian military capabilities, particularly in peace support missions. The Ambassador also stated that the Republic of Croatia was a credible and responsible U.S.’s partner and Ally in southeast Europe and a model to other countries for the building and contribution to common security environment.

President  Kolinda Grabar-Kitarović underscored that the equipment of the Croatian Air Force and Air Defence with Kiowa Warrior helicopters was conducted with the assistance from the U.S. – Croatia’s strategic ally, and that it reflected the confidence of the U.S. into the Croatian defence capabilities and potential. The President stated that the helicopters will upgrade the Croatian Armed Forces’ combat readiness, nd that their primary purpose lied in the protection of the sovereignty and security of the Republic of Croatia and in providing support to the allied efforts in the ongoing and future missions.

The President emhasised that the security environment called for increased investment into the acquisition of modern systems (the Kiowa helicopters being a first step) and announced the continued equipment with western-produced transport helicopters. The President extended commendationss to the entire team of the Ministry of Defence and of the Croatian Armed Forces included in the project and the appreciation to the United States for the support and friendship particularly visible in defence and securityThe project of introduction of the OH-58D Kiowa Warrior helicopters into the operational service entails the equipment of the Croatian Air Force with 16 OH-58D Kiowa Warrior helicopters, the overall training for pilots and technicians and the establishment of the logistic system of attendance and user maintenance, to provide new scout/attack helicopter capability.

To fulfill overall contractual obligations (totalling 34.8 million USD) a portion of the funds in the amount of 20.1 million USD will be provided rom the U.S. assistance, and the remaining part (14.7 mil USD) from the Ministry of Defence’s budget respectively. Along with these, the Croatian Ministry will have to cover the VAT in the amount of 90 mil kuna.  The precise purchase price for 16 new helicopters ( the “flyaway cost“ of a helicopter totals 13 mil USD)  and three simulators  amounts to over 220 mil USD (cca 1.5  billion kuna).