Back to homepage »
Share:
“The Croatian Navy is the main agent of Croatia’s security in the Adriatic as well as the guardian of Croatia’s interests in the Mediterranean,” said Minister Damir Krstičević, stressing that significant efforts were being chanelled into the modernization of the Croatian Navy so that it could keep up with contemporary security trends…

On 20th September 2019, the south Croatian city of Dubrovnik hosted the central ceremony marking the 28th anniversary of the Croatian Navy’s establishment as well as the homecoming of the 2nd Croatian Contingent in Sea Guardian, NATO’s operation in the Mediterranean.

A reveille performed by the Croatian Navy Band echoed through Stradun, the main street in Dubrovnik, thus announcing a formal line-up of Croatian sailors in the historic part of the town before the continuation of the ceremony in the Marin Držić Theatre.

“Strategic weapons in the Adriatic Sea will have been provided for following an overhaul and procurement of engines for two gun-missile boats in 2020,” emphasized Minister Krstičević, announcing that an agreement concerning the procurement of a second coastal patrol vessel was in the works. Minister Krstičević reminded that the Ministry of Defence and the Ministry of the Sea, Transport and Infrastructure had signed the Agreement on recognizing sea service on the Croatian Navy’s warships and the Croatian Coast Guard’s vessels and obtaining qualifications in the marine sector, owing to which Croatian sailors are entitled to the same benefits as civil servants. Speaking of augmenting the Croatian Coast Guard’s capabilities and developing the Croatian Armed Forces, Minister Krstičević put a particular emphasis on last year’s launch of Military Naval Studies, a study programme educating future officers of the Croatian Navy. He also extended special congratulations to sailors who had honourably served in peacekeeping operation Sea Guardian aboard the RTOP-42 Dubrovnik gun-missile boat.

Stressing that the Croatian Navy was the main agent of Croatia’s security in the Adriatic as well as the guardian of Croatia’s interests in the Mediterranean, Minister Krstičević pointed out that the current government had recognized the strategic importance of building up the Croatian Navy; therefore, efforts were being chanelled into improving the living and working conditions for Croatian sailors as well as creating conditions for the successful execution of the sailors’ tasks.

“We have many activities awaiting us in 2020, the most important of which is holding the presidency of the Council of the European Union. As far as the navy is concerned, one of the most significant events will be the Coast Guards’ Forum, hosted by none other than the Croatian Navy. I am convinced that all these activities will provide us with an opportunity to connect more strongly with our partners and allies as well as enhance the protection of the Adriatic Sea. Those are just some of the activities that Croatian soldiers are engaged on. Their work is of immeasurable importance for the Croatian people, who recognize and value it,” concluded Minister Krstičević.

Zrinko Petener and Mato Franković extended good wishes on behalf of the president of the Republic of Croatia and the speaker of the Croatian Parliament, respectively. Both men emphasized the Croatian Navy’s great historical legacy, its centuries-old tradition and its indispensable role in the defence and liberation of the Croatian south in the Homeland War, but also highlighted the importance of investing into human and material resources so as to increase the level of security in the Adriatic and contribute to international safety at sea.

On the occasion of Croatian Navy Day, the Chief of the General Staff of the Croatian Armed Forces Gen. Mirko Šundov paid respects to all fallen, deceased and missing Homeland War veterans while thanking all former commanders of the Croatian Navy for contributing to the development of the branch with their work, enthusiasm and patriotism. 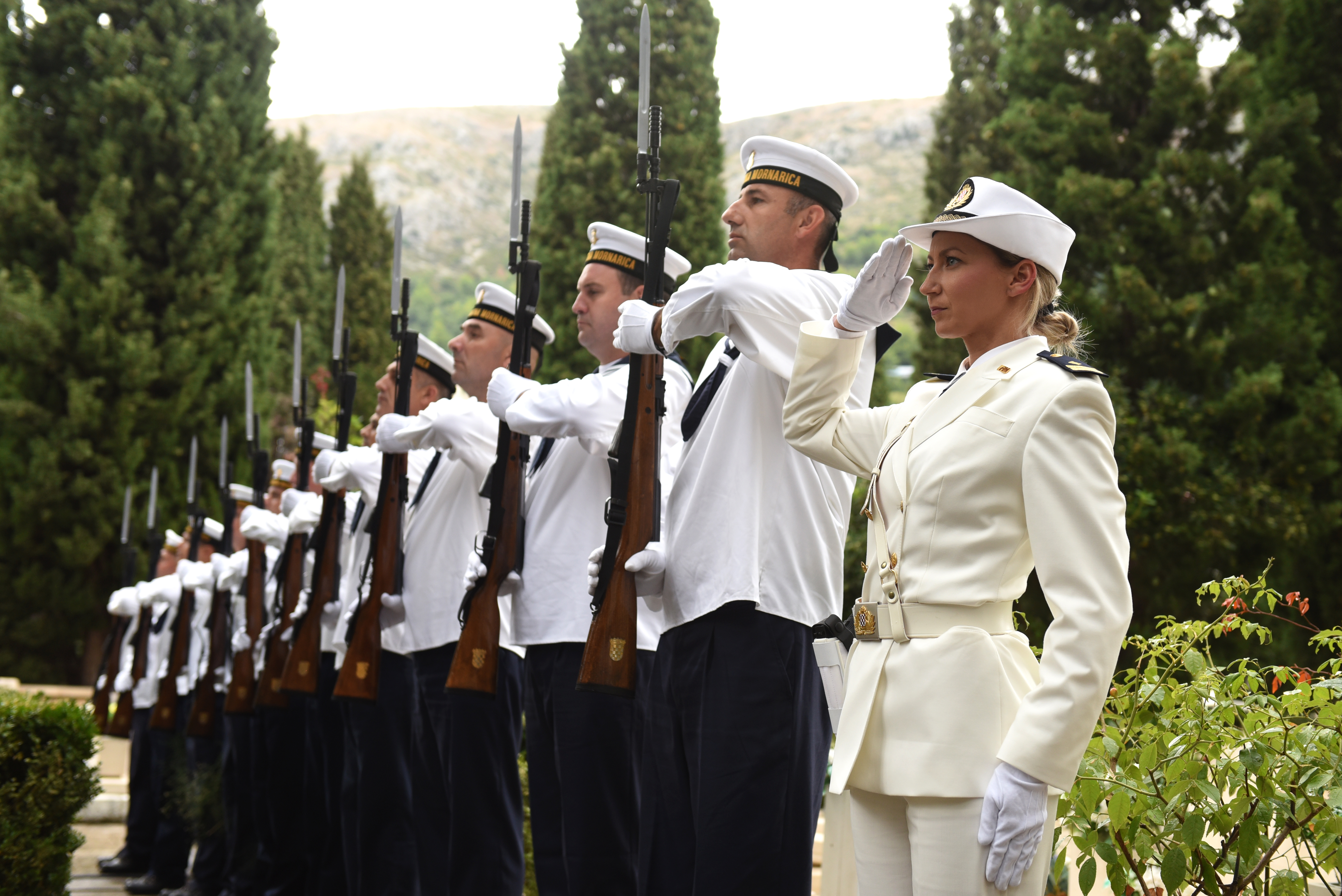 Gen. Šundov recalled the historic establishment of the Croatian Navy and the first vessel to enter its fleet – the DJB-103 armed landing craft, hijacked from the Yugoslav Navy on 14-15 September 1991. He also underlined the important role that the Dubrovnik Armed Boats Detachment played in raising the blockade around the ceremony’s host city as well as the significant role played by the Croatian Navy and the Naval Infantry Detachment in the liberation operations of the Homeland War.

“You are successors to the glorious tradition of your ancestors. In the last few years, you have made investments in your knowledge and the knowledge of younger generations, you have acquired new skills and you have successfully adapted to each new task. You thrive alongside members of partner and allied states’ armed forces in international peacekeeping missions and operations as well as international exercises. You proudly propagate the Croatian Armed Forces and ensure the visibility of the Croatian flag,” Gen. Šundov told Croatian sailors, concluding: “New challenges lie ahead of you, but I am convinced that you will respond to them with your skills, knowledge, professionalism and dedication to the military calling, as you have always done. That is the legacy we pass onto new generations of Croatian sailors. New projects create new platforms for an efficient control over and reaction to threats at sea. However, the Croatian Armed Forces’ most prized possession is its personnel. The Croatian Navy is strong because of the capabilities that its members possess and develop. Therefore, investing into the development of knowledge, capabilities and skills of our officers, NCOs and enlisted sailors will continue to be a top priority.”

In a formal address, the Commander of the Croatian Navy Cdre Ivo Raffanelli recalled the establishment of the Croatian Navy in the Homeland War, accentuating the critical role played by the Armed Boats Detachment and the defenders of Dubrovnik at the time. Cdre Raffanelli called Croatia a country oriented towards the maritime sector and labelled the Croatian Navy the safeguard of the country’s naval security and defence. He stressed that the development and modernization of the Croatian Armed Forces were moving in the right direction; their capabilities were being enhanced, while living and working conditions were being improved. Cdre Raffanelli placed emphasis on the Croatian Navy’s greatest value – good, professional and responsible personnel without whom no goal would be attainable. He concluded his address by saying that future challenges would require even greater commitment from Croatian sailors.

On that occasion, meritorious sailors received letters of commendation, rewards and promotion, while berets were presented to newly-recruited marines of the Naval Infantry Company.

Later, some three hundred primary-school students from Dubrovnik toured vessels in berth in the port of Gruž. The vessels were open for visits throughout the day. 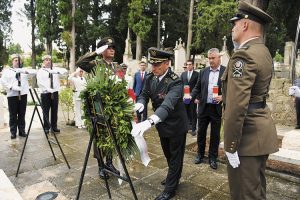 The day before the central ceremony marking the 28th anniversary of the establishment of the Croatian Navy, delegates of the Croatian Armed Forces and the City of Dubrovnik laid a wreath and lit candles for all victims of the Homeland War under the central cross at Cemetery Boninovo.

In memory of all fallen Croatian sailors, the Chief of the General Staff of the Croatian Armed Forces Gen. Mirko Šundov also laid a bay-wreath into the sea in Danče Bay, Dubrovnik.

Afterwards, the Military Ordinary of the Republic of Croatia Msgr. Jure Bogdan served a mass for all fallen Homeland War Veterans at the Cathedral of the Assumption of Blessed Virgin Mary.