Back to homepage »
Share:
Captain Mario Vukadin of the Military Police Regiment has served there since November 2019, and has received the Joint Service Commendation Medal pursuant to the decision of the Operation Commander Lieutenant General Robert (Pat) White (US) 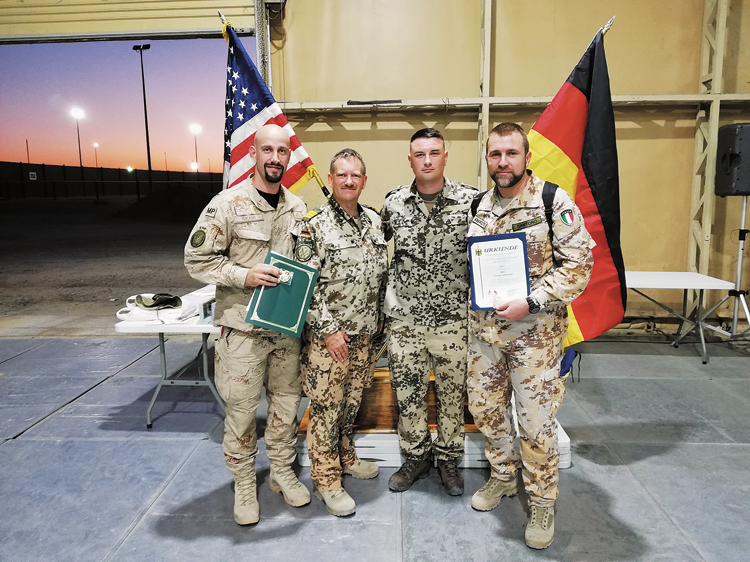 “Inherent Resolve” is the largest coalition operation in history. It has engaged over 120 countries and organisations, of which 27 currently have deployed their forces in the area of ​​operation. The Croatian Armed Forces have engaged a staff officer in the Operation Command in Kuwait. Captain Mario Vukadin of the Military Police Regiment has served there since November 2019, and has received the Joint Service Commendation Medal pursuant to the decision of the Operation Commander Lieutenant General Robert (Pat) White (US).

Members of the Croatian Armed Forces have taken part in the Operation “Inherent Resolve” led by the States, which has the task of fighting the so-called Islamic states on the territory of Syria and Iraq. Inherent Resolve is the largest coalition operation in history. It involves more than 120 countries and organizations, while 27 currently have deployed forces in the area of ​​operation. The Armed Forces of the Republic of Croatia participate with one member in the position of staff officer in the Operation Command in Kuwait. Since November 2019, Captain Mario Vukadin, a member of the Military Police Regiment, has been in that position.

The period from the early 2020 has been particularly demanding challenging, given the rising tensions between the United States and the Islamic Republic of Iran following the death of General Qasem Soleimani and Iran’s ballistic missile attacks on Coalition bases in Iraq.  Living conditions were significantly affected by the COVID-19 pandemic too. It was major challenge to exercise force protection under such circumstances and to maintain the operational functions of the mission. Yet Captain Vukadin successfully performed all routine tasks within the Joint Operations Command Centre and as national representative in the operation. He was engaged personally in the reception of members of the Croatian contingent members in the NATO Mission in Iraq, who were subsequently transferred to Kuwait early in 2020 given the worsened security situation in Iraq, as well as in the return of the Croatian soldiers home after the completion of their engagement in the Operation.

The excellence of Croatian soldiers has gained recognition in international environments, as confirmed also by the score Captain Vukadin achieved in the competitions during the deployment period. In December 2019, a competition was held for the German Armed Forces Badge for Military Proficiency, testing various skills tested: swimming in uniform, shooting with a pistol, fitness tests and military road marching. The competition engaged 420 registered members of various armed forces, of whom 120 successfully completed the competition, and 23 won attained the gold medal standard – 22 members of the U.S. Army, and Captain Vukadin!

Likewise, in the Norwegian Foot March competition held in February 2020 – a competition with a centennial tradition – the participants cover a 30-km distance under load in less than 4.30 hours, and Cpt. Vukadin successfully ended it in just 3. 35 hours.

For outstanding results and contribution to the Operation “Inherent Resolve” the Commander Lieutenant General (US) Robert (Pat) White awarded the U.S. Army Joint Service Commendation Medal to Captain Vukadin. Captain Vukadin extended appreciation to the General Staff of the Croatian Armed Forces for the trust invested in him and shared his honour over representing the Croatian Armed Forces in the Coalition forces Operation. In the Military Police Training Centre which he belongs to he is engaged in the administration of pre-deployment training of Military Police members in peace support missions and operations, the experience gained will certainly help him further improve training. In the end, he extended special appreciation to his colleagues of the General Staff Operations Centre for their support during his engagement in “Inherent Resolve”.