Back to homepage »
Share:
On 30th May 2020, Zadar will host the inaugural Croatian International Military Air Show, which is not only attractive, but is also of manifold importance for the Croatian Air Force, the Croatian Armed Forces, Zadar and all of Croatia 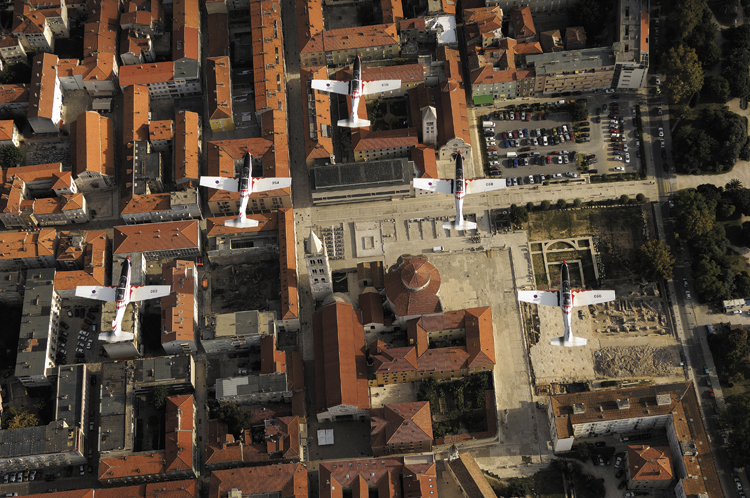 It is highly unlikely that Croatian aviation enthusiasts have heard more joyful news than the news that broke on 23rd August: Zadar will host the inaugural Croatian International Military Air Show on 30th May 2020. The news might have come as a surprise to outsiders. Although it has been said for years that Croatia needed such a manifestation due to its aviation tradition and capacities, no news about such an initiative has ever been leaked. However, the initiative was launched years ago by the best and most competent cadre – current and former members of the Croatian Air Force.

“It brings me great joy to know that our aviators initiated this project,” confirmed the Minister of Defence Damir Krstičević at the presentation of CROIMAS in Lt. Col. Mirko Vuušić Barracks in Zemunik Donji near Zadar. As deputy prime minister, Krstičević asserted that the air show enjoyed full support from the Croatian Government. Similar words were also spoken by the Chief of the General Staff of the Croatian Armed Forces General Mirko Šundov, the Commander of the Croatian Air Force Brigadier General Mato Mikić, the Prefect of Zadar County Božidar Longin, the Mayor of Zadar Branko Dukić and State Secretary at the Ministry of Tourism Tonči Glavina. 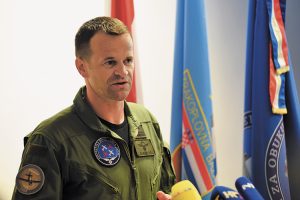 The spokesman of the initiators from the Croatian Air Force was the Head of the Operations Sections, 93rd Air Base Command Lieutenant Colonel Damir Barišić. Now that the idea of the largest Croatian air show is becoming reality, it is worth noting that Lt. Col. Barišić deserves the most credit for the idea falling on fertile ground. As a veteran pilot and former leader of the Croatian Air Force Display Team “Wings of Storm”, he has combined his enthusiasm with his long-time experience from the Croatian Air Force and international air shows, developing the idea in great detail and from multiple points of view, as seen at the presentation. A large air show is not a routine exhibition of flying machines where a bunch of people stare at the sky. It is much more than that, which is why its organization is so taxing. “CROIMAS is of manifold importance for the Croatian Air Force, the Croatian Armed Forces, Zadar and all of Croatia. Such events are an added value to the early tourist season, which holds an important place in the prospects of tourism development. It directly promotes Zadar and consolidates its place on the world tourist and aviation map. Moreover, it is a chance for creating a stronger bond between the Croatian Armed Forces and the local population as well as for promoting the Croatian Air Force and the military pilot profession. Finally, such an event entails great economic benefits for the local community and allows us to intensify our collaboration with allied and partner air forces,” said Minister Krstičević. His words were confirmed by the presence of the representatives of the City of Zadar, Zadar County and the Ministry of Tourism.

Beside the Croatian Air Force, the City of Zadar and Zadar County are the co-organizers of the event. The Croatian Air Force will be in charge of the central, flying portion of the event, while civil institutions will provide for its “land” component – the spectators and off-programme happenings. Such a concept means that all aircraft will take off from and land at the 93rd Air Base, where pilots and attendant personnel will be accommodated and where they will receive corresponding logistic support. Up to 450 participants and 100 aircraft are expected, which will not strain the staff of the 93rd Air Base more than usual. They already provided support to a large number of NATO aircraft and personnel in international military exercises at the Zemunik Donji barracks in July. Moreover, two renowned military display teams, Frecce Tricolori (ITA) and Red Arrows (UK) have been visiting the base for several years. Landings and take-offs during dress rehearsals, at the air show itself as well as during display teams’ arrivals and departures will not greatly interfere with regularly scheduled flights at the civil airport in Zadar. 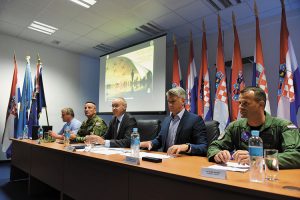 As announced by Deputy Prime Minister Krstičević, the date of Croatia’s Statehood Day will revert to 30th May next year. As a part of the celebrations, the people of Zadar and 100,000 expected guests can look forward to a large spectacle directed by the most renowned display teams from NATO and partner countries. Flying stunts in the skies above the Zadar Canal, the safest place possible, will be observed from the main stage on the Zadar quay, various locations on the stretch from Kolovare Beach to the neighbourhood of Puntamika, the island of Ugljan and boats in the canal. Just like the “Wings of Storm”, Frecce Tricolori have already flown above the canal. Of course, air shows taking place above sea do exist (e.g. in the Italian town of Bari, which is relatively close to Zadar), but nowhere in the world is there a place as suitable, safe and attractive as Zadar, the cradle of the Croatian Air Force. Zadar and its people will ensure that spectators are not lacking anything; the required infrastructure is already in place and admission will be free. The only requirement that the Croatian Air Force and its associates cannot vouch for is – fair weather.

As expected, the two most frequently asked questions at the presentation referred to the participants and the cost of the air show. Official invitations have already been sent out to the addresses of the best air display teams. The reputation and contacts of the best Croatian air ambassadors, the “Wings of Storm”, will certainly help attract participants. “Our maximal capacity is 100 aircraft and 450 participants. We estimate that 50-70% of invitees will take part in the air how. That would be a fantastic figure for the first edition of CROIMAS and it would make it one of the largest air shows in Europe. The flying programme can last up to nine hours, but our realistic estimate is five hours,” said Lt. Col. Barišić. As far as costs are concerned, the key item is the cost of fuel. However, NATO STANAG 3113 stipulates that participants must cover that cost on their own. Therefore, initial costs that the Ministry of Defence will be directly charged with for organizing the air show will not exceed HRK 1,000,000 and even that is a conservative estimate. A more precise estimate is expected in September. The local community will collect direct and indirect revenue, which will be used for covering the costs of organization. Direct revenue will stem from concessions for stands and various sponsorship deals. Indirect revenue, which will be procured from tens of thousands of spectators, will be more difficult to calculate, but it will be the most important item on the balance sheet. The Ministry of Defence and the Croatian Air Force may not profit from the event materially, but they will receive the best possible promotion of all branches of the military, not just the Croatian Air Force and the military pilot calling. In Zadar, the members of the Croatian Navy, the Croatian Army and the Special Forces Command, the cadets of the Croatian Defence Academy and many more will have a chance to tell their stories, while spectators will also get to tour the Croatian Navy’s vessels and static displays of weapons and equipment. 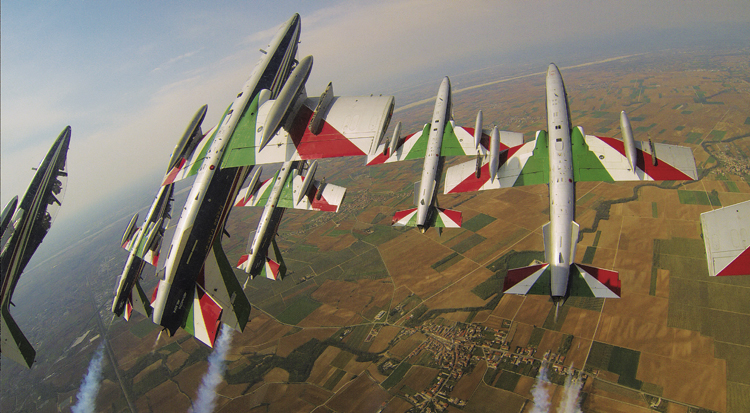 Nine months remain until the first edition of CROIMAS – a time frame that might seem too short for organizing such a complex event. However, the staff of the 93rd Air Base assure us that they are ready as they have the required experienced, personnel and means for carrying out their commitments; the commitments of civil institutions are limited to their areas of expertise. The Ministry of Tourism and related institutions will take the required steps for promoting the air show abroad. Yes, an attractive air show can give occasion to foreign tourists for visiting the Croatian coast before the beginning of the “full-fledged” tourist season. So as not to forget domestic tourists, we know for a fact that aviation enthusiasts from the beginning of this text, even the ones from the remote parts of eastern Slavonia, have already booked accommodation in Zadar for late May 2020.

Along with taking place on Statehood Day, CROIMAS 2020 will also be held in the year in which the 25th anniversary of Operation Storm, the 29th anniversary of the establishment of the Croatian Armed Forces and the 15th anniversary of the establishment of the Croatian Air Force Display Team “Wings of Storm” are being commemorated. Likewise, it coincides with Croatia presiding over the Council of the European Union for the first time. Of course, the plan is for CROIMAS to become a traditional event. According to current projections, it is to be held every five years. Staunch enthusiasts have immediately expressed a wish for the time interval to be shorter, but the initiators and organizers are saying no to that idea for now. Lt. Col. Barišić argues that a five-year time span is the best guarantee for securing the participation of the best air teams as it will give them enough time to mark the event in their calendars and plan their arrival at Zadar. But, let’s not get ahead of ourselves. For starters, let’s patiently wait for May next year.