Back to homepage »
Share:
The cadets of the inaugural class of Military Naval Studies have returned from their first voyage, having spent five days in the local waters of the South and Central Adriatic. A method of practical education, the on-board training is set to take place at the end of each academic year… 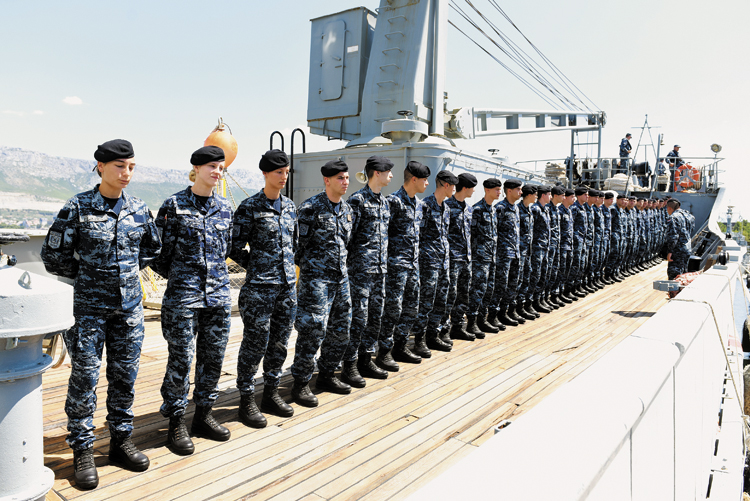 Accompanied by the lecturers of the Croatian Defence Academy, Commander Slaven Sučević and Lieutenant Commander Tino Sumić, the cadets sailed the Split-Vis-Hvar-Korčula-Dubrovnik-Palagruža-Split route in the local waters of the South and Central Adriatic from 13th to 17th July.

During the voyage, 33 cadets were familiarized with the life and work aboard a Croatian Navy vessel and mastered the practical part of their freshman-year courses Navigation I, Navigation II and Security at Sea.

“The objective of the voyage was for the cadets to be familiarized with the basics of navigation, ropes, manoeuvring, basic navigational instruments and rescue equipment. The task was not an easy one, but the cadets mastered it brilliantly. They boarded a vessel for the first time, acquainted themselves with the vessel’s crew and familiarized themselves with the specific qualities of working aboard a vessel,” emphasized Commander Slaven Sučević upon the cadets’ return to Naval Base Lora. He also thanked the crew of the Andrija Mohorovičić training vessel for their large contribution to the cadet’s training.

During their first voyage, the cadets had taken part in a real-life search-and-rescue mission. In collaboration with the National Headquarters for Search and Rescue at Sea, they had sailed to the local waters south of the island of Korčula and searched the area assigned to them. “The experience was an indicator of what awaited the cadets in their career. They saw what it was like to be a part of a crew aboard a search-and-rescue vessel,” said Lieutenant Commander Tino Sumić.

On behalf of all cadets, Cadet Petar Vukšić thanked the lecturers for a well-devised voyage and extended appreciation to the shipmaster captain and his crew for the new knowledge acquired during their stay aboard the vessel: “We carried out seaman tasks. The most difficult part was reading navigation charts. You have to pay attention to many details and be alert 24/7.”

A method of practical education, the on-board training is set to take place at the end of each academic year during the five-year integrated undergraduate and graduate university study programme Military Naval Studies. The students are future officers of the Ministry of Defence and the Croatian Armed Forces as well as the future staff of the Ministry of the Sea, Transport and Infrastructure and the Ministry of the Interior. The study programme, jointly developed by the Franjo Tuđman Croatian Defence Academy and the University of Split, offers specialization in Military Nautical Studies and Military Marine Engineering. Military occupational training and on-board training are essential components of the study programme.

During their studies, cadets acquire theoretical and practical knowledge, familiarize themselves with relevant scientific principles and procedures of navigation as well as attain vital skills for ship management: navigation, manoeuvring, maintenance, cargo handling and other procedures regulated by national and international conventions and standards.

Classes are taught by professors from the University of Split as well as lecturers and military experts from the Croatian Defence Academy and the Ministry of Defence in specialized classrooms and demonstration rooms at Fleet Admiral Sveto Letica-Barba Barracks and the Faculty of Maritime Studies in Split. The second class of naval cadets will be enrolled this autumn.