Back to homepage »
Share:
“The Great Changing of the Guard is a part of the Republic of Croatia’s identity, a value of the Homeland War, a means of popularizing the military calling and a tourist attraction,” underlined Deputy Prime Minister and the Minister of Defence Damir Krstičević 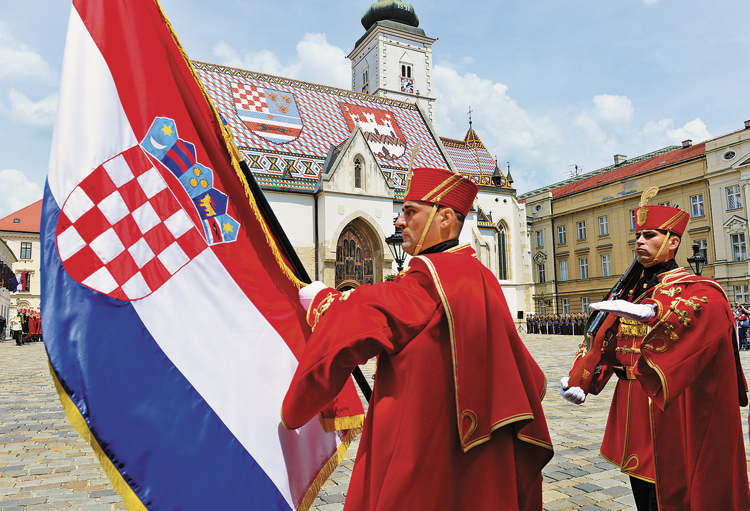 The programme kicked off with a commemorative concert of the Croatian Armed Forces Band on Nikola Šubić Zrinski Square in downtown Zagreb. The central event was the Great Changing of the Guard on nearby St Mark’s Square, performed by the members of the Honour Guard Battalion in front of numerous citizens and guests, including the Speaker of the Croatian Parliament Gordan Jandroković, Deputy Prime Minister and the Minister of Defence Damir Krstičević, the envoy of the President of the Republic of Croatia Zrinko Petener, the Chief of the General Staff of the Croatian Armed Forces general Mirko Šundov, the Deputy Chief of the General Staff Lieutenant Colonel Drago Matanović, the ambassador of the State of Israel to the Republic of Croatia Ilan Mor and many other senior military and state officials.

After the Great Changing of the Guard, Minister Krstičević wished Croatian soldiers many happy returns on Croatian Armed Forces Day, reminding them that the current government had returned the ceremony to St Mark’s Square after 17 years. “The ceremony is a part of the Republic of Croatia’s identity, a value of the Homeland War, a means of popularizing the military calling and a tourist attraction,” underlined Minister Krstičević.

“I am thankful for the efforts, the dedication and the endeavours being invested into the Croatian Armed Forces so that they could carry out their tasks in accordance with the Constitution, laws and commands,” said General Šundov. 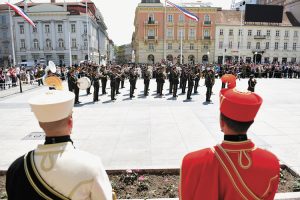 The Commander of the Croatian Army Major General Siniša Jurković recalled that troops had returned to the towns of Vukovar, Varaždin, Sinj and Ploče in the new operational structure, adding that good collaboration had been established with the local authorities in those towns.

“Soldiers’ renewed presence among civilians benefits both the civilians and the soldiers who have returned to their hometowns. They are now more motivated, more content and more efficient in carrying out their tasks,” General Jurković concluded.

The Commander of the Honour Guard Battalion Colonel Elvis Burčul highlighted his unit as one of the most important symbols of Croatia’s statehood.

“These young people have demonstrated today how well trained and capable the Croatian soldier is. Excellent is not an option, but a conditio sine qua non in the Honour Guard Battalion. Only the best and the most capable soldiers can join this unit,” Colonel Burčul said.

The celebration continued on Lake Jarun, where visitors could tour a static display of the Croatian Armed Forces’ military equipment and weapons as well as try beans prepared by the soldiers. In the evening, the visitors enjoyed a programme featuring gun salutes, fascinating parachute jumps, an exhibit drill performed by the Honour Guard Battalion, a demonstration exercise and a performance by the Croatian Air Force’s Display Team “Wings of Storm”.