Back to homepage »
Share:
The Ceremony  of the Changing of the Guards, performed by the members of the Honorary Battalion of the Croatian Armed Forces.will be presented in the Upper Town after 17 years again. On 27 May 2017, on the eve of the 26th anniversary of te Croatian […]

The decision on the establishment of an honorary unit for ceremonial activities for the highest authorities was made by the first President of the Republic of Croatia  Franjo Tuđman pursuant to the proposal from Žarko Domljan, the first Speaker of the Croatian Parliament.  18 April 1991 saw the establishment of the Honorary Presidential Guard within the Ministry of the Interior of the Republic of Croatia and was manned by members of the special police units ( all volunteers of the Homeland War) and the first Croatian police members, and was commanded by Major General Velibor Kikerec. In addition to the ceremonial procedures, the members (the participants of the campaigns in Pakrac and at Plitvice) were also prepared for close protection of the President of the Republic as the Supreme Commander of the Croatian military and of other officials and protected facilities in the Upper Town.

The Honorary Presidential Guard was first presented at the historic line-up  of the Croatian National Guard in the FC Zagreb Stadium on 28 May 1991. Two days later the first ceremony of the Changing of the Guards was performed in the St. Mark’s Square and was conducted regularly until 2000.

The background idea was to bring soldiers dressed in historical uniforms and through the changing of the Guards to the citizens and emphasise the role and importance of the uniform as a small yet impressive symbol of the Croatian statehood and it has remained so to this day. The presentation of the Croatian soldiers, NCOs and offisers, eye catching and elegant and skilled in handling the arms and in joint military procedures had the mission to display the aspiration for the internationa recognition and Euroatlantic integration as well as the ability and the will to defend the people, the state and the integrity of Croatia. 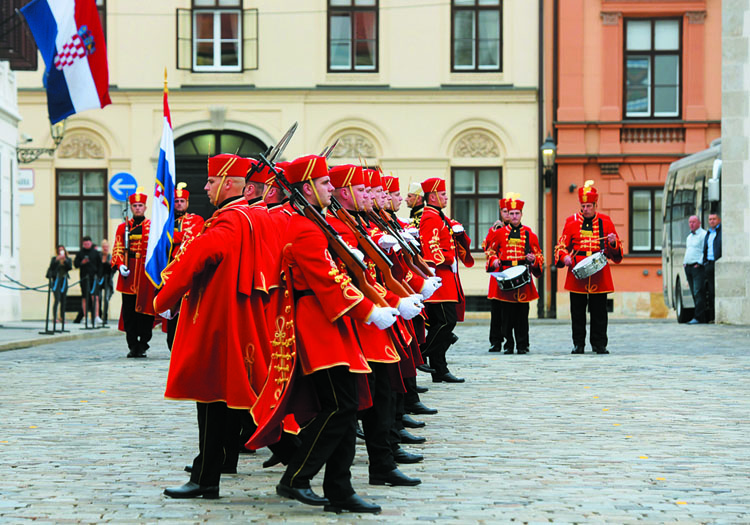 The Honorary Guard is dressed in ceremonial historical uniforms designed as an original model drawing on the formal dress of the Croatian magnates and virilists of the Croatian Parliament from the historical period of Croatia proper (Banska Hrvatska) and the costumes of the Croatian National Revival period (19ct). The new uniform model thus incorporated the centuries-long military tradition and aspirations of the Croatian people for its own state. The Guards uniforms are made of quality English cloth. The red denotes the traditional Croatian colour distinguishing the Croatian unifs from the enemy in the battlefields during the resistance to the Ottoman invaders. Until early 20th century it was also the colour of Zagrebs. The uniforms in black and white are worn by officers . The design and the vivid colours are complemented with a cap with a golden Croatian coat of arms, tight-fitting braided jacket and the overcoat, white gloves and officer’s dagger (worn by the commander)  and the leather ammunition case.

The ceremony – a work of art

The ceremony takes place in the space between Banski dvori (the seat of the Croatian Government) and Saint Mark’s Church. It comprises several parts; the arrival of the two shifts to the changing spot, the inspection of the arms of the incoming shift, the minor changing of the Guards at the entrance to Banski dvori, the folding of the knifes on the rifles of the outcoming shift and the major  changing of the guards between the two shifts and the departuere from the spot. The shift departs from the Banski dvori  and the incoming one arrives from nearby streets ( Kuševićeva  and Ćirilometodska). The Great Guard Shift Ceremony features and revives the daily changing of the guards as performed in the years of the Banate of Croatia preceding the World War II, visible in the documentary of the time.  The ceremony lasts for 10 – 15 minutes, depending on the orchestra. The ceremony was ideated by renowned choreographers and other artist staff of the Croatian National Theatre and as such is a work of art, combining  the characteristi military elements and dance moves. The ceremony takes place in the Upper Town, in the area between the Banski dvori and the church of St. The mark consists of several parts with respect to the elements in the execution: the arrival of the two groups at the place of the shifts, the weapons inspection of the coming shifts through the action of the rifle show, the small shifts of the guard at which the shunting of the guards at the entrance to Banska dvora and the jumper from both A group of knife blades will go down the stairs, the big shifts between the two groups and the departure from the shifts. The departure of the shifts is from the area of ​​Banski dvori, while the other group comes from Kušević and Ćirilometodska Street. It is performed by three officers (wearing the historic black and white uniforms) and 26 enlisted soldiers and NCOs wearing the red ones. The officers, the Commander of the Guard and the shift commanders wear officers’ dagger in the leather case, and junior members are armed with semi-automatic rifles (the M59/66 model). The music -playing members wear only the jackets.. The ceremony of the Changing of the Guards will bring another attraction to Zagreb, like the many European capitals with the similar military ceremonial programmes, and will continue the tradition dating ack to the time of the establishment of the modern that brings us back to the time of the establishment of the modern Croatian state, but also to bring the army closer to the citizens. The changing will take place on Saturdays and bank holidays in the summer season (27 May 27 to 1 October). It will be also be a promotion of the Croatian Armed Forces and of the country’s centuries-long mlitary tradition.