Back to homepage »
Share:
The Croatian Defence Academy is marking its 25th anniversary, boasting a long military education tradition. However, our interview with the Commander was addressed to the topics of the moment, bearing in mind that the Academy is entering a new period, which will affirm it as […]

The Croatian Defence Academy is marking its 25th anniversary, boasting a long military education tradition. However, our interview with the Commander was addressed to the topics of the moment, bearing in mind that the Academy is entering a new period, which will affirm it as a highly regarded research and education institution in the civilian academic frameworks and internationally.

General, we would like You to briefly review the development of the Croatian Defence Academy over the past 25 years

The development of the Croatian Defence Academy has always been determined by its assigned tasks, still during the wartime. The wartime imperative was to impart basic knowledge on NCOs and officers within shortest time, so that they could apply it at battlefields. The Academy was organised so as to provide the best tools for the trainees to pass them on to their units to use them in the combat operations. The success of the 1995 operations proved the Academy to have accomplished the mission indeed. Another key task, namely the preparation of the Croatian Armed Forces for NATO demanded training and education programmes and syllabi with the Alliance’s standards. The Academy completed that task well too, as demonstrated by the respected performance of the Croatian Armed Forces in NATO-led operations. The third task for the Academy was to establish an effective peacetime education system, which implied adaptations rendering the Academy capable of organising all types of military and military academic education required by the Croatian Armed Forces and the overall security system of the Republic of Croatia.

What personal experiences from the education in the Croatian Defence Academy would You single out?

My own experience says that the Croatian Defence Academy has offered the opportunity to anybody interested in broadening his/her knowledge. Upon entering the education system you have the time to organise your experiences and knowledge acquired, to test them and to compare them to the systems of the western countries. During my education I extensively consulted various reference, expand my own views and knowledge and learn of novelties in foreign education systems. Our foremost task regarding the officer education is to teach them to learn and to apply the acquired knowledge. 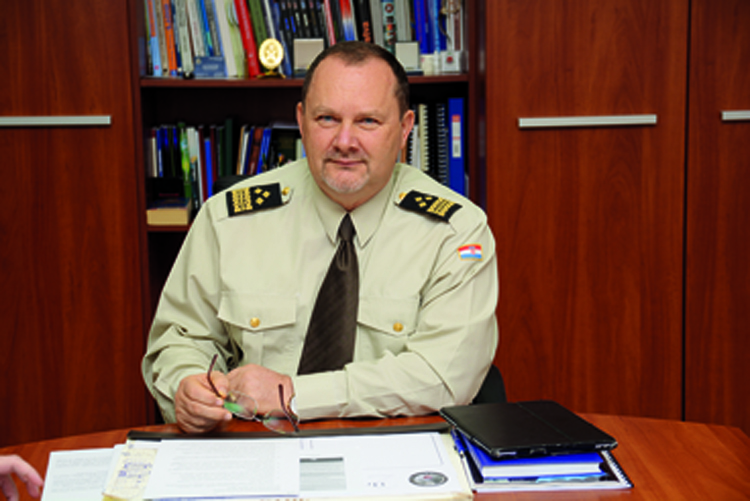 This will be the third year of administration of new university study programmes. Is it possible to review their quality already?

We intended to build a system recognised by the University of Zagreb, complying with the Bologna requirements, process, academically valorised and to enable mobility of the lecturers and students alike, and it has been made possible. The matter of the syllabi and programmes needs to be analysed on an annual basis and the system needs to be updated as necessary. I believe that valid conclusions will be drawn following a four-year cycle, upon seeing the post-graduation competence of our students and their performance in their respective units, as well as the upgrades if necessary.

Has the young people’s interest in the studies retained the initial momentum?

The interest is still considerable, and I think will remain so, but we must prevent any improvisation in that regard.  We have emerged in the education market and compete with other faculties. We have benefitted from good promotion and raised the interest from the public. I think there is room for even better promotion, stressing the benefits and privileges of studying at the Academy as well as in the career progress and the future employment.  I have repeatedly underlined that the programmes are fairly demanding with considerable amount of exigent technical subjects and the workload on the students is almost twice as hard compared to the rest of the programmes. The application process itself is very demanding and includes special psychological and physical requirements.

What is Your view of the cadets’ approach to the education and the military service?

The staff of the Croatian Defence Academy has noticed the difference between the previous and the current cadet education system, in terms of the approach, efforts and commitment, and rapid adoption of the values accepted in the Croatian Armed Forces. It is delightful to see their devotion towards the national values and missions. I think we are doing a good job of educating the officers of firm character, aware of their responsibility and the tasks, competent officers meeting all standards and requests assigned to them by the Croatian society.

How far has the organisation of the graduate studies, including those designed for the Croatian Air Force and Air Defence and the Croatian Navy progressed?

The accreditation of the integrated graduate programmes of military engineering and military management is under way, while the accreditation of the undergraduate and graduate cadet programmes designed for the Croatian Navy is in its last phase, and I expect that the Government of the Republic of Croatia to adopt the decision to launch the programmes in January 2017. We have the respective design study, which we have harmonised with the military and civilian requirements and is presently undergoing peer review, to be followed by an international review, in order to enrol the first students in the academic year 2018-2019. The already administered study programme in aeronautics has undergone modifications to allow part-time graduate studies designed for pilots, which will facilitate the design of an integrated graduate study of aeronautics for the needs of the Croatian Air Force and Air Defence. It should be emphasised that the study programmes designed for the Croatian Air Force and Air Defence and the Croatian Navy will be accredited in the English language too, to internationalise them, and some countries have already showed the interest in them for their soldiers as full-time students.

Will new programmes require infrastructure improvements in the facilities outside Zagreb as well?

They will. We have previewed the investments in the barracks “Sv. Nikola” in Split, primarily into the training facilities. The year 2017 should see the refurbishment of the facilities housing the lecture theatres and study rooms. The refurbishment plans for specialised classrooms required will be in place, and we also intend to use the capacities of the Faculty of Maritime Studies in Split. Some accommodation capacities will undergo refurbishment as well, including the facility at Zemunik. The respective project documentation has been collected.

What role will have the Officer School for the trainees other than the cadets?

The Croatian Armed Forces will need the personnel specialised in trades outside the study programmes administered by the Academy, such as medical doctors, lawyers, economists, and will continue to provide officer education for enlisted soldiers and NCOs graduating from civilian faculties. In my view the ratio between cadet officers and other officers in Basic Officer Training will be 80:20 % or 70:30 %.

Will the NCO education administered by the Academy attain an international component?

We are obliged to initiate a series of projects. We deem that the quality NCO training programmes merit international valorisation. It is most likely that in 2017 the Academy will administer the first NCO course for the A-5 member countries, in co-operation with other countries and their instructors. The Course could well surpass the A-5 initiative and be evaluated at NATO level.

What is the situation with the university accreditation of the education programmes administered by the Command and Staff School and the War School of the Croatian Defence Academy?

First and foremost, I want to say that the Croatian Defence Academy pays due attention to the development of the teaching staff. The current year has seen intensified appointment to associate and teaching levels and the amendment of the related regulations. We have also been granted the respective research domain, facilitating the appointments. As soon as we prepare a pool of teachers as competent authorities we shall undertake the accreditation of the syllabi of the two schools, with the Command and Staff School as a part of the university specialist study programme and the War School entering the doctoral studies evaluation system.  That will integrate the system of higher education system of the Croatian Defence Academy.

What is the ratio between the teaching personnel from the Croatian Armed Forces and the civilian experts?

Maths, physics and the Croatian language can be taught by civilian experts, unlike military history, pedagogy, sociology, psychology and ethics for which we need the personnel with considerable experience from the defence system or units, who later made careers as researchers and teachers. We depend on such profile of teachers for the branch tactics or the combat systems operation. The co-operation with the civilian faculties will be continued, but we will work to equalise the ratio between the civilian and military teaching staff. The teaching job is highly appealing for former officers of the Croatian Armed Forces, and we shall strive to include As many of them as possible, in view of their respectable knowledge combined with the invaluable field experience. On the other hand, we also have young officers undergoing doctoral studies in various domains. As many as eight have been recruited in 2016 and we want them to continue their careers, and we also plan to engage four more teachers appointed to academic levels.

Eight members of the Croatian Defence Academy are completing their doctoral theses, and will enter the broad pool of military research and teaching personnel, who are important for the ultimate goal – an autonomous higher education and research institution for the military studies, issuing own diplomas.

Is there a precise timeline to fulfil the goal?

In 2017 the Croatian Defence Academy will be organised accordingly and initiate the necessary legislative processes and I believe that most conditions will be fulfilled by the beginning of the academic year 2018/2019. The decisive element in this regard is the support and understanding from the President of the Republic, the Defence Minister and the Chief of the General Staff. I see this project as the most important for the defence and security system of the Republic of Croatia. The Strategic and Defence Studies Centre will continue to develop and to educate technical personnel, as well as the defence and security concepts and to conduct research projects. The first issue of a new research magazine in intelligence, defence and security is planned in February, edited by an international board and with a large number of expert contributors, to maintain the high research level.

The infrastructure of the Barracks will be further renovated and modernised.

That is so. We have provided very good material conditions to execute our plans, primarily the teaching infrastructure, but we are also investing in the accommodation, sport and other auxiliary facilities, for a comfortable 24-hour stay in the Barracks. The works have begun on the construction of an accommodation facility for officers for temporary stays, either as the Academy students or teaching personnel, but also the foreign attendees of various education programmes, so the accommodation will be provided on a commercial basis. In 2017 the documentation will be collected for the combat divers and underwater training centre, and a swimming pool built to increase soldiers’ physical readiness.  The old storage facilities will be refurbished into a Cadet Club as a recreational space. These projects will result in probably the best equipped campus in Croatia and in this part of Europe