Back to homepage »
Share:
The Lourdes Bike Tour is a story of Sergeant First Class Mladen Švađumović and his challenge, taken to boost body and spirit,  and his experience which incited 1st Lieutenant Ivan Jakobović, who joined him this year on a 16-day bike tour to Lourdes 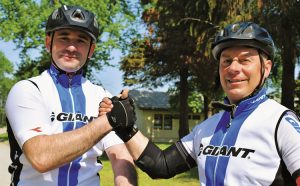 The Lourdes Bike Tour is a story of Sergeant  First Class Mladen Švađumović and his challenge , taken to boost body and spirit,  and his experience which incited  1st Lieutenant Ivan Jakobović, who joined him this year on a 16-day bike tour through four countries to Lourdes , France; their example will hopefully inspire others. The story began last year when SFC  Mladen Švađumović took and beat the challenge of the first cycling pilgrimage to the sanctuary in Lourdes. He decided to repeat it this year, when he was joined by 1st Lt. Ivan Jakobović. The two members of the  1st Mechanised Battalion “Sokolovi“ of the Guards Mechanised Brigade, departed from Davor on 1 May  2018, accepting the challenge of beating themselves and cycling pilgrimages all the way to the sanctuary of Our Lady of Lourdes.

In Lourdes they joined other participants of the 26th Pilgrimage of the Croatian Army and Police and the 60th International Military Pilgrimage. The initiator of the Lourdes Bike Tour is Sergeant  First Class Mladen Švađumović, a Croatian soldier and a volunteer of the Homeland War of 1991. He was first a member of the 3rd Guards Brigade “Kuna“ and later of the 5th Guards Brigade “Sokolovi“ and took part in several of liberating operations for which he was awarded a number of decorations and a pistol with the dedication by the former Defence Minister Gojko Šušak. SFC Švađumović also went on several pilgrimages. 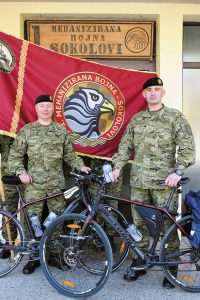 The Bike tour Lourdes was a pilgrim’s and cycling challenge he could not decline and which proved  the many achievements coming from will and persistence.  A few months after the first Lourdes Bike Tour, nnr Švađumović  took the challenge again, but this year he had a company – his adventure incited 1st Lt Ivan Jakobović, 12 years his junior, to accept the challenge and join him on the tour. 1st Lt. Jakobović joined the Croatian Armed Forces in 2006, first as a member of the Battalion “Gromovi“,  and later of the Honorary Battalion and the 1st Mechanised Battalion “Sokolovi“.  1st Lt. Jakobović shares the same enthousiasm when it comes to challenges and gladly accepted the invitation to join him. He wanted to make a personal experience of beating the challenge of the  2000-km path and to contribute to the promotion of active and healthy life and sporting spirit. The challenge lasted for 16 days. On their way, which began with a warm send-off at Davor  via Zagreb and Delnice  the two servicemen crossed four countries and stopped in 16 towns; on the 8th day they marked their first victory – 1000th  kilometer, by the statue of Our Lady on a cliff near  Vesimo (Genoa). On day 9 they reached France, and having stopped in Cannes to rest, they continued towards Lourdes, leaving Monte Carlo, Nice, Toulon and other towns behind them. The last three days they had a weather challenge too; persistant rain and cold wind woke them up  and by 10 they would be wet through: the frost forced them to look for a shelter.  But the view of the  peaks of the Pyrenees cheered them up and showed that they were coming closer to their destination. On their arrival to Lourdes they were welcomed by the members of the Honorary Battalion, Brigadier Gen. Siniša Jurković –  the Commander of the Croatian military pilgrimage  – and the Croatian Navy’s Vocal Ensemble  ”Sv. Juraj”; He who dares wins, and travelling brings so many pleasant moments.  The two of them often received encouragements from the locals they met on their way, who recognised their flag, talked to them, wished them luck or offering them a meal.

The experience of organising his first bike pilgrimage was very helpful for the year 2019 challenge. “This year it was easier – 1st Lt. Jakubović was a great companion, his will, persistence and enthousiasm made it more interesting and fun”.  The good bycicles helped too. As soon as they came home they decided to do  their  bike tour again next year again, and hope that it will inspire others to follow suit and that the Lourdes Bike Tour will become a tradition for the future generations of soldiers.