Back to homepage »
Share:
(Excerpts from the interview with the Defence Minister Damir Krstičević)   “My focus during the office will be on the human capital – the enlisted soldier, NCO and officer, as it was the decisive element of the victorious Homeland War“ said the Croatian Defence Minister […]

(Excerpts from the interview with the Defence Minister Damir Krstičević)

“My focus during the office will be on the human capital – the enlisted soldier, NCO and officer, as it was the decisive element of the victorious Homeland War“ said the Croatian Defence Minister Damir Krstičević on assuming the duty, and underlined the necessity of a National Security Strategy for efficient response to future threats and risks. The Minister has pledged to manage the Ministry of Defence transparently. In our interview we touched on a variety of topics of military relevance”.

In one of Your earliest public addresses You underlined the importance of composing a National Security Strategy as a prerequisite of a broader concept of homeland security in view of new threats and risks we are faced with.

As I have announced, the National Security Strategy, the Act on the Homeland Security System and the establishment of the homeland security system will be among the first assignments of the Croatian Government and me as Deputy Prime Minister. It will be a Croatian model, and will engage all relevant ministries, institutions and organisations, the civil society, the public concerned, the private sector and the citizens acting in co-ordination. The homeland security system is not there to construe enemies but to recognise the threats in the interest of the citizens. It strives to boost the partnership of all segments of the Croatian society, not lead to militarisation. It aims to link more efficiently the resources, capabilities and defence and security aspects.  It will enable us to identify and respond to potential threats and risks, which are far more complex than they used to be  and include hybrid warfare, information operations, terrorism, cyber terrorism, migrant crises, unemployment, demographic trends and natural disasters. The strategic environment has been altered change, requiring each country to adapt and build better connected, more efficient and faster-working systems. Our lasting task will be to identify potential threats and to provide an efficient, well-timed response and assign the adequate forces. The homeland security system implies a force provided through synergy of all security and defence systems and of all citizens. The citizens will be our main operating focus. The organisations have been established to serve the citizens in the first place. A stable, powerful and prosperous country depends on satisfied and safe citizens and safe society. 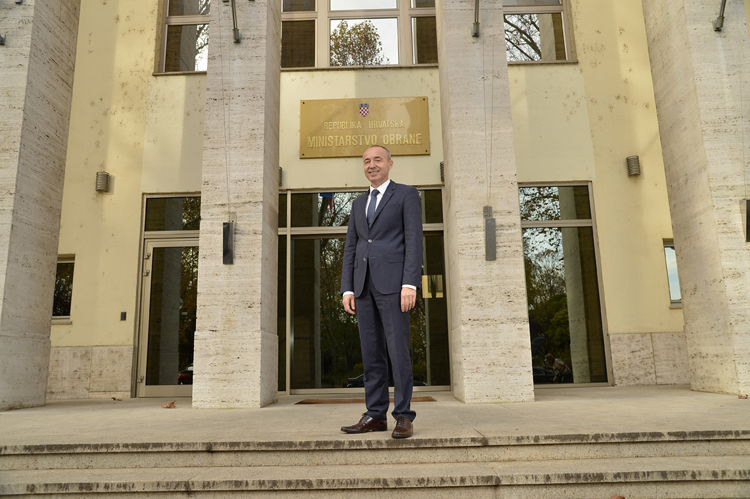 It is our lasting task in the Ministry of Defence, bearing in mind the aforementioned threats, to create the conditions to enhance the defence potential and capabilities. It does require substantial financial means and I shall work to achieve the required budget structure. We have to reverse the decrease of the budget allocate for defence purposes. In the period from 2008 to 2016 it was reduced by 25% – to 1.400,000 mil kuna. From the year 2008, when it totalled 1.58 % of GDP, the defence budget has decreased to the present 1.17 % GDP. In the meantime in 2015 it amounted to 1.55. The new era, new threats and risks call for new responses as well. I believe that the Government of the Republic of Croatia will be able to prioritise the items and ensure further strengthening of defence capabilities and investment into the needs of our enlisted soldiers, officers and NCOs, to enable their constant training and better working and living conditions. Investment into the human capital always brings returns.  The cost-effective and wise investment into the modernisation of the defence sector not only is of benefit for us but it also contributes to the credibility of the Republic of Croatia in NATO. Speaking as Defence Minister I would like to see quicker modernisation timeline, but it will depend on the quicker economic growth of the Republic of Croatia. We also have to fulfill NATO commitments regarding the amount of the defence budget. We have received the assistance from our allies, particularly the United States through the billions kuna worth donations of weapons, equipment, education and training opportunities, which definitely step up the initiated modernisation processes.

What in Your view should be done to improve the working and living conditions of the Croatian soldiers?

The Croatian Armed Forces, who along with their traditional tasks assist continuously the civilian community too, merit continuous investment into their working and living conditions wherever they are serving and I consider that imperative as one of my priorities. We need to provide optimal conditions for our soldiers, who are doing their best to upgrade the defence capacities and to perform any assigned task at home and abroad. It is a time-consuming process. Speaking as a soldier myself, I assure you that we are going to take stock of the situation and seek solutions to obtain visible results within the shortest possible time.

The re-organisation is a permanent process aimed at building new capabilities and the upgrade of the efficiency of the armed forces. What qualitative and quantitative personal changes are to be expected and what are the biggest challenges faced by the members of the Croatian Armed Forces?

The fact is that new time brings also new challenges. To make the defence system capable of facing the new challenges and threats it needs to be tailored accordingly, adapted and provided with new capabilities. The biggest challenge in the re-organisation process – a permanent one, as You have said – is to identify new tasks and threats. A cost-effective, efficient and logical management of the most valuable segment of the defence system – the personnel – is aimed at producing an adequate and focussed response to the security-related issues. In my view it gives the sense of purpose to the Croatian Armed Forces and the entire defence and security system. The effective solutions in that segment are to be found from the human capital within our system – competent, professional, motivated and patriotic – who will be the decisive element.  – they will be the determining factor.

Minister, You were a wartime commander of an elite brigade and You once stated that the Croatian Army was a brand to guard, Do we valour the Homeland War, and are we doing enough to convey the spirit, the pride and togetherness and pass the truth on the honourable military victories on the young generations?

It should be said that in the previous years the values and the achievements from the Homeland War were questioned. However, the Croatian people are aware that the magnificent Croatian victory was hard earned, waged by my fellow combatants, from eastern Slavonia to the southern most part of Croatia. I witnessed to the experience of the togetherness, which we were building, sacrifying everything we had, nurturing the victorious spirit. It is our permanent duty never to forget the historic achievement of the valorous, determined and honourable Croatian defenders.

In 2016 we are marking the 25th Anniversary of the tragic massacres in Vukovar and Škabrnja, which have obliged us never to forget history. Are we doing enough to preserve the truth from the oblivion?

The feat of the defenders of Vukovar and Škabrnja for the future of Croatia obliges us to respect and preserve the truth of the immense valour, willpower and sacrifice of the Croatia defenders.. The active contributors to the Croatian victories are vehemently tied to the decisive period of the Homeland War and are making efforts to keep those tragic moments within the collective memory and of collective pride.

The “Hrvatski vojnik“ magazine is marking its 25 anniversary in late November. As participant of the Homeland War, how do You see its role in the decisive moments of the recent Croatian history?

I still remember waiting impatiently for the every new issue of the magazine, to which I feel particularly tied as during the Homeland War it served as a manual to our soldiers. “Hrvatski vojnik“ covered daily the growth of the Croatian Armed Forces, their successes and victories. It has been a magazine of the Croatian defenders and later on of the victors. I believe that you are going to work hard, for the benefit of the Croatian defence system.

The fast spread of information, various communications platforms and new technologies have led to the adaptation and following of media- and AV contents-related trends. The new era has altered the role of magazines. What in Your view should the magazines and other communication channels (video, web, Internet, social networks) be focussed on?

The use of all available communication channels and platforms is an imperative of the moment. They abridge distances and the time, and make information readily available. It is at once a challenge and an option.  I would definitely welcome as many interactive content as possible – communication, details from the everyday working and living routine of our soldiers – they are the prime movers of our system, a guarantee of the stability and security of the citizens of Croatia.