Back to homepage »
Share:
The instructors of the International Military Operations Training Centre (IMOTC) "Josip Briški" concluded the B-level S. E. R. E. on 11 March 2021 in the barracks of the "116. Brigade HV” in Ploče on 11 March 2021.

The instructors of the International Military Operations Training Centre (IMOTC) “Josip Briški” concluded the B-level S. E. R. E. (Survival, Evasion/Escape, Resistance, Extraction) on 11 March 2021 in the barracks of the “116. Brigade HV” in Ploče on 11 March 2021. 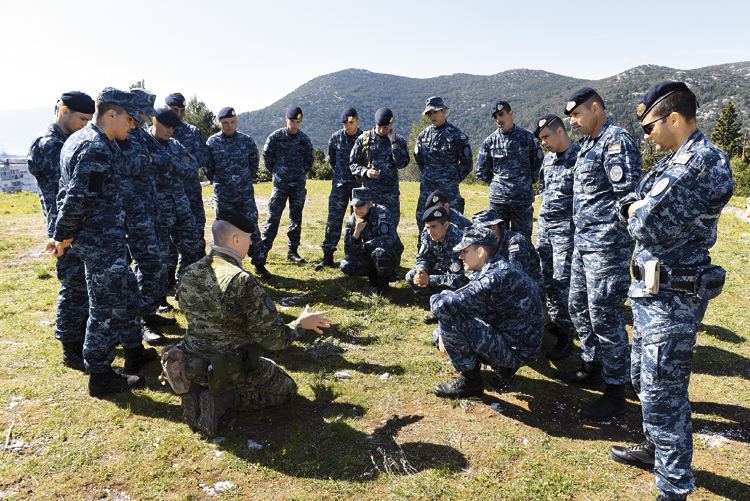 The trainees were the members of the Croatian Navy Maritime Infantry Company, who displayed high interest and motivation for the training, which enabled them to learn the procedures and techniques of survival, avoidance, resistance and extraction.

The potential harmful effect of isolation or captivity of individuals or force elements at various levels and the risk for the outcome of the operation have been known for quite some time.  For that reason NATO developed the PR (Personnel Recovery) doctrine, which comprises a complex system of measures and procedures aimed at extracting and reintegrating the members of national and friendly armed forces and civilian personnel deployed in support of NATO operations from isolation and/or captivity. In support of this doctrine all NATO member nations are obliged to administer the standardised S.E.R.E. training. 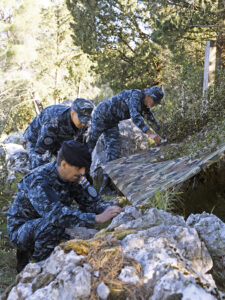 The standardisation for NATO members in ensured through the binding guidelines of the Allied Command Operations (ACO) and through the accepted STANAGs adopted as national military norms. The goal of the standardised training in Personnel Recovery was to attain the level of preparedness of the personnel declared for deployment to an area of operation where they run the risk of isolation/captivity.  The training is administered at three levels – A, B and C, in accordance with the risk assessment (low, moderate and high risk).

The Republic of Croatia has repeatedly affirmed itself as a credible and reliable NATO nation, and members of the Croatian Armed Forces have taken part and excelled in a number of NATO-led peace support operations. The S.E.R.E. training conducted by expert and experienced instructors of the IMOTC “Josip Briški” guarantees future readiness of Croatian soldiers to respond to the challenges of Allied peace support operations.

The IMOTC conducts the S.E.R.E. training at all levels for members of the Croatian Armed Forces and civilian officials engaged in the area of operations on their respective duties, and for members of the allies. The B-level  S.E.R.E. training has been developed in the IMOTC since 2014, and the graduates acquire the necessary survival, evasion, resistance, extraction principles to adhere to from the moment of possible isolation or captivity until extraction and reintegration.