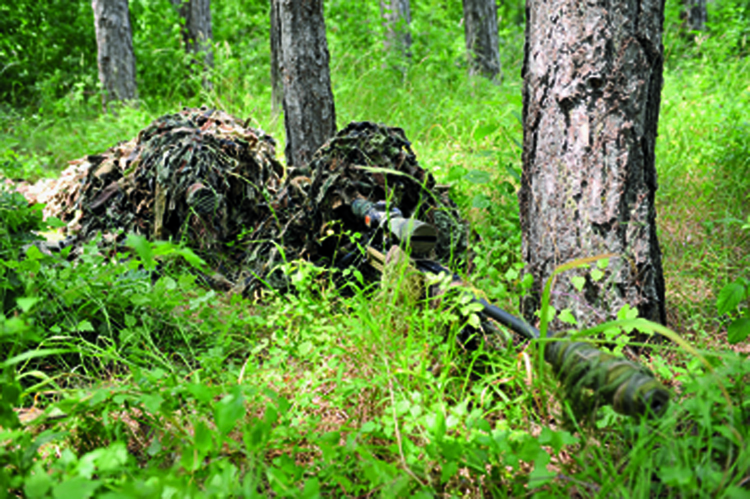 The sniper training event organised by the Special Forces Command held in the Josip Jović Barracks in Udbina in July (open to all members of the Croatian Armed Forces) was attended by ten members of the Special Forces Command and two members of the Intelligence Division.
The Commander, Sergeant Major of the Army Jozo Jurišić emphasised that the trainees (12 selected) were experienced and well-trained soldiers. Prior to the sniper training itself the soldiers had to take a series of tests (psychological testing, shooting, military expertise testing, the memory test and the testing on the simulator, as well as the obligatory physical readiness test).
Along with  these skills, the marksmen need to have patience, be good at calculating the height, wind and assessing the effect of other elements, such as the atmospheric conditions.
The trainees, hardly perceivable in prone position wearing camouflaged gear, are shooting the targets at 200 – 800 m. They operate in shooter – spotter pairs. When a shooter misses the target (defined in the table) the spotter makes corrections. They have to hit 10 targets with 20 bullets, the first bullet is worth ten points, and the second five points respectively. The required pass score at this stage is 75% .
The training lasts for 4 weeks, administered in the Special Forces Command barracks and in the shooting ranges at Grobnik and Udbina. is monitored by experienced instructors. Upon the completion of the shooting table, the trainees have to deal with tactical situations and perform shooting against unfamiliar distances, with the use of precision instruments.The training equipment includes the simulator as a very useful practice instrument. „The computer enables you to simulate shooting outdoors and to economise the ammunition. The skills acquired with the computer are later applied in the shooting range“.
The trainees undergo tactics and topography classes, which comprise camouflage, taking the shooting position unobserved, target spotting and distance relaying scheme, followed by target recognition and engaging.
The objective of the training is to prepare marksmen for precise shooting of targets within the infantry weapon range.

Daytime and nighttime operation equipment
The equipment used by the marksmen includes the sniper rifle equipped with a telescopic sight with variable magnification, the reticle, laser rangefinder and ballistic calculator, as well as the night vision devices, considering the high probability of operating at night time.