The Members of the Special Military Police Company of the MP Regiment and the Long-range Reconnaissance Company of the Special Forces Command conducted integration training at Udbina from 20 February to 3 March 2017. It was aimed at honing specific skills and abilities, exchange of experience and knowledge at practicing the joint operation in a real situation for which they had to be ready at any moment. Although serving different purposes and with different capability matrices, they share some similar military skills which in some situations should be integrated and the units operate jointly. Put simply: the members of the Long-range Reconnaissance Company conduct intelligence preparation, collect and analyse the date based on which special Military Police plans its own operations. Hence the importance of the joint training events, say Captain Andrej Smolek, the Commander of  Special MP Company and Major Petar Kampić, the Commander of the Long-range Reconnaissance Company.

During the first week the units practiced the tasks at the individual level – the members of the Special Military Police conducted the sniper training, day and night shooting, combat in poor visibility  and nighttime combat. The Long-reconnaissance Company conducted integrated training with the teams of military inteligence companies of the guards brigades. They trained the teams in the recce winter conditions tactics and procedures,  formation movement tactics , crossing of dangerous terrains, operating thermovision camera, laser rangefinders, the avalanche search and rescue gear and conducted reflex and situational shooting. The second week involved the practice in teams, integrated in a 24-hour joint exercise. The exercise engaged the sniper teams of the Special MP Company, the controllers equipped with night vision devices and optoelectronic devices for control and detection in the visible and invisible ranges, the handlers of military working dogs; the long-range recconnaiters and other elements of the Intelligence Division and the members of the intelligence companies of the guards brigades According to the exercise scenario, two long-range recce teams had to be prevented from infiltrating into the area of operations, intelligence reconnaissance, data collecting and safe exfiltration from the area.  The objective of the exercise was to assess the trainedness of the reconnaissance and MP teams. ”The exercise was a realistic practice – everybody was doing what they would be expected in a real situation. We deliberately created a highly complicated scenario. It was a first exercise of the kind for us and we did not know how it would end and that was the challenge“, said Major Kampić. He added that the capabilities and skills of the units were equally essential in conventional warfare as in counterterrorism. Captain Smolek said that for the Special MP the exercise served as a good platform for the practice of teams in search, apprehension and elimination of terrorist diversionists. The event continued the productive co-operation of the MP Regiment and of the Special Forces Command. Thw two units have executed a series of joint training cycles over the past years a continuation of the already good cooperation Regiment Military Police and SOD, which in previous years conducted several joint training cycles, starting with simpler training events, followed by more complex and higher-level drills. The training event at Udbina was the first one in 2017, to be folllowed by more to come. 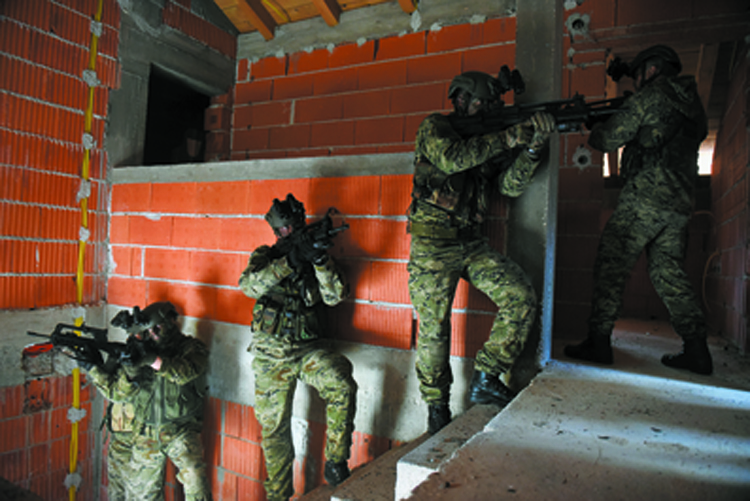 The two units have a series of training events in their 2017 schedule, to practice and upgrade the existing skills and capabilities. The Special MP Company is to conduct routine exercises (mainly  urban anti-terrorist operation), encirclement and search, the management of high-risk situations and training with the military working dogs, and will also conduct joint activity with the Special Military Police of the Armed Forces of the Republic of Slovenia and with the Military Gendarmerie of the Polish Armed Forces. The members of the Long-range Reconnaissance Company spend as many as 18 days a year in field training. Both units have a busy training agenda in the current year. Members of Military Intelligence Companies of Pripadnici VOS-a GOMBR-a

The event  also engaged the members of the military intelligence companies of the Guards Armoured  Mechanised and Guards Motorised Brigade, who compose the pool of forces for the Intelligence Division. The members of a Military Intelligence Team of the Guards Armoured Mechanised Brigade conducted a „classic“ reconnaissance task. They rated the events as an excellent opportunity to exchange experiences and acquire new skills – “new knowledge simply pours in“ and the junior members need as many such as events.  “Our duty implies receiving the knowledge administered by our instructors and we encourage one another. Our unit needs full cohesion and we need to do our best. We hope to see as many exercises of the kind and of such intensity  and with these instructors“. The trainees particularly underlined the experience, knowledge and professionalism of the instructors of the Intelligence Division.

We exchanged a few words with the sharpshooters of the Special MP Company in the break between two shooting sessions. All underwent the sniper training in the Special Forces Command. It takes calmness and composure coupled with the accuracy in shooting, which also depends on the quality of the weapon, ammunition and optical sight.  The training at Udbina was a practice event for them. Drill is their training. On one occasion they were expected to take a position, load the rifle and hit two 20-cm baloons at the distance of 300 m – all in 15 seconds. The best score was 7 seconds, the worst 11.5 secs. “Practice is essential, and it is the purpose of field training such as this one today“. The Commander of the Special MP Company stresses that sharpshooters are an essence of the tactical teams, providing support from the distance and can detect the targets and eliminate threats much more efficiently. They also have a high responsibility as they protect and assess the life-threatening situations for their colleagues. They always operate in pairs – each sharpshooter has his spotter. They have to be equally well trained, in view of the responsibility, but they make decisions on their own. What they also practice is patience – in the exercises they sometimes spend 10-15 hours in the supine position, but it is all part of their duty. There is no point saying that some aspect of it is more or less demanding. A professional will only think in terms of fulfilling the task. At Udbina they practiced shooting at distances up to 700m, the shooting using the NVG, timed and precision tests and created ballistic charts. Each ammunition series hass different ballistic properties and each requires the appropriate ballistic chart kept. “The job motivation and professionalism of the members are essential – they are ready to fulfill any assigned task. It is all about the human factor. Arms will function the same and destroy the given target at the given distance. When coupled with the human factor, a professional soldier you get an ideal combination“, says Captain Smolek. They praise the co-operation with the Intelligence Division. “We convey our specific knowledge, and exchange experience and grow. Our respective units possess operation specificities, and when we are on a same mission together it is beneficial to be familiar with them“, said Major Kampić and Captain Smolek.