Back to homepage »
Share:
The Survival, Evasion, Resistance, Extraction (SERE) training programme (at level C) was conducted for the first time in 2015, organised by the IMOTC. The purpose was to impart  the skills to be applied in the event of isolation behind enemy lines or capture till […]

The Survival, Evasion, Resistance, Extraction (SERE) training programme (at level C) was conducted for the first time in 2015, organised by the IMOTC. The purpose was to impart  the skills to be applied in the event of isolation behind enemy lines or capture till the extraction.

The 2015 pilot training evaluated successful, it was followed by the C-level training in 2016, which kicked off on 12 September with B level, engaging a total of 23 trainees from seven units and lasting until 16 September,. The trainees at the C level continued until 23 September. The most demanding was the segment administered outdoor from 19 – 22 September. The “Hrvatski vojnik“ team attended the final phase – the last 72 consecutive hours during which seven trainees were placed into a simulated situation of isolation and imprisonment. They were selected among the members of the Croatian Armed Forces with the specialties with inherent high risk of isolation in operations and missions (special forces members, scouts, military pilots and instructors).

“This year, the training incorporated  the lessons learned from last year, conducted in the Barracks” Josip Jović” at Udbina, explains the main instructor,  Major Zdravko Gagulić of the IMOTC from SMVO in the friendlier section of  the “Gakovo” Range before we left for the  wood.

“Last year’s pilot training showed that the synergy of know-how and the experience of various  units and excellent  instructors of the International Military Operations Training Centre (IMOTC),the Special Forces Command, the Air Force and Air Defence can produce a quality training programme of the kind”, said Major Gagulić. This year we have also engaged the members of the Military Police Regiment, we had two SERE specialists and instructors of the U.S. Air Force attended as visiting observers and advisors to upgrade the SERE training of the Croatian Armed Forces. 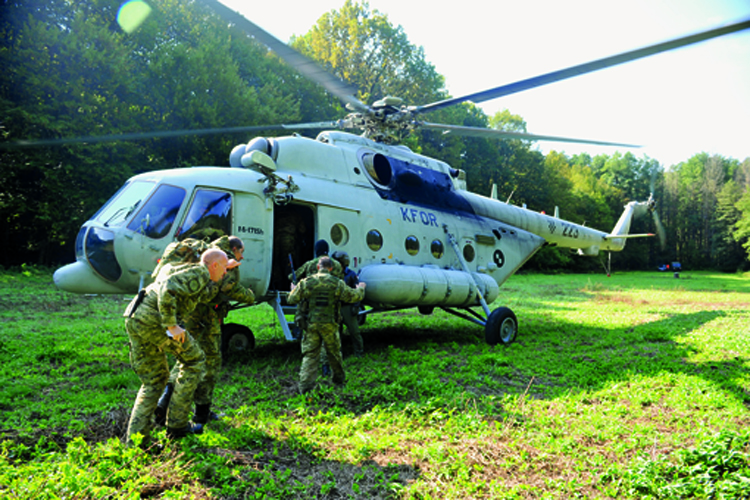 For the radio- communications equipment, the training was supported by the Signal Battalion, who conceded their ITT Spearhead system, which displays the location of the trainer with the GPS, facilitating the exercise on the safety side.

Following a briefing for the press we took towards the woods of Bilogora, and were briefed on a few more aspects – the exercise scenario needs to recreate all phases of SERE acquired and administered under the guidance prior to the exercise itself.  Accordingly, all trainees undergo the capture phase as well. The opposing force was played by the members of the Military Intelligence Company of the Guards Armoured Mechanised Brigade, who also benefitted from the exercise to hone their specialty skills.

The night prior to our arrival to the training range the seven trainees were exposed to physical and psychological strain and stressful situations (in controlled conditions and under the surveillance from the instructors, physicians and psychologists), as we learned having arrived to an outdoor spot surrounded by trees. Withoud the hint and the indication by our escort we would not have spotted the trainees among the trees. Their faces were camouflaged, but they were disarmed and serious, and their glowing eyes and slowed speech signalled what they had been through, although the outdoor experience itself (the cold, beasts, lack of water and staying in improvised settings) was the lesser  problem.

They are not just ordinary youngsters  but trained soldiers belonging to elite specialties, just like their instructors.“The experiences such as this only make a man stronger“said one trainee.

The procedures in the  final phase of extraction involved a contact with the contact with the friendly forces. Having determined the helicopter landing zone safety, the participants sent smoke signals from their position to the searching helicopter (Mi-171Sh), which arrived shortly with the extraction team aboard. However, the extraction is not what they saw in war films; it involved the friendly capture. Armed soldiers, wearing balaclavas jumped out of the helicopter and ran towards the trainees, who were kneeling and held raised arms. A part of the extracting team searched and identified them while others were searching the nearby woods. Seven trainees (armed) were taken to the helicopter, which immediately took off. The reintegration was due to return them to normal functioning, with the aid from psychologists, doctors and intelligence, who are tasked with the identification, the diagnosis of the trainees’  physical and mental condition and collecting of information on what they have heard, seen and experienced.

“All participants were fine at the end of the exercise ; tired and hungry –yes, but satisfied with the outcome. We shall take care to upgrade the training year by year. Our instructor team, collaborating with their counterparts from other services of the Croatian Armed Forces, are definitely ready for the challenge of the kind“.