Back to homepage »
Share:
“I am very glad to state that for the first time in its history in 2017 the Ministry of Defence had no classified procurement procedures, and we intend to see that in 2018 too" stated Minister Krstičević 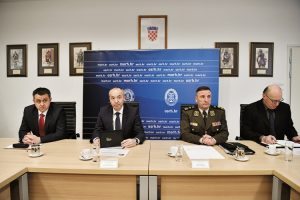 The Procurement Plan of the Ministtry of Defence of the Republic of Croatia for the current year was presented and the 2017 Plan was reviewed on 31 January 2018. The presentation was attended by the Deputy Prime Minister and Defence Minister Damir Krstičević, the Chief of the General Staff of the Croatian Armed Forces, General Mirko Šundov, the members of the Defence Committee of the Croatian Parliament headed by the Chiarman Igor Dragovan, the members of the National Council for Monitoring the National Anti-Corruption Strategy and the representatives of the civil society associations.  “I am very glad to state that for the first time in its history in 2017 the Ministry of Defence had no classified procurement procedures, and we intend to see that in 2018 too. Our priority are  transparent and legally managed procurement procedures, responsible and cost-effective management of the state budge; The citizens of Croatia have the right to the information how the government is using their money, as good housekeeper we are obliged to manage the funds wisely to maximise the benefit for the defence system and Croatian soldiers“. Minister Krstičević also stated that the Ministry of Defence of the Republic of Croatia supported the development of the Croatian defence industry; the Ministry is signing contracts worth 281 mil  HRK (ca 3.78 mil EUR) with 26 businesses in Croatia, which exceeds the 2017 figures by 45 mil HRK. Presenting the Procurement Plan of the Ministry of Defence in 2018, the Head of the Ministry’s Public Procurement Sector, Colonel Ivica Devčić underlined that the procurement procedures were focussed on upgrading the living and working conditions for the members of the Croatian Armed Forces, equipping and the proper maintenance of material assets used by the Croatian Armed Forces, and stated that the 2017 Plan was realised almost completely (99 %), and the few remaining projects were deferred until the current year. The past year saw as many as 1,243 procurement procedures and 1,588 contracts signed, among which the overhaul of the Mi-171Sh helicopters, the procurement of remotely controlled weapon statioons and of the anti-armour missile system for the “Patria“ vehicles; facilities were built and standard training kits for all members of the Croatian Armed Forces, and the expedition camp as a new capabiltiy to be employed in support to the civilians and state institutions. 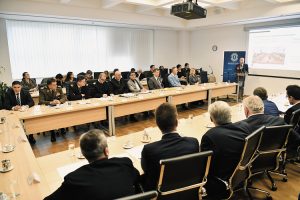