Back to homepage »
Share:
The Croatian Prime Minister Andrej Plenković congratulated the Ministry of Defence and Minister Krstičević and the representatives of the Croatian industry 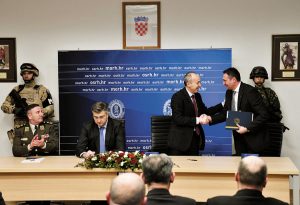 The Minister also said that the contracts are signed early in the year, to enable the firms to plan and run their business efficiently, and that the co-operation with the Ministry  provided the Croatian military industry with the business references and recognisability necessary in the international market. The representative of the Joint tenderers (also the director of KROKO Proizvodnja i razvoj d.o.o. military gear manufacturer) Žarko Popović, signing the contract for the provision of combat unifors and the Representative of the Footwear Manufacturer Association and Chief Executive of “BOROVO d.d“ (the leading firm of the Association) Gordana Odor and the representatives of the firms – Željko Pavlin of the HS Produkt d.o.o, Alojz  Šestan of “Šestan-Busch d.o.o., Zoran Koščec of Varteks Pro d.o.o. and Darko Grbec of Đuro Đaković Specijalna vozila d.d. extended appreciation to the Ministry of Defence and Minister Krstičević for the trust invested and the years-long co-operation with the Croatian firms. “The contracts affirm the Ministry’s credibility and the policy to equip the Croatian Armed Forces members with the domestic-made products, which is of great importance for the Croatian manufacturers’ exporting deals.  We welcome the future co-operation as well, and the technological upgrade of the products“. The contracts have been concluded for the provision of the combat, field and protective gear, the maintenance of air assets, the M 84 tank upgrade, messing, cleaning services, transportation and insurance of the active duty personnel. 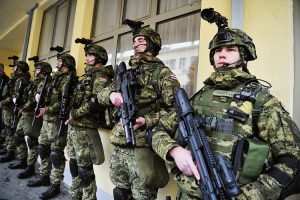 The agreed procurements include 52,951 combat uniform sets  7,830 waterproof gears,  94,110 pairs of socks,  3,259 pullovers and 177 firefighter gears, 17,283 pairs of footwear (7,436 pairs of combat boots), 151,515 underwear items, 12,845 service and mess uniforms, 1,273 headwear items,  170 bags, 1,000  helmets, 200 VHS-D2 and 80 VHS-K2 assault rifles and 25 XDM-9 4.5 pistols. Prime Minister Plenković, Minister Krstičević and the Chief of the General Staff of the Croatian Armed Forces with their staffs and the representatives of the Croatian firms toured the static display of the weapons and equipment in the Ministry of Defence’s premises. Prime Minister and Defence Minister previously had visited the mess hall in “Croatia“ that was refurbished in 2017, and praised the new facility, meeting NATO standards and upgrading the living and working conditions for the military personnel working in the Barracks. They also paid respects at the Memorial Monument to the 1st Guards Brigade  of the Croatian Army (“Tigrovi“) in the barracks.